Some of my favorite investments are those in companies that are highly visible.

It’s wonderful to drive by a building, knowing that the company that occupies it is working hard on your behalf, generating increasing profits which will very likely fuel increasing dividends.

Highly visible is just another term for ubiquitous.

And I can think of few things more ubiquitous than the corner pharmacy.

[ad#Google Adsense 336×280-IA]Pharmacies have been around about as long as we’ve been a country.

They provide not only medicine, but also small goods that people need on a day-to-day basis – toothpaste, razor blades, bathroom tissue, etc.

While we invest in what’s yet to be, not what has already happened, I find it incredibly unlikely that pharmacies will no longer be in demand over the next decade or two, which makes them a fairly sure long-term bet.

Even better if you can invest in pharmacies that reward their shareholders with increasing dividends, which can provide a source of rising cash flow that one can use to one day pay for expenses.

And one pharmacy does this probably better than all the competition: Walgreen Company (WAG).

Founded at the beginning of the century, Walgreen has gone on to become what is now a $72-billion retail pharmacy chain that operates across North America.

This is a great position to be in. After all, there are huge demographic changes in play here in the US, with a growing population of aging baby boomers. Some of these people will almost surely need prescription medications, and WAG’s huge network puts them in a prime spot to service these additional customers. In addition, a changing healthcare landscape which seeks to insure the previously uninsured means there is potentially a larger pool of customers from which WAG can draw from.

Let’s take a look and see what kind of results WAG has posted over the last decade, which will give us some incredible insight as to just how lucrative being one of the largest drugstore chains in North America can be.

The growth in earnings per share will give us a better idea as to the health of the organization, as that is the growth in profit. EPS increased from $1.52 to $2.00 during this period. That’s a CAGR of 3.10%. It should be noted that FY 2014’s results were heavily negatively impacted by an adjustment to a call option related to the acquisition of Alliance Boots.

S&P Capital IQ is predicting that EPS will grow at a compound annual rate of 15% over the next three years, which seems to be more in line with their historical average.

Walgreen actually has one of the lengthier dividend growth streaks out there, which may surprise some. The company’s record of 39 consecutive years of dividend increases is impressive and means that it’s featured as a “Champion” on David Fish’s Dividend Champions, Contenders, and Challengers list.

Perhaps just as impressive is the rate at which the dividend has increased – the 10-year dividend growth rate stands at 22%!

The yield is low here, at 1.76%. That’s even low for a stock like WAG that typically offers a somewhat low yield, as the five-year average yield is 2%.

While the payout ratio of 63.7% appears a bit high, this is an illusion due to the non-cash charge that affected EPS for the fourth quarter of FY 2014. WAG typically sports a much lower payout ratio, and the dividend is in no danger here.

The yield’s a tad low, but the growth is astounding.

Meanwhile, the company is extremely conservatively managed from a debt standpoint.

The long-term debt/equity ratio is just 0.18, while the interest coverage ratio is over 50. If you’re looking for a company that manages debt responsibly, WAG is a good bet.

Profitability is solid in relative terms, as the fundamentals compare well to peers. Net margin has averaged 3.15% over the last five years, while return on equity averaged 13.73%. Perhaps not great numbers in absolute terms, but this is in line with competition.

Walgreen is incredibly well-positioned to capture growing prescription business as well as quick trips to the store for basics, due to their huge network of stores and visible brand. In addition, they’re aggressively expanding internationally via the aforementioned acquisition of Alliance Boots. I actually regret not buying WAG years ago and adding it to my portfolio when it was much cheaper, but you just can’t win them all. WAG operates at a high level year after year, which is admirable. Shareholders should be pleased.

Due to the quality, WAG is a stock that is in high demand. The stock is up over 33% YTD, which is a trouncing of the S&P 500 index over that same period. The P/E ratio of 36.07 isn’t really comparable due to the adjustment to earnings, but even taking away the $0.90 fourth quarter adjustment means shares are trading hands for a P/E ratio north of 25. That’s much higher than the five-year average ratio of 16.6.

I valued shares using a dividend discount model analysis with a 10% discount rate and an 7.5% long-term growth rate. That growth rate is on the upper end of what I normally use, but it seems warranted here given WAG’s long-term dividend growth rate and its typical EPS growth. In addition, EPS is expected to grow at a robust rate over the foreseeable future, which should fuel further dividend raises. The DDM analysis gives me a fair value of $58.05. 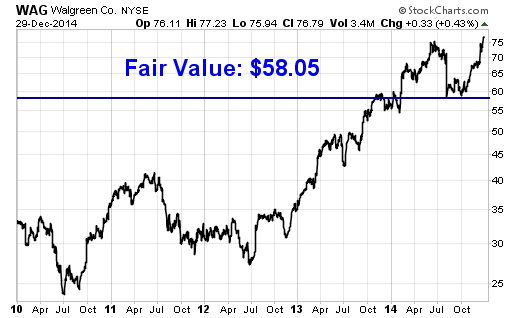 Bottom line: Walgreen Company (WAG) is one of the largest retail drugstore chains across North America and is also expanding internationally. The long-term changes in demographics and healthcare operate as additional tailwinds for the company, which could bode well for shareholders. Their long-term dividend record is one of the most impressive out there, and I see no reason why the dividend shouldn’t continue to grow at an attractive rate. Shares aren’t particularly cheap here, but this is a high-quality stock that should be considered on pullbacks.