I’ve often talked about investing in companies that kind of form the backbone of the economy.

These are typically companies that might sound boring, but they provide necessary services and/or products that, without their existence, could lead to a to a possible collapse in certain aspects of our day-to-day lives.

Companies in the industrial space are a good example of this phenomenon.

[ad#Google Adsense 336×280-IA]Though your average consumer might not have any idea how a number of items we take for granted are manufactured, you can bet these same goods didn’t magically appear out of the thin air.

There are real companies out there producing real goods that real people need and use on an everyday basis.

One company in particular provides products that are vital to a wide range of manufacturing applications, and it’s been increasing its dividend for the past 32 consecutive years.

This company might not be a household name, but I’m sure 32 years of consecutive dividend raises probably grabs your attention.

You probably haven’t heard of it, but it is featured on David Fish’s Dividend Champions, Contenders, and Challengers list as a “Champion”. The CCC list includes more than 560 stocks that have increased their dividends for at least the last five consecutive years, and Champions are those stocks with more than 25 years of such raises. Not bad, right?

I can tell you I’m fairly familiar with the company as a shareholder.

And I’ll discuss exactly why I’m a shareholder today.

A reliable supply of industrial gasses is vital to a number of production processes, which means that APD is able to sign long-term contracts. These contracts are generally 15-20 years in length, which provides solid visibility for future revenue based on a steady stream of cash flow. Air Products is actually the world’s largest supplier of hydrogen and helium. They command approximately 40% of the global hydrogen capacity, which is about twice as much as its largest competitor.

They’re also diversified across the globe, as their consolidated sales are broken up by destination. US/Canada accounted for 41% of these sales; Europe, 26%: Asia (excluding China), 15%; China, 10%; and Latin America, 8%.

APD has actually posted some fairly solid numbers in regards to growth metrics over the last 10 years, so let’s take a look. Their fiscal year ends September 30.

Earnings per share grew from $2.64 to $4.68 during this period, which is a CAGR of 6.57%. It appears that the company hit a stunted growth pattern around 2012 which has impacted the top line and bottom line over the last two years.

S&P Capital IQ predicts EPS will grow at a 9% annual rate over the next three years, citing continued acquisitions and on-site gas projects in Asia. So it’s possible the company will be right back on track, and growing at a faster rate more in line with the stretch from 2004 to 2011.

So I mentioned above this company has a 32-year streak of consecutive annual dividend increases.

That’s impressive in its own right, but it gets better. Over the last decade, APD has increased its quarterly dividend at an annual rate of 12.2%.

The dividend growth rate is higher than what EPS has increased at over the last decade, which has led to a moderately high payout ratio, at 67.1%.

The stock yields 2.29% right now, which is a bit below its five-year average, but higher than the broader market.

Not excellent numbers in absolute terms, but these numbers compare favorably to peers.

Profitability appears solid, and in line with major peers. Net margin has averaged 10.37% over the last five years, while return on equity has averaged 17.23%. These numbers are sound all by themselves and compare more or less with the other major competitors in this space.

It appears the one thing separating APD from some of the competition is that they also have exposure to materials and electronics, which has been hampering some of the growth that lies in gasses. The company has responded by shedding non-core businesses over the last few years, including assets in healthcare and polymers.

I typically love investing in the biggest and best in any space. This allows a company economies of scale, which is a competitive advantage. This provides a company the ability certain pricing power, which they can leverage into extra business. And as stated earlier, APD is the world’s largest supplier of industrial gasses hydrogen and helium. I always love investing in the world’s largest. That’s because they got there for a reason.

The company is fantastic with a long-term track record of dividend raises and offers the biggest in its space; however, there are risks to consider. Primarily, the global economy can change demand for APD’s products via any slowdown in general manufacturing. In addition, there are input costs to consider, especially in the chemicals space.

Shares in Air Products trade hands for a P/E ratio of 29.34 right now, which seems a bit high here. The five-year average is 19.3, so there appears to be a rather large premium here. I enjoy investing in wonderful businesses, but not at any price.

I valued shares using a dividend discount model analysis with a 10% discount rate and a 7% long-term growth rate. This growth rate is in line with their earnings record over the last decade, but also well below the dividend growth rate over that time. That’s because of the high payout ratio. However, the company is expected to grow earnings at a faster rate over the next three years, which could allow the company to simultaneously compress the payout ratio and give out solid dividend raises. The DDM analysis gives me a fair value of $109.85. 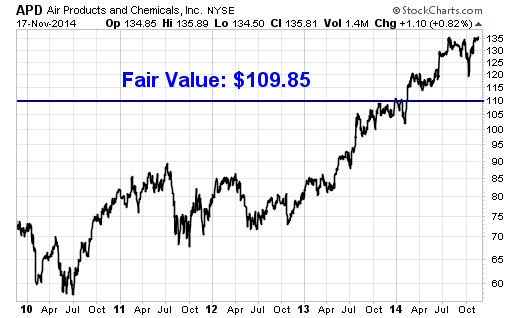 Bottom line: Air Products & Chemicals, Inc. (APD) has been increasing its dividend for 32 consecutive years. It’s by far the biggest in its space, and arguably the best. Growth has been a little slow over the last couple of years, but the predictions call for the company to get back on track in short order. However, the company appears just plain expensive right now. I’d wait for this industrial gasses giant to float back down to earth in regards to valuation before buying its stock.