The S&P 500 has now recovered everything it lost during the first two weeks of October. And it is back to trading at all-time highs.

But I’m still skeptical the market correction is over… 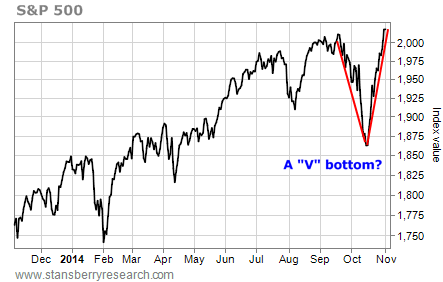 The S&P rallied to a new all-time high on Friday. It has plowed through every resistance level.

If you had offered me 20-to-1 odds of this happening two weeks ago, I wouldn’t have taken the bet. A “V” bottom like this is the Loch Ness Monster of the stock market.

But most folks have never seen one.

Yet, it’s what we’re seeing today.

We are entering a seasonally strong time of the year for stock prices.

So stocks could continue even higher from here.

But as I wrote last week, corrections usually unfold in either three- or five-legged patterns.

The “V” pattern only has two legs: one down and one up. We need one more leg down to complete the correction.

And then there’s the NYSE McClellan Oscillator (the “NYMO”)… 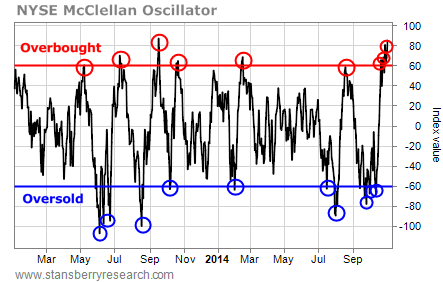 Notice how the NYMO moved consistently between overbought and oversold readings for most of the past two years. But look at the cluster of oversold readings we got earlier this month – in the midst of the market correction. It’s that cluster that kept me from selling stocks short into the decline. Instead, I was looking to buy stocks.

Now… look at the cluster of overbought readings that just occurred. This is what is keeping me from wanting to buy stocks at the moment. Aggressive traders can even use this cluster as a reason to take a modest short position as the market backs off from its overbought conditions.

In short, I don’t trust the stock market right here. It looks vulnerable to another leg lower. Once we get that move out of the way and start seeing some oversold conditions, we can start looking at the possibility of a year-end rally.

Until then… it’s best to stay cautious.