More goods are moving across the world than ever before.

The economy is now global, meaning countries and consumers alike are buying goods from all over the world.

Furthermore, there are more people alive than ever before, and more of these people are now moving up into middle classes, thus increasing demand for food, energy, and consumer goods. And these goods have to get from point A to point B somehow, right?

[ad#Google Adsense 336×280-IA]Keep in mind that it’s not just your basic goods that have to get transported.

Think energy, cars, food, chemicals, construction materials, and everything else that keeps the world turning.

But one of the oldest, most entrenched, and cheapest ways to move goods is by rail.

Yes, I’m talking about stodgy old railroad companies. But hear me out.

This is a company that has huge competitive advantages.

First, the barrier to entry is extremely high. After all, you can’t just go out and build a railroad network from scratch. The railroad networks that are already in existence in this country are pretty much all that’s ever going to be.

Second, they have a cost advantage in that they can move a ton of freight approximately 450 miles on a single gallon of diesel fuel. That’s about four times more efficient than a truck. This means if energy supply picks up, NSC’s volume will increase as it moves more coal and oil. If supply drops, the cost of gas increases and rail transport becomes even more attractive.

So let’s take a look at this railroad.

We’re taking about a company that has roots stretching back to the late 1800s. A lot has changed over the last 100+ years, but railroads are still here. Furthermore, I believe the odds are very good that railroads will still be around for decades to come. And as long as more goods move across the country in the future, railroads will make more money.

They’ve been pretty good at making more money in the past, and I’ll show you how that looks. Their fiscal year ends December 31.

Earnings per share increased from $2.31 to $6.04 during this time frame, which is a CAGR of 11.27%. Not too shabby for an old-fashioned railroad! Part of this growth was fueled by share buybacks, which saw the shares outstanding go from about 400 million to approximately 316 million.

S&P Capital IQ predicts EPS will grow at a compound annual rate of 10% over the next three years, which is roughly in line with their average over the last decade.

So the earnings growth is great. But is the company sharing a piece of that profit pie with shareholders?

The answer is an unequivocal yes.

NSC has increased their dividend for the last 13 consecutive years. That means they’re featured on David Fish’s Dividend Champions, Contenders, and Challengers list as a “Contender”.

And it gets better. Over the past five years, they’ve increased their dividend by an annual rate of 10.8%. That’s just under the growth rate in earnings, which means the company is being conservative.

The stock yields 2.08% right now. Not earth shattering, but not bad either. And the payout ratio, at 35.5%, leaves a ton of room for future dividend raises. The company could actually increase the dividend at a rate that exceeds earnings growth, but I love the conservative approach. Leaves a lot of room for error.

The company’s balance sheet is leveraged, but not surprising considering the industry and capital requirements.

Not as conservative as I usually like to see, but this is in line with competing railroads.

Profitability metrics look very sound. Net margin has averaged 15.73% over the last five years, while return on equity has averaged 15.8% over that period. These numbers compare favorably to the competition.

Railroads offer a lot to like. It’s a business that’s been around for a very long time and one that’s extremely easy to understand. As long as more goods need to be moved here and abroad, Norfolk Southern should do well by collecting a percentage of that volume.

And as their volume increases, so does their freight revenue. More revenue means the company has a bigger base of income with which to drop down to the bottom line and share with shareholders in the form of an increasing dividend. The company currently sports a rather modest payout ratio, meaning the dividend is very secure, even with bumps in the general economy along the way.

I’m a shareholder in Norfolk Southern, so I put my money where my mouth is.

Guess who else is a fan of railroads? None other than Warren Buffett. Through Berkshire Hathaway, he bought the entirety of Burlington Northern Sante Fe railroad in 2010. It’s now a subsidiary of Berkshire.

Of course, there are risks. It’s a capital-intensive business, meaning that heavy capital expenditures in some years can limit free cash flow. In addition, labor costs can be quite high. Furthermore, railroads are exposed to the general economy. The volume of general merchandise, intermodal business, and coal that they transport is subject to larger macroeconomic trends and energy demand.

Shares trade hands for a P/E ratio of 17.05, which while in line with the broader market is quite a bit higher than NSC’s five-year P/E ratio average of just 14.8.

I valued shares using a dividend discount model with a 10% discount rate and a 8% long-term growth rate. That growth rate appears conservative when compared to Norfolk’s earnings growth history, dividend growth record, and predicted earnings growth rate over the foreseeable future. This gives me a fair value of $123.12 on shares, which provides perhaps a small margin of safety right now. 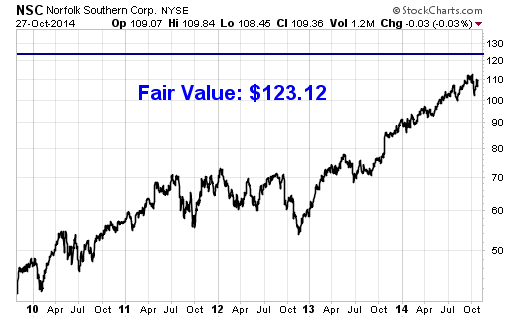 Bottom line: Norfolk Southern Corp. (NSC) provides an absolutely necessary service in the form of transportation. And it offers it at a cheaper rate than competition, while also enjoying substantial competitive advantages due to an extremely high barrier to entry. Meanwhile, the company has been increasing its dividend to shareholders at a healthy clip over the last decade, and I see no reason this will stop anytime soon. Shares appear attractively valued here, providing a great opportunity for a retail investor to invest in this age-old business model. All aboard!