[Last time], I explained the easiest way to make huge returns in the natural resource market. The greatest investors use this strategy to make millions.

It’s one that offers huge upside… and little downside.

When the price of a resource like oil, copper, or cotton soars in price, people begin to use less of it, while producers tend to produce more of it.

On the other hand, when the price of a resource stays low for an extended period of time, people begin to use more of it, while producers tend to produce less of it.

That’s the set up we’re seeing today in the uranium market.

Uranium is the fuel used in nuclear power plants. It has experienced an extreme boom and bust cycle over the past 10 years. Take a look: 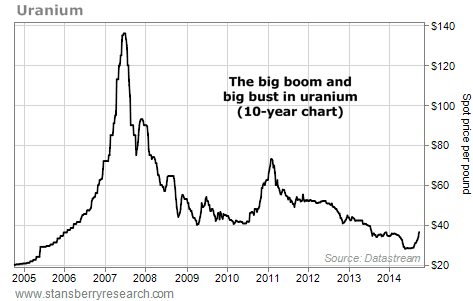 As you can see, uranium prices “boomed” from 2005-2007, hitting a high of more than $130 per pound. Then followed a “bust” until 2010, where prices got as low as $40 per pound. Just as the market was beginning to recover in early 2011, the Fukushima nuclear power plant disaster happened. Prices collapsed as Japan closed nuclear plants and sold its uranium supplies.

Ever since, uranium has been one of the world’s most hated resources. And earlier this year, prices reached their lowest level in nine years.

But that’s not likely to last. Here’s why…

Today, uranium trades at $36.50 per pound. The average cost to produce one pound of uranium is almost twice as much – about $70. Many producers are losing money on every pound of uranium they sell. That can’t last…

These businesses will either slow production or go out of business. Either way, supply is likely to dry up.

And despite the lip service of governments and nuclear-power critics, demand for uranium is still strong and expected to grow…

Nuclear power currently produces about 20% of U.S. electricity. It’s the source of about 11% of the world’s electricity. And developing countries – particularly China and India – will rely heavily on nuclear power going forward. China plans to triple its consumption by 2030. India plans to increase it more than 10-fold by 2050.

As supply begins to dwindle and demand continues to grow, basic economics tells us that the price of uranium must go up. The only question is: “When?”

We can’t know exactly when it will happen. But because we’re so close to the bottom, the downside risk while we wait is minimal.

And things may be starting to go in our favor…

Cameco (CCJ), the world’s largest uranium miner, announced in August that it shut down its McArthur River mine and its Key Lake mill in response to the union’s decision to strike. McArthur River is one of the largest and highest-grade uranium mines. It accounts for more than 10% of the world’s uranium production.

On August 30, Cameco locked out its 535 unionized employees at the two locations. Cameco will continue to honor its customer contracts with production from its other sites and from inventories.

But this has already affected the industry. The spot price of uranium had fallen to $28 at the start of July. As I mentioned, it’s now $36.50 per pound. The market had left the metal for dead, so this is a huge move.

As I mentioned [in my previous article], when buying into a cheap and hated resource market, it’s typically a good idea to wait for a new uptrend to form. Well, this may be the start of our new uptrend.

In my S&A Resource Report newsletter, I’m recommending shares of Cameco. Right now, we can buy CCJ for about $18 per share. My recommended stop is at $16 per share. That means our downside is just $2 per share. During uranium’s last boom in 2010, shares reached $40. They could reach that level again in a bull market… and produce a gain of $22 per share.

So our potential reward is 11 times greater than our potential loss. It’s a great risk/reward set up. All you have to do is follow the tried and true method of buying cheap… and then wait for the next boom.

Sponsored Link: In the latest issue of the S&A Resource Report, I discuss another great opportunity in the natural resource space. It involves a new loophole that’s allowing a select few companies to export U.S. crude oil. This development could lead to huge gains for the stock I’m recommending… and it pays a yield of 4.5% while we wait. You can access this and all my other research with a risk-free trial subscription. You can get all the details right here (this does not link to a long video).