Are you worried about the government printing trillions of dollars and creating inflation?

Then it may surprise you to hear that deflation is a greater threat than inflation today to institutional investors.

According to a recent Bloomberg poll of institutional investors in Europe, “77% viewed disinflation or deflation as a greater threat than inflation.”

This is the big story…

There are good arguments on both sides.

But I expect that, ultimately, inflation will win out.

Governments are bad at a lot of things… but one thing they do well is print money.

Governments are deathly afraid of deflation…

They much prefer inflation for many reasons.

For example, inflation makes people feel like they’re making more money each year, and when a government prints money, it makes its existing debts “cheaper” to repay.

Right now in Europe, Mario Draghi (the head of Europe’s Central Bank) is fighting deflation with all he has… In a historic move, he cut interest rates to BELOW zero. And just last month, he announced he wants to “give” $1 trillion to the banks – he wants to print money.

In short, Draghi wants to follow the U.S.’s script of the last few years – by cutting interest rates to record lows and printing money. He wants to create the “Draghi Asset Bubble,” and he doesn’t mind if the euro currency falls while he’s doing it.

You can see Draghi’s plan at work in the one-year chart of the euro. As I told you [earlier this week], it has followed our “script” and plummeted in value. This is going to stimulate the European economy… and drive European stocks higher. 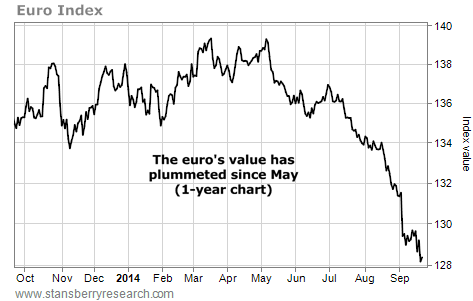 My readers have made a ton of money in the last couple years in the U.S. on this idea, following our “Bernanke Asset Bubble” script. (The Bernanke Asset Bubble is the idea that the Fed would keep interest rates lower for longer than anyone could imagine. This would cause asset prices – like stocks and real estate – to soar higher than anyone could imagine.)

And now we’re seeing “The Sequel” setting up in Europe…

Europe has plenty of room to follow the U.S.’s lead from a few years ago. As we’ve shown you, European stocks are cheap. Unemployment today in Europe is still over 10% (compared with America’s 6% today). And inflation in Europe is flirting with zero – a long way from the “goal” of 2%.

So far, the Draghi Asset Bubble has had trouble getting started. But if Draghi can get the match lit, we can make money for years in Europe as asset prices catch fire.

I think governments around the world will eventually succeed with creating inflation. That means taking extraordinary measures like the one that has crashed the euro. A weaker euro will improve corporate profits, further helping European stock prices.

The best way to take advantage of the situation is to buy the WisdomTree Europe Hedged Equity Fund (HEDJ). As I explained in this recent DailyWealth essay, HEDJ gives us all the upside of European stocks… but protection from any further falls in the euro. Check it out!