Would you loan money to a risky company at just 5.5% interest?

You probably wouldn’t. You’d probably want a much higher interest rate to compensate you for loaning money to a questionable company. Taking a big risk for not much return is a terrible deal.

Yet… right now, many of our fellow investors are buying up these terrible deals. In a moment, I’ll show you a MUCH better alternative for safe income that’s yielding almost twice as much.

[ad#Google Adsense 336×280-IA]But first, let me explain why these popular high-risk loans are such a terrible deal right now…

High-yield bonds (also called “junk” bonds) are loans to some of the riskiest companies on the market.

Junk bonds often offer high interest rates to compensate investors for the increased risk of loaning to these firms.

Because of the higher interest rates, investors are drawn to them.

To get a sense of what that really means, compare it with 10-year U.S. Treasury bonds, which yield 2.5%.

The difference between the yields of different classes of bonds is called the “spread.” And as the graph below shows, these spreads are as narrow (also known as “tight” in bond-speak) as they have been in my lifetime. 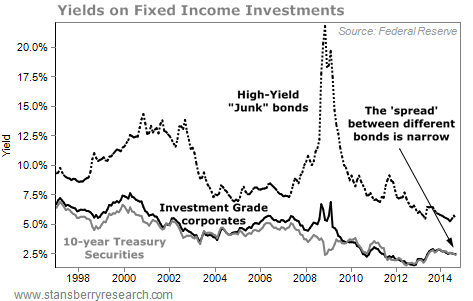 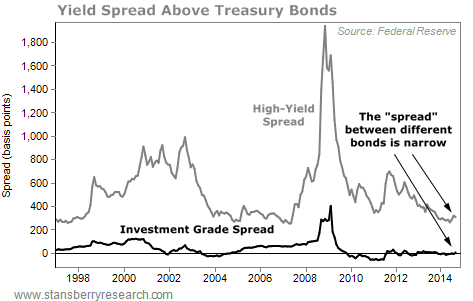 Remember, U.S. Treasury securities are considered “risk-free” – meaning they’re priced as though the U.S. government cannot default. But the current spread versus corporate bonds is so tight, you get essentially no extra yield for taking on the risk that a company may default and fail to pay its bonds. This is wacky.

And the spread for high-yield bonds is as low as it has ever been. That means we’re not getting compensated for the risk of default or changing interest rates.

Why would you buy anything but super-safe Treasury securities if you’re not getting paid anything for your trouble? When stocks aren’t showing great values and bonds are low-yielding, shouldn’t we start moving more money to cash?

I’d say yes, if we faced the risk of a recession or the economy weren’t getting better week by week. But that’s not what we’re seeing.

We’re not worried about a serious bear market in stocks. It’s more likely that stocks will have a normal correction of 5%-10% or post weaker returns in the near future while the fundamentals catch up. As for bonds, I think it’s time to jettison any high-yielding bond funds or corporate bond funds.

But with yields so low, it doesn’t make sense to move much more to cash given that yields on savings accounts and money-market accounts are practically zero.

One safe income alternative that I’ve been recommending to my Retirement Millionaire readers for the past few years is closed-end municipal bond funds. For instance, the Invesco Muni Value Fund (IIM), which I’ve mentioned here before.

As regular readers know, municipal bonds are loans made to state and municipal governments. To encourage folks to invest in the government, interest received from “munis” is exempt from federal income tax. And if you live in a zero-income-tax state, you’ll pay $0 in taxes on your income.

This tax advantage leads to a huge boost in the income you can keep.

For example, if you earn $1,000 in annual interest on a taxable investment, and you’re in the 28% tax bracket, you’ll pay $280 in taxes to the government… and keep $720. These days, earning income like that takes a lot of work, so why give it up?

Plus, municipal bonds are safer than “junk” bonds…

But when you talk about better-rated munis, like the average A-rated bonds that make up the bulk of IIM’s portfolio, the default rate drops to 0.02%.

And as I write this, IIM is trading more than 9% below the value of its net assets – which gives us an extra layer of safety.

Of course, there’s no guarantee that the price of the fund won’t fall. So this isn’t something you want to put ALL your savings into. But these bonds are backed by the taxing power of state and local governments. And they’re insured against default. A fund like IIM is a safe choice for a good portion of your portfolio (up to 5%).

Yield is hard to come by these days… but don’t chase the yield in these high-risk “junk” bonds. Instead look at cheap, closed-end muni funds like IIM. You’ll earn more income with a lot less risk.