Most experts don’t want to admit it… but there’s actually plenty of room for stocks to go much higher from here – even through the end of 2016.

We certainly have some signs of a market top out there… But before you sell everything, I urge you to seriously consider today’s essay.

[ad#Google Adsense 336×280-IA]Most folks are scared of what happens when the Federal Reserve raises interest rates.

But if you share that concern, I have an important message for you…

So when will it finally happen?

When will the Federal Reserve finally raise rates?

If we look to the Federal Reserve committee members, the answer is clear…

Last week, the 16 members of the committee gave their best guesses for interest rates at the end of the year for the next three years.

Clearly, the Fed will not raise interest rates this year. Clearly, they will raise them sometime in 2015.

What exactly will it mean for stocks when the Fed raises rates next year?

Most people think “it’s all over” when the Fed raises interest rates. But history tells a different story… 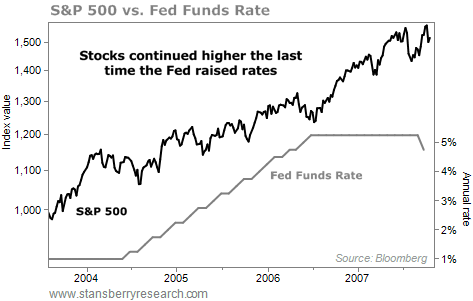 Interest rates soared. And so did the stock market.

This wasn’t a one-off occurrence. Over the last 30 years, every time rates have gone up, stock prices have gone up. (I fully explained this idea in my March 10 DailyWealth.)

Why have stock prices gone up every time the Fed has raised interest rates over the last 30 years?

In short, people see the hike in interest rates as a sign that the economy is doing better – that it doesn’t need help from the Fed anymore. So they buy stocks.

So you don’t want to sell just because we reach the end of zero-percent interest rates – based on history, that would be foolish.