If you don’t already own platinum, it’s time to start thinking about investing.

In January, I told you platinum was one of my favorite natural resources going into 2014. And in March, my colleague Jeff Clark said it could be the big winner in the precious-metals market this year.

And we’re about to have the opportunity to buy it for a big discount.

Platinum is a precious metal that is incredibly useful in industrial applications.

As a result, there’s an enormous demand for it.

But recently, the platinum supply has been dropping.

The country holds nearly 90% of the world’s platinum reserves. So what happens in South Africa affects the platinum price.

And on January 23, 2014, the country’s platinum mines closed when workers went on strike for higher wages.

The strike impacts 40% of the platinum supply to the global market. And it’s costing the industry 10,000 ounces in lost output a day. That’s $1 billion in lost revenue.

There was enough platinum supply to meet demand through the first half of the year, so the strike’s impact on platinum prices was limited.

But soon, dwindling supply – with steady demand – will lead to higher platinum prices. 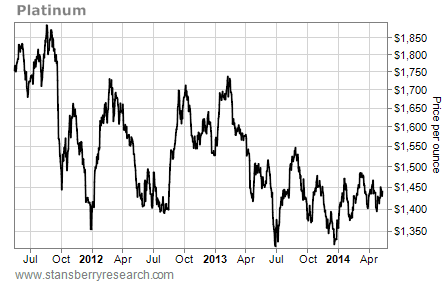 And metal-markets research firm Thomson Reuters GFMS believes the strike will drive the price higher. It expects platinum prices may go as high as $1,700 per ounce in the second half of the year.

Even if the strike ends, there will be further production losses from re-training and ramp-ups – helping push the price higher.

And an industry insider from South Africa I spoke with last week thinks some mines might not go back into production. These are old, deep mines that require constant upkeep. When the miners left, the rocks began to settle. Conditions that were unstable are now completely unsafe. He believes that at least two of South Africa’s platinum mines might have to be abandoned.

This news will shake the industry and likely send platinum prices to a new high later this year.

Investors looking to take advantage of higher platinum prices could buy now. However, we’ll get a much better opportunity over the next couple of weeks.

You see, South Africa just held general elections. The ruling party, the African National Congress (ANC), was re-elected with 62% of the vote.

The ANC recently expressed its concern about the platinum miners’ strike. Now that it has been re-elected, it will likely intervene to settle the strike and get the mines running again.

When this happens, platinum prices are likely to fall as investors’ concerns about supply are eased in the short term. My South African industry insider told me he expects platinum prices to conservatively fall $50 to $100 once the strike ends. That’s 7% lower than the price today – and the lowest price so far this year.

But as I’ve explained above, the pullback won’t last for long. And then prices will soar. I recommend waiting to buy until the platinum price hits $1,400 per ounce – that’s when we’ll have the most upside.

There are several “one-click” ways to trade this opportunity. The Sprott Physical Platinum and Palladium Trust (SPPP), the iPath Dow Jones-UBS Platinum Fund (PGM), and the UBS E-Tracs Long Platinum Fund (PTM) will all respond to the price movements of platinum.