But there’s one word that often comes right before investment gains, which I’ll tell you about in a moment. But first, let’s talk about Twitter…

Since the start of the year, Twitter shares are down 50%.

Twitter and a whole slew of technology stocks have high valuations even though they sell nothing but ways to waste time for people with nothing better to do.

Why would I care when a Hollywood celebrity goes out to eat dinner?

Do I need a sports star to remind me to “pray” for the victims of some televised disaster?

And now they are paying for it.

These tech companies aren’t exciting to most investors… In fact, many would even call them “boring.”

As regular readers know, I like to call these types of stocks “Digital Utilities.” And although they may seem like “boring” businesses, the mountains of cash they produce and return to shareholders are anything but…

Rather than touting some hot new device or social-media service that wastes everyone’s time, these companies provide technology services that are ubiquitous and a part of our daily lives.

For example, whenever you use your PC, you’re certain to be using Microsoft’s operating system. Whenever you connect to the Internet, the traffic is passing through Cisco servers. Whenever your smartphone makes a call, it’s using a Qualcomm chip.

And separating these real businesses from the risky ones is simple. All you have to do is look for a few simple signs that show which tech stocks will deliver safe profits.

One of the most obvious ways to separate the risky stocks from high-quality Digital Utilities is their price multiples. Stick with companies that trade at low metrics, like price to earnings, book value, or sales.

To show you what I mean, we’ll look at price-to-earnings (P/E) ratios. But you can use almost any traditional measure such as price-to-sales or price-to-book ratios and see roughly the same thing. Look at how wildly overvalued Amazon (AMZN) and Facebook (FB) are compared with other big tech firms… 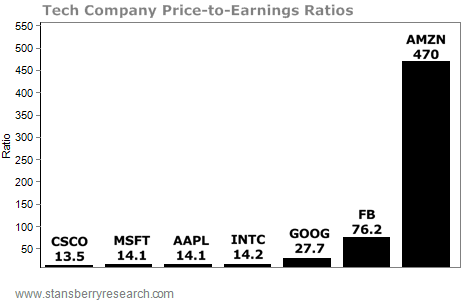 So while blue-chip tech firms Apple (AAPL), Cisco, Intel, and Microsoft all trade for 13-14 times earnings… Amazon trades for an indefensible 470 times earnings. Twitter has no earnings, so its ratio is infinite. Its P/E is literally incalculable.

Now, some people may be tempted by these high-flying tech stocks. After all, some of them could be the “next big thing” and grow many times over – making a fortune for you if you get it right.

That may be true… but as we’ve seen over the past few months, you can earn even better returns by sticking to the old, “boring” cash producers.

Although these companies may not be very exciting to most investors, the consistent returns they generate will protect you from the wild swings we’ve seen recently in stocks like Twitter… and help you sleep better at night.

To our health, wealth, and a great retirement,