Don’t fall for the hype…

Right now, financial headlines are stoking fears of a collapse in income investing and a fall in the stock market.

Folks argue that 1) interest rates must rise and 2) rising interest rates destroy wealth for those who hold income-paying investments. They look back to the early 1980s, when the Fed hiked up interest rates, causing a massive recession.

[ad#Google Adsense 336×280-IA]It’s true that bond prices move in the opposite direction of interest rates, and that a sharp increase in rates would drive down the market price of bonds.

But while this opinion is understandable, it’s a simplistic view of a dynamic economy…

I know interest rates aren’t the most exciting topic to most readers.

But understanding what it means for the market can put you ahead of 99% of the crowd.

When a company wants to grow, it can either make more money and reinvest it, or raise capital. Lower interest rates make borrowing cheaper. That’s why the government holds rates low.

So the common wisdom states that higher interest rates make it more expensive for companies to borrow funds. Without that cheap cash, they can’t expand as easily or as quickly. That stalls the economy, and stocks suffer. 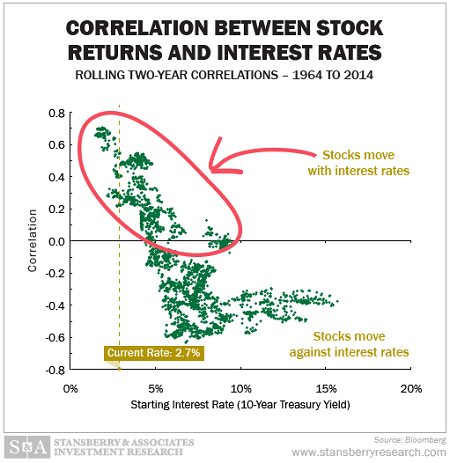 The trend is clear. When rates rise from low levels, stocks tend to rise during that period. It makes perfect sense. Plus, think about the two factors that tend to push the Federal Reserve to raise rates…

The economy is doing too well. People are buying lots of “stuff,” companies are expanding and consuming more fuel, and asset prices start to rise significantly. The Fed decides it needs to raise rates to slow things down, and stocks fall.

The Fed decides that the economy isn’t struggling anymore. While rising rates don’t help stocks, an improving economy is more than enough to offset increasing rates. Stocks keep rising no matter what the Fed does.

Missing that key part of the diagnosis would put you on the wrong side of the market move. And that assumes rates rise at all. To say that rates need to rise isn’t true, either.

The argument goes like this… First, the Fed will see an improving economy and a rising risk of inflation, so it will taper its quantitative easing and raise the federal-funds rate. Once that happens, other interest rates could rise and the price of fixed-income investments (like bonds) would fall. Remember… rates and prices always move in opposite directions.

But the Fed has demonstrated that it doesn’t need to raise interest rates. Rates can stay as low as the Fed wants for as long as the Fed wants. For instance, the rates on 90-day Treasury bills stayed below 1% for 14 years between 1934 and 1947. There’s no law of finance that says interest rates have to move higher.

Today, the Fed won’t make any big moves because it’s unlikely to see lower unemployment or a risk of inflation.

The unemployment rate has dropped all the way from 9.9% to 6.7%. Don’t expect it to drop any more for the time being. That’s because the U.S. labor-force participation rate – the percentage of working adults – has been improving. This is good for the economy. It means long-term unemployed folks are getting out and looking for jobs. But statistically, these new job-seekers will keep the unemployment number from declining further.

As far as inflation goes… it simply isn’t happening, either.

As you can see, there are a lot of dynamic factors at work here. That’s why trying to predict interest rates is a fool’s game… The best bet is to build a diversified portfolio that’s prepared for any interest-rate environment.

In tomorrow’s issue, I’ll share a little-known way to earn safe, steady income streams – regardless of what happens with interest rates. It’s something you’ve likely never heard about… or considered.

Here’s to our health, wealth and a great retirement,