If you’re betting on higher natural gas prices, you could be in for a shock.

Cold temperatures across the U.S. caused natural gas prices to jump this year. Prices have so far held above $4 per thousand cubic feet (MCF) in 2014. The price spiked as high as $8 per MCF in February.

But the natural gas stock rally is ending…

New technologies have allowed oil and gas companies to tap into massive amounts of natural gas.

That’s a 28% increase in seven years.

It’s even more amazing when you consider that production was flat over the prior 12 years. 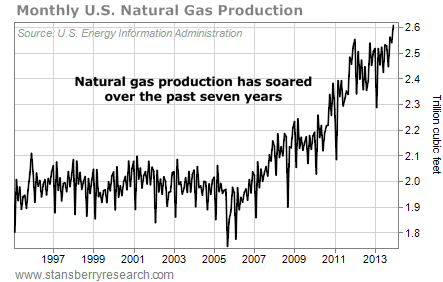 With sky-high prices in 2005, natural gas was the priority for oil and gas companies. Even after production increased, prices still remained above $6 per MCF for the next four years. Over 80% of the drilling rigs operating in the U.S. drilled for natural gas during that time. Shale plays like the Haynesville in Oklahoma and the Barnett in Texas took off.

But as production continued to increase, the trend switched. Falling gas prices began to push operators out because they couldn’t make money. The share prices of natural gas producers plunged. By July 2011, there were more rigs looking for oil than natural gas.

Fast-forward to today. Nearly the entire drilling rig fleet is looking for oil. But we still have an abundance of natural gas. Production continues to climb each year. And the overabundance of supply has kept prices low.

However, the severe winter across much of the U.S. has pushed demand for natural gas higher than expected this year. We’ve used so much natural gas that the volume in storage is at its lowest amount in a decade. This drove prices back up.

It’s expected that higher prices will help increase the earnings of natural gas companies this year. On this expectation, investors have already sent these stocks soaring.

You may not have noticed the drop in the price, especially if temperatures are still below freezing where you live. But after spiking in February, natural gas prices are back down to around $4.40 per MCF.

The EIA predicts the average price of natural gas this year will be $4.58 per MCF. That’s up 19% from last year and a whopping 61% from 2012. However, the price will fall back to $4.26 per MCF in 2015. I see this trend continuing as production keeps increasing.