After suffering a brutal past few months, the offshore-drilling sector looks set to rally…

For much of the past three years, the price of crude oil has stayed stubbornly above $95 per barrel. It’s amazing when you consider that in 2004, oil was just $40 a barrel.

These persistently high prices have produced terrific business conditions for companies that supply drilling equipment and services to large oil firms. According to Barclays research, global oil and gas exploration spending has increased by $291 billion (nearly doubling) in the past five years.

[ad#Google Adsense 336×280-IA]However, over the past few months, some of the world’s premier offshore-drilling companies have gotten hammered.

Shares of Transocean (RIG), the leading deepwater-drilling company, have fallen around 20%.

The other giant deep-water specialist, Diamond Offshore (DO), is down over 30%.

Investors fear there is an oversupply of drilling ships on the market today.

Rig-utilization rates (which measure the amount of rigs a company is using out of its entire fleet) have dropped in places like the Gulf of Mexico and the Persian Gulf over the past year as new rigs have come online and existing rigs have rolled off contracts.

But it’s likely this correction will be followed by a solid rally. Here’s why…

The market often punishes oil-and-gas services companies when utilization rates fall… and pumps them back up when utilization rates recover. Rates fall as companies evaluate their budgets and adjust their production accordingly. Rates could drop a bit more in the near term, but oil and gas investment continues to grow. And new areas, like Mexico, are entering the market. Utilization will catch up.

We can follow utilization-rate cycles using the price-to-book (P/B) ratios of these companies. The P/B ratio tracks the relationship between a company’s market price and its book value. It’s a valuable tool for oil-and-gas services companies because the market price alone often doesn’t take into account equipment the company is not currently using.

That’s why we see these giant companies trade for less than it would cost to replace their equipment. And it’s why premium offshore-drilling companies are such a great value today.

The chart below shows the average P/B ratio of these five companies over the last five years. As you can see, they trade in waves… And right now, we’re close to the trough. The only time these companies had a lower P/B ratio was during the financial crisis. Not even the giant Macondo well disaster in the Gulf of Mexico (the Deepwater Horizon oil spill) in April 2010 drove these companies to a lower value. 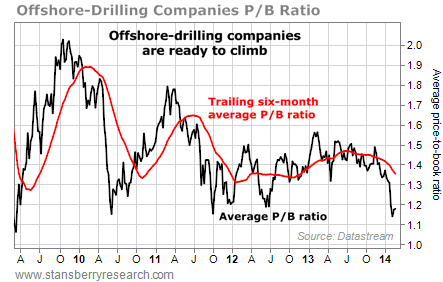 Investors who bought the major players in offshore drilling at this value in 2010 made 60% on the recovery. That’s likely to happen again.

The table below shows the huge value in the five major players in offshore drilling right now.

As we said earlier, the price of crude oil is still near multiyear highs. It recently closed at $102 per barrel. And large oil companies are continuing to spend money on drilling.

Transocean, for example, has a $28 billion backlog (orders yet to be completed). Based on the company’s expected 2013 sales of $9.5 billion, it already has three years of contracted sales in the bag. Yet shares are trading at the same P/B ratio they were after the largest oil spill in history.

If oil stays around its current level of $100 a barrel, major oil companies will continue spending huge amounts on exploration. This will keep the order books full for most of these offshore drillers. And all the bad news is priced into these stocks by now. That means at least a short-term rally is in the cards.