The greatest growth story in oil today is making many investors tremendous profits.

Longtime readers know about the Eagle Ford… It’s a layer of rock in Southeast Texas that’s rich in oil and gas.

Oil and gas companies like Penn Virginia (PVA) have been able to increase their profits by buying high-quality acreage in the region. Penn Virginia expects its oil production to grow 65% to 85% this year. As a result, its share price has skyrocketed. It’s up 237% in less than a year.

[ad#Google Adsense 336×280-IA]And while it’s not too late to profit from companies like Penn Virginia, there are some I urge you to avoid.

While many of the companies in the Eagle Ford are making big returns, the hype has caused some companies to go too far to get involved.

Baytex Energy is a Canadian energy company that produces heavy oil in Alberta and British Columbia.

The problem with heavy crude oil is that it sells for less than light crude oil (the “good stuff”). For the first nine months of 2013, Baytex’s average oil price (for its crude sales) was 36% below the West Texas Intermediate benchmark.

As you can see in the chart below, this had an impact on the company’s share price. In June, Baytex closed at its lowest price since 2010. 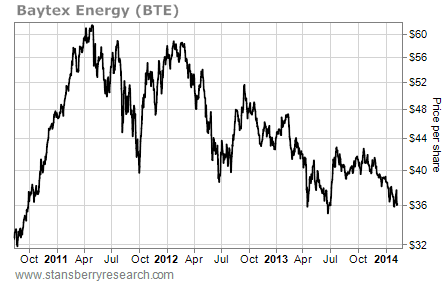 In an effort to improve business, the company has decided to buy into the Eagle Ford. Earlier this week, Baytex announced it will buy shale oil producer Aurora Oil & Gas for $2.35 billion (which includes taking on Aurora’s debt of $670 million). Aurora owns 22,100 net acres in the Eagle Ford. After accounting for oil production, the deal works out to about $50,000 per acre.

As you can see, Baytex paid a 40% premium over the most expensive deal on this list. That’s way too expensive for what the company got.

Oil production in the Eagle Ford is low-risk and repeatable, but this deal will not produce high returns.

The most optimistic assumption is that these acres hold about 128 million barrels of oil equivalent. The acquisition cost works out to nearly $20 per barrel. Aurora’s profit on its Eagle Ford oil production was $35.80 per barrel for the first three quarters last year. So Baytex will be lucky to clear $16 per barrel on its new acquisition.

Another way to look at it is Aurora’s oil wells could produce, at best, 6 million barrels this year. At $35.80 in earnings per barrel, Baytex will need 11 years to recover its investment. That’s troubling, considering that a shale oil well’s productive life probably isn’t that long. In short, it looks like there’s more trouble ahead for Baytex.

While the Eagle Ford is one of the best oil plays in the world today, investors need to be wary of companies that are overpaying for acreage. Instead, focus on companies that are growing organically in the region – like Carrizo Oil & Gas (CRZO) and Sanchez Energy (SN).

Like Penn Virginia, Carrizo and Sanchez hold significant acreage in the Eagle Ford. And both are focusing the bulk of their growth efforts on the area. For example, Carrizo began acquiring acreage in 2010. It has increased companywide daily oil production by 367% annually since then.

More importantly, Carrizo and Sanchez are trading at lower valuations than their peers. That means they are potential buyout candidates like Aurora Oil & Gas. Even if the companies don’t get bought out, their growth should push shares higher.