I know that sentence sounds crazy. But it’s actually true.

Let me explain what I mean…

I don’t invest the way most people do. Instead, I keep my cool – NOT getting heavily invested – until once-in-a-lifetime opportunities come along. Then I step up big.

I think traditional advice of 60% stocks/40% bonds is almost never the right mix to have.

For example, having most of your money in stocks in 1999 would have been a terrible idea… Stocks were expensive back then.

And if you’d blindly followed the traditional wisdom, you would have lost money in stocks over the next decade.

But buying stocks in 2009 was a once-in-a-lifetime opportunity.

In late 2008 – for the first and only time in my life – I borrowed money to buy stocks. (I took out a home equity line – no joke!) It was a once-in-a-lifetime opportunity. And it worked out fantastically.

By 2011, a once-in-a-lifetime opportunity showed up in real estate…

I recognized the opportunity (as you know, if you’re a longtime reader of DailyWealth). For the first time in my career, I started buying local real estate in Florida as an investment.

I’ve managed to buy up incredible “trophy” properties, often at 80%-plus discounts to their values at the peak of the market. I haven’t sold anything yet, so I can’t say how well I did. But I think I’m in pretty darn good shape.

The thing is, real estate has recovered. While I believe real estate is still a good value, the once-in-a-lifetime moment has passed.

So what’s the next once-in-a-lifetime opportunity? I believe it will be emerging-market stocks.

Investors are fleeing emerging markets at a faster rate than I can remember. We’ve seen a record 15 straight weeks of OUTFLOWS from emerging markets. That beats the previous record of outflows set in 2002. 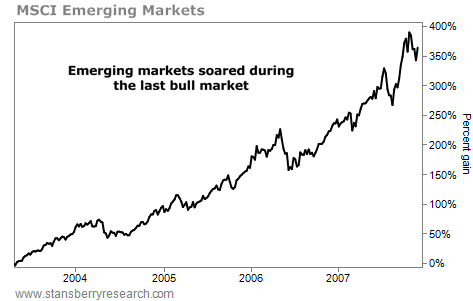 Emerging markets have started out this year terribly. And they are still in the news (which is a bad thing… the start of a new bull market in something typically happens after it’s gone from the headlines).

So it might not be THE day for emerging markets – yet.

To be honest, I have been too early on this idea so far. Some emerging-market countries in particular are just too darn cheap to ignore.

All I can tell you is that, with my own money, I am looking for big, once-in-a-lifetime opportunities.

Personally, I succeeded by buying stocks starting in 2008. I’ve done well in real estate by starting to buy in Florida in 2011. And for 2014/2015, I may start to allocate less money toward Florida real estate and more money toward emerging markets.

I do believe that, every few years, there’s a new “once in a lifetime” investment opportunity available somewhere on the globe.

I suggest you do the same.