$10,000 “invested” in Bitcoins a year ago would be worth roughly half-a-million dollars today…

This “digital currency” is up around 5,000% in the past year… and that includes a (roughly) 30% fall over the last few months.

With gains like that, Bitcoin is the “in” thing to talk about at cocktail parties today.

It’s fun to talk about.

[ad#Google Adsense 336×280-IA]Like most people, I really want some sort of decent alternative to the U.S. dollar or other government currency.

And Bitcoin is an interesting case study in this.

Let’s briefly take a look at Bitcoin as 1) a currency, and 2) as an investment…

A sound currency needs two very basic things… It must be readily accepted by others and relatively stable in value.

While it’s becoming easier to spend your Bitcoins, it’s still much more difficult to complete a transaction with Bitcoins than it is with dollars, for example. At this point, Bitcoin is more a novelty than a currency.

Secondly, Bitcoin is anything but stable in price. It has risen or fallen by 5%-plus 116 times in the last year… The U.S. dollar hasn’t done that once.

So how does Bitcoin look as an investment?

Longtime readers know I look for three things in an investment… I want to buy what’s 1) cheap, 2) hated, and 3) in an uptrend.

Bitcoin fails on all three metrics…

And even my “uptrend” criteria isn’t met anymore with Bitcoin…

It peaked in December and is down by around $300 since then. 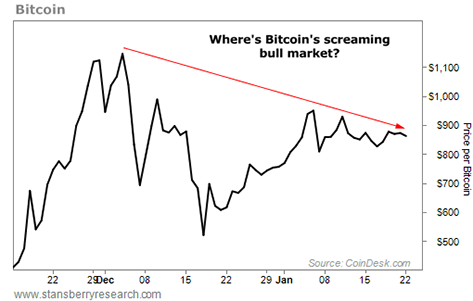 As you can see, Bitcoin has been incredibly volatile over the past few months. And it has been going DOWN in price. That’s not to say we can’t see higher prices… But the momentum that propelled Bitcoin above $1,100 is gone.

So Bitcoin isn’t cheap… it isn’t hated… and it isn’t in a strong uptrend. Also importantly, it doesn’t fit the bill of a true currency – not yet, and maybe never.

It doesn’t meet the basic criteria for a currency or for an investment.

There are so many better things you can do with your money right now.

For me, I will be a spectator in Bitcoin, not a participant. In this case, I would rather watch this circus act for the entertainment value than be a part of it.

You can do what you think is right, of course. But if you’re a buyer of Bitcoin, keep today’s words in mind…