If Mexico was to witness an energy rebirth like the United States, it would be because of one resource: oil.

But thanks to massive corruption, a lack of foresight and inadequate spending on technology and repairs, Mexican oil fields are underproducing.

Current production numbers show a decline from around 3.5 million barrels per day (bpd) in 2005 to less than 3 million bpd in 2013 (see the chart below). And the Mexican government refuses to provide resources for drilling and production improvements, further fueling the decline. 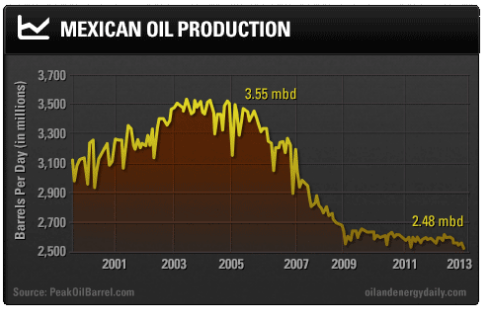 Now, though, everything is about to change. It may have taken decades, but it appears Mexico has finally learned its lesson.

You see, Mexican oil – like that of many other oil rich countries – is controlled by a government-run company. And for more than 70 years, Petroleos Mexicanos (Pemex) was the only company allowed to drill in Mexico.

And that means there will soon be an oil bonanza south of the border.

In fact, by 2025, production could conceivably double… and that isn’t a typo.

The biggest beneficiaries of a production increase in Mexico will be “big oil” – and the two companies at the forefront are Exxon Mobil (XOM) and Royal Dutch Shell (RDS.A).

The Mexican government is courting these companies because they have cash, and lots of it.

Pemex is currently spending around $12 billion a year in development, but that number needs to more than double for production to reach projected levels. Basically, Mexico believes that it needs outside help to take full advantage of its energy resources.

Should Mexico Open Its Borders?

However, this isn’t a risk-free play.

Prior to expropriation in 1935, the only oil companies that were drilling and producing in Mexico were foreign ones. But in 1935, the Mexican government took over all oil operations, hoping to protect the country’s resources from foreign exploitation.

The result was a boom, but it’s been followed by a decade-long decline.

Now, Mexico is on a path of forced depletion, meaning the easy money has already been made using antiquated equipment. To move forward, the country has no choice but to invite foreign companies to help.

That spells a mini boom for the oil majors as well as equipment suppliers and drillers like Halliburton (HAL) and Schlumberger (SLB). With their money, Mexican oil and gas production can finally realize its potential.

And “the chase” continues,