We all have our reasons for following Apple. I track it because this tech behemoth is a massive global consumer of metals – base, rare earth, and precious.

And right now, Apple is giving us some surprising indications that the demand for silver is much higher than its current price would have us believe.

Actually, the first “sign” came to us back in January when Apple had to delay new 27-inch iMac deliveries by up to four weeks.

[ad#Google Adsense 336×280-IA]Of course, the company never specified exactly what was causing the delay… but the rumors flew.

The most intriguing rumors centered on a possible shortage of industrial silver in China.

Regardless, the Apple “indicator” is just one reason silver could double over the next 12 months.

We all know about the drubbing that silver took in mid-April. While silver dropped from $32 in February to $18.50 by mid-June, something amazing happened.

Buyers stepped up, and supply became so scarce that premiums nearly quintupled from 8% to 37% above spot prices.

And that’s if you could even get your hands on it.

Essentially, almost no one was selling. Yet a lot of buyers recognized that silver was “on sale” and decided to stock up.

But no one saw this next one coming…

In the first three months of 2013, the U.S. Mint sold more than 15 million American Silver Eagle bullion coins. That’s the first time ever the Mint has sold this many coins so early in the year, setting a record in the 27-year history of the series.

Then in early November, the U.S. Mint reported that its year-to-date silver coin sales had reached a new record. The mint had sold 40.175 million ounces, surpassing the previous annual record set in 2011 with sales of 39.87 million ounces.

Demand has been healthy right through the year, with January boasting 7.5 million ounces, 3 million in October, and 1 million in November.

And there’s still the month of December to count, but the last allocation for buyers was December 9th. New orders can only be placed as of mid-January. 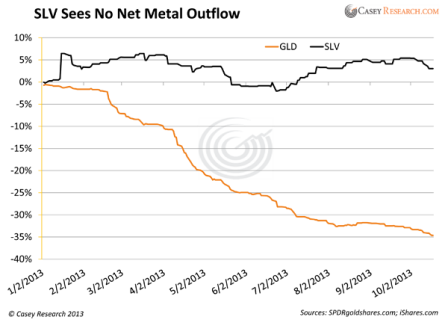 But coin buyers aren’t the only ones who are stocking up.

Silver ETF holdings have not just held up, they’ve grown this year, according to Bloomberg.

When all silver ETFs are counted, holdings are up 4% year to date and up 6% in the last 12 months.

That’s a sharp contrast to gold holdings in physically backed ETFs; 2013 has seen their holdings fall by 30% so far.

What could explain this? In a word: ownership.

About 40% of GLD is held by institutional investors. On the other hand, only about 14% of SLV is in the hands of institutions.

Individual investors have stayed invested, despite significant price weakness. Clearly, they don’t think the silver bull market is over. 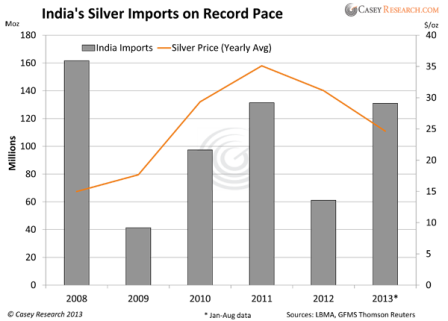 It’s now clear that, in the first half of 2013 alone, India imported a massive 130 million ounces of silver.

According to Thomson Reuters GFMS the trend is ongoing, with Indian imports on pace to set a record high this year.

India has become such a substantial buyer that it now absorbs nearly 45% of mined silver available for investment purposes annually.

The next indicator is even more incredible…

Silver Is Now Priced Below Cost

This one is mind-blowing.

Thanks to hefty cost-cutting measures, major silver producers have been able to lower their all-in cash costs by 13%, to $20.08 per ounce.

Yet the current price for silver is around $19.50 per ounce.

Did you get that?

It costs more to produce silver than what it’s selling for!

Miners won’t carry on like this for long. Some have already put the brakes on planned production increases.

Can the silver price continue to languish in the face of such strong physical demand?

Keep in mind, investors have been buying silver even as the price has fallen.

That would seem counter-intuitive. But as we say in investment parlance, it’s contrarian.

People are buying because they fully expect silver prices to head upwards, and they recognize silver as being “on sale.”

The existing discrepancy between demand, supply, and the current price is not sustainable.

Common sense tells us silver prices have a lot higher to go.