One precious metal has actually risen in price this year.

This metal is UP. Just a little… 2%. But given what the rest of the metals are doing, it’s impressive. And I think it has plenty of room to run a lot higher.

I’m talking about palladium. The chart below shows the past two years of price action in gold and palladium. While gold fell off a cliff… palladium continued a slow march higher. 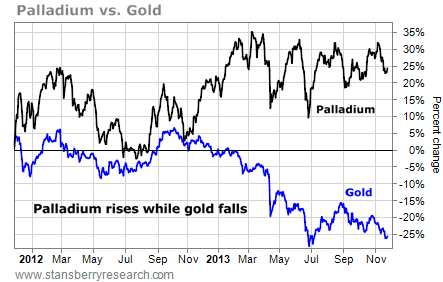 Palladium is closely related to platinum. Automakers use both metals to manufacture catalytic converters, which scrub pollutants out of car exhaust. More than half of the world’s palladium ends up in cars. And car production is on the rise…

China and the U.S. are the world’s two largest auto markets.

They account for nearly 40% of the passenger car market.

And analysts expect automakers to sell the most cars in the U.S. since 2007.

Investment bank Morgan Stanley estimates that nearly 7.2 million ounces of palladium will go into cars next year. That’s more palladium than the world will produce…

Analysts expect supply to drop to 6.4 million ounces this year. The big problem is South Africa…

South Africa is the second-largest producer of palladium, behind Russia. It saw its production fall 300,000 ounces from 2011 to 2012.

The country’s platinum and palladium mines are old, deep, and expensive. At today’s prices, the mines barely break even. Yet the mining unions are all demanding higher wages. And the South African government is siding with the unions.

The government will force these mines to operate… but they will produce less and less palladium.

Russia is the world’s largest palladium producer. In the past, it produced so much of the metal that it had excess inventory. Over the past several years, sales from Russia’s stockpile of palladium supplied excess demand. But that excess palladium is nearly gone now. Palladium sales from this source will fall to about 100,000 ounces this year, from as high as one million in 2010.

In short, demand is high and rising. Supply is small and falling. That’s a recipe for higher prices.

Per financial data service Capital IQ, there are only four primary palladium producers with more than $10 million in sales trading on major U.S. and Canadian exchanges.

Stillwater Mining is the largest. It has some debt, but sufficient cash and positive EBITDA (earnings before interest, taxes, depreciation, and amortization) to service it. However, Stillwater’s EBITDA peaked in 2011, and its profitability has dropped since then.

The safer bet here is probably the Sprott Physical Platinum and Palladium Trust (SPPP). This fund is 54% palladium and 46% platinum. While platinum prices are down on the year, they’re holding up much better than gold and silver. And platinum is running into many of the same supply/demand issues as palladium.

SPPP is currently trading at a 4.4% discount to its net asset value. (That’s a good deal, considering you’d have to pay a premium to buy the physical metals.)

The big picture is bullish for palladium… That has helped boost prices while other precious metals have fallen. As long as the high-demand, low-supply situation is in place, I expect prices to continue to climb.