Note from Daily Trade Alert: Welcome to “Part 2” of Lesson 10 of our exclusive series on Dividend Growth Investing (DGI). As many people already know, DGI is an exciting investment strategy designed to help anyone generate safe, steadily-growing income over the long-haul. To guide us through this special series, we’ve commissioned the expertise of Dave Van Knapp.  For today’s lesson, however — which is “Part 2” of a special series on dividend reinvestment ideas — you’ll hear from dividend guru and creator of the wildly popular Dividend Champions, Contenders and Challengers list, David Fish…

In this second part of Lesson 10, I will focus on automatic reinvestment (in contrast to selective reinvestment, which David Van Knapp discussed in depth in Part One). First, however, I’ll start with a reminder of his opening remarks, which set the stage for choosing a method of reinvestment.

Introduction
As a dividend growth investor, you receive quarterly dividends from each company and, ideally, each company increases its dividend at least once per year. That’s the essence of dividend growth investing, or DGI, which aims for a portfolio that sends you a cash stream that rises every year. If you are retired, you can take that rising cash stream as income and use it to pay your everyday expenses or splurge on vacations.

But younger investors may not need (or want to receive) the cash right now, since they are working and their salaries cover expenses.

Even retirees may not need all the dividend cash, thanks to Social Security (and maybe a pension).

So what many dividend growth investors do is reinvest the dividends.

This creates a wonderful cycle of compounding.

When you reinvest the dividends to purchase more shares, those new shares earn even more dividends.

Combined with the companies’ annual dividend increases, you have a cash-generating machine! 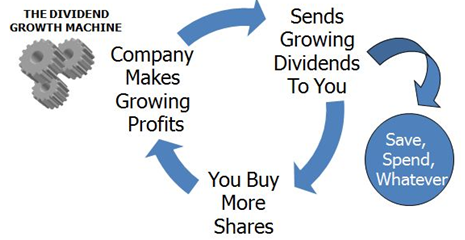 The Basics of Automatic Reinvestment

Although the concept is simple enough, there is some confusion about the practice of using “DRIPs” (or Dividend Reinvestment Plans) to turn cash dividends into additional shares. There are two basic types of DRIP and a brief history lesson might help to clarify the difference between the two.

If you look back 20 years or more, the acronym “DRIP” primarily referred to company-sponsored Dividend Reinvestment (and Stock Purchase) Plans, which were offered directly to companies’ shareholders – usually at no charge – and administered either by the company itself or by its Registrar and Transfer Agent. An investor had to have shares registered in his or her own name, rather than in “street name,” which describes stock ownership within a brokerage account.

One side effect of the growing popularity of DRIPs was that many individuals owned several companies (and reinvested their dividends) without ever having to open a brokerage account! What’s more, company-sponsored plans allowed participants to make additional – optional, not required – cash purchases, a benefit that exists to this day. So, for example, a small investor could invest (via check and later, electronically) $10, $25, or $50 in companies like 3M Company (MMM), Johnson & Johnson (JNJ), and AFLAC (AFL).

Beginning in the mid-1990s, the major brokerages launched an effort to rein in as much of those assets as possible. The primary “pitch” was that investors could reinvest their dividends – usually for free – in their brokerage accounts, so dealing with all that paperwork was unnecessary. Some brokers only purchased whole shares, so reinvestment wasn’t always fully implemented, and the brokerage “DRIPs” do not offer a cash purchase feature. If the investor wants to buy more shares of a company, normal commissions are charged.

The brokerage “DRIPs” met with limited success at first, but were aided by another trend that started in the mid-1990s, which can be described as the standardization of company-sponsored DRIPs. In the midst of ongoing consolidation among the Transfer Agents, those agents began to develop “cookie-cutter” plans that promoted standardized features, including fees for making additional cash purchases and, in some cases, for reinvesting dividends. Naturally, these added costs have led to a decline in the popularity of company-sponsored DRIPs, to the point where many people are unaware of their existence.

If you hear the phrase, “I DRIP my dividends,” and automatically think of what happens in a brokerage account, it’s a good indication that the brokers have been successful in co-opting the acronym “DRIP,” as they set out to do 20 years ago. Both types of (automatic) DRIP have their advantages and disadvantages. What’s important is that investors should be aware of both the benefits and the potential costs of each format…and how they can best utilize these plans.

The Benefits of Automatic Reinvestment

In the first part of this Lesson, Mr. Van Knapp explained in detail how Selective Reinvestment allowed him to buy at good valuations. He provided an excellent example of a stock that he had recently purchased, Philip Morris International (PM), and I’ll repeat his first chart below, which shows its price and dividend over the past 5 years. 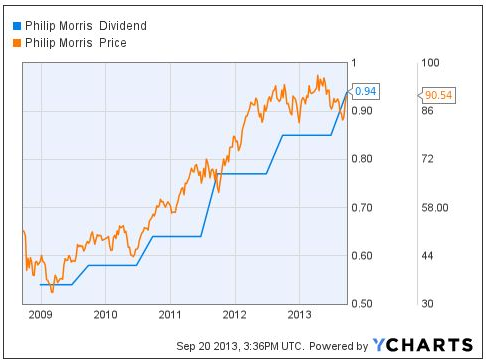 I’m sure that his purchase was a wise choice for the cash that he had available, as PM’s price (the orange line) rose steadily from mid-2010 to 2012, then sort of flat-lined since then. Its dividend has been increased in the third quarter of every year, including the most recent 11% boost.

I’m not about to argue that Automatic reinvestment would have been better than his Selective choice, but the same fine company can be used to illustrate the alternative. Notice how beneficial it would have been to reinvest PM’s dividend (the blue line) at prices rising from about $36 up to the current $90+, and many points between.

The choice between the two methods – Selective or Automatic reinvestment – may come down to an investor’s analysis of the underlying company. Indeed, a company like PM suggests that its steady growth in earnings – which translates to both rising dividends and rising stock prices, makes such a company a good choice for either (or both) methods.

The investor has to weigh the consistency of that growth and the compounding of constantly reinvested dividends against the possibility that the share price may become overvalued, which could diminish the effect of that compounding.

A second benefit of reinvesting automatically is the ability to grow a portfolio organically.

When dividends are reinvested automatically, the funds are routed back into purchasing more shares of the companies that issued the dividends. This can be a perfect way for a small investor, particularly one using a company-sponsored DRIP to make small additional cash purchases, to grow a portfolio in a persistent manner. Using these plans, it’s entirely possible to establish a widely diversified portfolio, since most require ownership of just one share (or a small initial purchase). Since 1986, The Moneypaper has been helping individuals enroll in any of over 1,000 company-sponsored DRIPs. (Disclosure: I work for The Moneypaper and have used it to enroll in dozens of DRIPs.)

The Care and Use of Automatic Reinvestment

As mentioned above, there can be some costs involved in the use of company-sponsored DRIPs, and the reinvesting offered by brokerages doesn’t offer a cash purchase feature (other than paying regular commissions for additional purchases). Roughly half of the company-sponsored DRIPs now charge fees; for a list of No-Fee DRIPs, click here.

So, just as you should take care not to let excessive trading lead to high commissions, you should also take care to manage any costs involved in company-sponsored plans.

The fees that some DRIPs charge suggest a more pragmatic approach, a sort of Hybrid Strategy. For example, I’ve accumulated nice stakes in company-sponsored DRIPs offered by firms that went on to adopt fees, so I have turned off the automatic reinvestment for dividends paid by AT&T Inc. (T), Coca-Cola (KO), and Kimberly-Clark (KMB), to name a few, instead opting for Direct Deposit to my bank account. If I owned these in a retirement account, I might choose to reinvest the dividends, provided that there’s no charge. Conversely, the dividends paid by companies like Hormel (HRL), Duke Energy (DUK), and Genuine Parts (GPC) earn me another few shares each quarter, since no fees are charged.

So the notion of a hybrid approach leads me back to Mr. Van Knapp’s closing remarks, which bear repeating…

Again, I will defer to Mr. Van Knapp’s illustration of his own Dividend Growth Portfolio, in which he has reinvested the dividends since the portfolio kicked off in 2008: 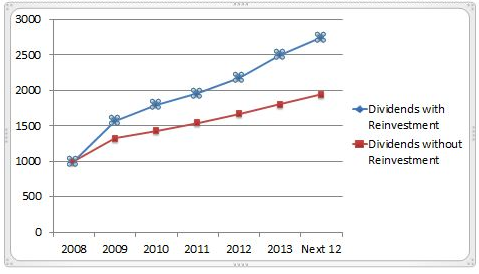 The red line shows dividends without reinvestment, reflecting an average 8% annual dividend increase for the portfolio. The blue line shows the actual dividend stream of his portfolio after it has been goosed by reinvesting all dividends. The blue line started to separate from the red line as soon as the first reinvestment was made (in 2009), and its lead widens as time goes on.

It occurs to me that his chart is typical for Dividend Growth Investors who reinvest their dividends and, as he concludes, “The gap will probably widen every year hereafter.” This is a portfolio that doesn’t receive any additional funding. Imagine how much more it could be “goosed” by adding outside cash over time…as a participant in company-sponsored Dividend Reinvestment (and Cash Purchase) Plans can do!

Reinvestment accelerates the growth rate of the cash stream from a dividend growth portfolio. There are two basic ways to reinvest dividends: Selectively and Automatically.

Either way, the compounding effect will significantly increase the incoming cash stream from a dividend growth portfolio. Even better, it’s not necessary to choose one method or the other; a Hybrid approach can achieve the best of both.

Disclosure: At the time of publication, author owned shares of all stocks mentioned in this article.