Imagine bringing all manufacturing home from China. And not just bring home as in here in the U.S. … literally home … as in your living room.

We’re living in an exciting time – at the threshold of a new revolution in technology that will radically change everything – just like the internet and the personal computer did in the previous 3 decades.

The 3D printers of the future will enable nearly anyone to print nearly anything. And this future may be right around the corner. Many experts believe this printing process is nearing the point where manufacturers will be obsolete.

[ad#Google Adsense 336×280-IA]Though 3D printing isn’t a new technology – it’s been around for 30 years – the process is faster, cheaper and more reliable than ever.

In fact, many business industries – including automotive, aerospace, consumer products and medicine – already use 3D printing technology to design prototypes.

Of course, the potential of this technology is much greater.

One day, even living tissue and organs could come from a 3D printer. So a doctor could print you a new liver during surgery.

There has been a lot of buzz about this industry recently … and for good reason. This is an amazing technology. And it promises to enrich our lives. While the basic uses of 3D printing are already here, these more complicated uses of 3D printing may be further down the road than many readers believe.

Though some day everything mentioned above will be possible, it may be another 20 years before it is commercially available. In fact, many experts project the 3D manufacturing market to be worth only $3.6 billion in 2016 and only $5.2 billion by 2020.

That might sound like a let-down, but it actually means that we’re not even close to seeing the biggest gains in this sector.

So the industry has a bright future, but the big profits may be decades away. Despite the likely waiting period, 3D technology stocks have made incredible rallies.

However, we believe valuations for both these companies are too rich. For example, in early 2013, 3D Systems recently reported a 46% growth in quarterly sales. This amazing level of growth managed to miss sales projections, sending the shares tumbling (blue line). It’s a major concern when revenue growing 46% disappoints the market. 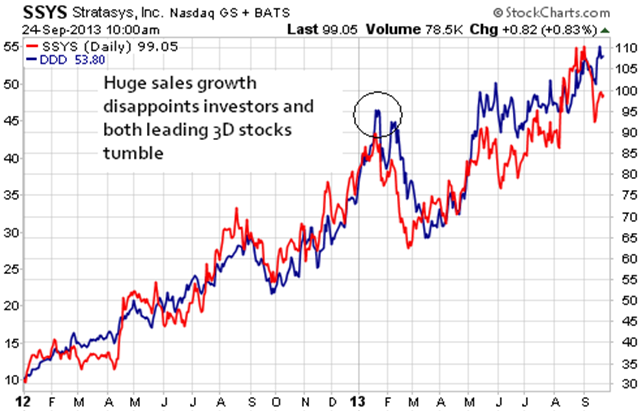 Investors were likely right to panic and sell positions. These stocks carried P/E ratios that were in nosebleed territory, and needed huge growth to justify those valuations – and both stocks are now significantly ABOVE their previous early 2013 highs.

I believe we’re still in a huge growth trend for 3D – but we have to be reasonable when it comes to valuation and not overpay just because the market falls in love with a handful of the more obvious plays in the sector.

Where’s the real growth to be found?

Governments, businesses, engineers and students have an enormous amount of devices they’d like to build. However, these projects can be costly, and staying within a budget is difficult. Moreover, computer software can only do so much. At some point, testing with a tangible good must be done.

Though 3D printers will be widely available at some point, we’re still in the earliest stages – again, that’s a good thing…

So these stocks were priced to perfection. And both P/E ratios would have a long way to fall were they to decline to levels from even a year ago. However, once the P/E ratios come back down to normal levels, we’ll be very interested in owning one of these companies. Stratasys is especially appealing because of its RedEye business, which provides prototyping services to customers.

But we believe these two 3D printing stocks are dangerous at current prices. Plus the competition is fierce … no fewer than 31 companies manufacture professional-level 3D printers. So not to be a party pooper, but many investors have been swept up by the stories of these two companies, thinking they are the only players in a large game. That’s untrue, and valuations are rich at today’s prices. And these stocks may not be quite the investment they’re billed to be.

However, there is another option for investors. And we think it’s a better option. At-home 3D printing technology is still developing, but the biggest growth sector right now is in business services. In fact, many businesses are ramping up many basic forms of 3D printing as I write this report. . 3D printing has proven to be an excellent and cheap way for manufacturers to design, test or replace parts at this stage.

We’ve seen this story before.

Investors frequently focus on consumer aspects of a sector, forgetting that most commerce is business to business. In fact, over half of American GDP is strictly B2B – so whenever you find a growth sector, you should focus most of your investment research on that segment, especially because most investors ignore it completely.

For example, most people have no idea that over 60% of Microsoft’s (MSFT) sales come from businesses. Investors focus on the idea of the PC being replaced by Apple (AAPL) and Google (GOOG) based tablets in the consumer sector, forgetting that almost zero businesses use Apple or Google software products, and the overwhelming majority use Microsoft’s business software.

And while I expect that we’ll continue to see substantial growth in consumer 3D printer unit sales, I also know the real power behind 3D printer growth is likely to be seen in the sales of 3D systems, prototypes and one-off prototypes to businesses.

That’s because manufacturer and fabrication businesses have extremely specific needs for highly automated, extremely defect-free products and processes. Creating these types of highly efficient and exacting manufacturing processes used to be extremely expensive and time-intensive.

But with 3D printing, there’s much less waste and much more control over those processes. You don’t need thousands of workers and millions of dollars of machinery to achieve near-perfect products and processes with extreme accuracy.

If you’re looking for 3D printer investments, focus on B2B. We’re still in the early stages of what I believe will be a huge growth sector for years to come.

Urgent Alert: The ONLY 3D Printer Stock You Need to Own [sponsored ad] This company’s stock has already soared 23% in the past few weeks — and the biggest gains are yet to come. Click here to read the full story.