Note from Daily Trade Alert: As our regular readers know, we’ve been covering more and more ideas in the dividend growth investing (DGI) space. In short, we believe there’s no better way to generate a lifetime of safe, steadily-rising dividends than to buy high quality dividend growth stocks at the “right” price and then simply hold them for the long-haul. To help us identify these opportunities, we’ve been closely following who we consider to be a “dream team” of dividend growth analysts and investors — names like Dan Ferris, Elliott Gue, Ian Wyatt, Dividend Mantra, Chuck Carnevale, David Van Knapp and David Fish. With this in mind, we’re pleased to introduce you to the latest member of the DGI dream team: a popular dividend growth investor and blogger who goes by the appropriate name of “Dividend Growth Investor.” Below, you’ll find his latest stock analysis on one of our favorite dividend growers. It’s our sincere hope that by regularly covering ideas like this our readers will come to appreciate the awesome power of dividend growth investing.

This dividend king has paid uninterrupted dividends on its common stock since 1893 and increased payments to common shareholders every for 51 consecutive years.

The company’s last dividend increase was in February 2013 when the Board of Directors approved an 9.80% increase to 28 cents/share. Coca-Cola’s largest competitors include PepsiCo (PEP), Dr. Pepper Snapple (DPS) and Monster Beverage (MNST).

Over the past decade this dividend growth stock has delivered an annualized total return of 8.60% to its shareholders. 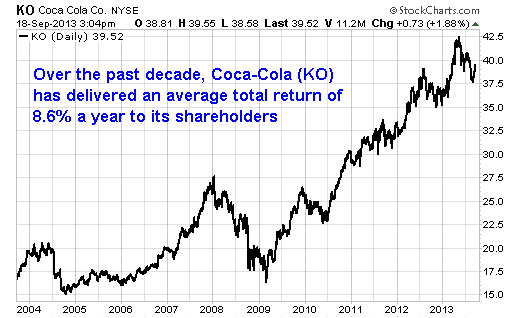 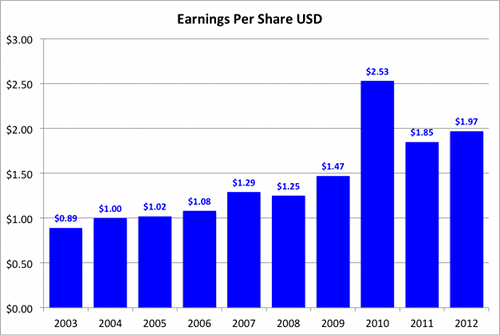 The company has managed to reduce the number of outstanding shares from 4.916 billion in 2003 to 4.527 billion in 2013. The spike in 2010 EPS was caused by a onetime accounting event related to recognize a gain on the 33% stake in Coca-Cola Enterprises that Coke already owned before acquiring the bottling giant.

Some of the company’s acquisitions over the past years have provided increased exposure to higher growth still beverages, which is where Coke lags behind PepsiCo.

The acquisition of CCE’s North American bottling business should bring in sufficient cost savings for the company’s North American supply chain, which would result in increase in cash flows.

In addition to that, it will bring more control over North American operations, deliver more flexibility in the company’s strategy implementation and reduce conflicts over the product mix with bottlers.

Coca-Cola usually purchases bottling operations in underperforming areas, when it believes it can improve operations. Given struggles in the European markets, I would not be surprised if the company attempts to buy those rights in a few years.

Some of the competitive advantages for Coca-Cola include leading brands with high levels of consumer acceptance, a worldwide network of bottlers and distributors of Company products and sophisticated marketing capabilities. The company continues to build a supply chain network that leverages the size and scale of the Coca-Cola system to gain a competitive advantage.

They work with their bottling partners to identify system requirements that enable quick achievement of scale and efficiencies. Coca-Cola tries to share best practices throughout the bottling system & address the ever changing consumer tastes. The company focuses on continuous improvement – innovations in packaging, new solutions to meet changing preferences in consumers.

The company’s return on equity has been on the decline over the past decade, falling from a high of 33.60 % in 2003 to a low of 27.40% in 2011. Rather than focus on absolute values for this indicator, I generally want to see at least a stable return on equity over time. 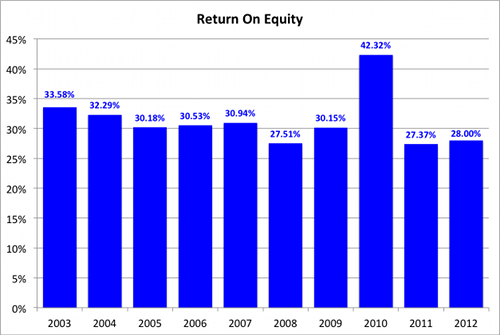 The annual dividend payment has increased by 9.80% per year over the past decade, which is slightly higher than to the growth in EPS. 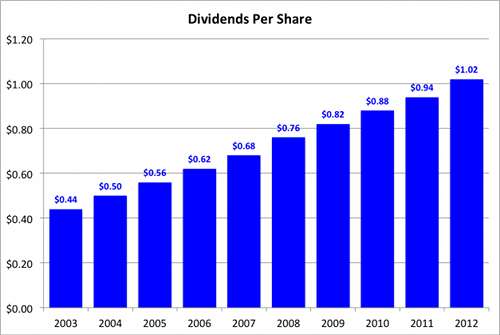 A 10% growth in distributions translates into the dividend payment doubling every seven years. If we look at historical data, going as far back as 1973 we see that Coca-Cola has managed to double its dividend almost every six and a half years on average.

The dividend payout ratio has remained at or above 50% over the past decade, ignoring last year’s spike caused by the onetime accounting gain referenced above. A lower payout is always a plus, since it leaves room for consistent dividend growth minimizing the impact of short-term fluctuations in earnings. 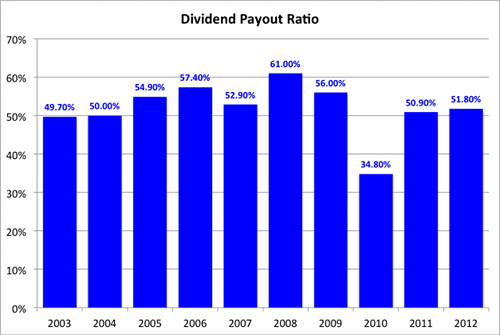 For enterprising income investors, selling a January 2015 put on Coca-Cola with a strike of $40, could result in an entry P/E of about 16, if exercised. If Coca-Cola stock trades above $40 at expiration date, the investor would get to keep the whole premium of approximately $4/contract. Otherwise, just wait and look for a correction below $40.