Dividend Growth Comes in All Sizes
There’s a widespread tendency among investors – and even among writers – to closely associate the idea of Dividend Growth with Large-Cap stocks, but that narrow thinking can blind us to the many opportunities among smaller companies.

Mid-Caps are usually defined as companies with market valuations of $2-10 billion and Large-Caps are companies worth more than $10 billion.

The very largest companies – worth $100 billion or more – are sometimes called Mega-Caps.

Micro-caps are defined as having market caps below $100 million.

One of the Dividend Challengers, with an 8-year streak of dividend increases, is Armanino Foods of Distinction (AMNF), not only a micro-cap (with a market value of just $46 million), but also a “penny stock,” with a price of just $1.45 per share. (The term “penny stock” originally meant shares trading below $1 in price, but now generally refers to any stock below $5 per share.)

The CCC listing doesn’t discriminate against thinly traded stocks or require membership in some proprietary index, so it’s good to see a commitment to a dividend “culture” even among micro-cap companies; there are currently 24 micro-caps among the 468 CCC companies. In its latest press release, Armanino, which trades in the Pink Sheets, announced an increase of 16.67% in its quarterly dividend, to 1.4¢ per share, and boasted that “This dividend will be the Company’s 52nd consecutive regular quarterly dividend.

In addition, the Company has had ten special dividends.” Douglas R. Nichols, Chairman of the board stated, “Our balance sheet continues to be strong and think we should reward our shareholders accordingly.” The only problem is that the price of AMNF has tripled in just over a year, so it may be overextended.

A more conservative micro-cap to consider would be PSB Holdings (PSBQ), which I expected to extend its streak of increases to nine years. But the parent of Peoples State Bank of Wausau, Wisconsin, which has a market value of just over $50 million, provided a positive surprise. The press release I found at the company website announced a 7.7% increase in the semi-annual dividend and stated that “The current dividend continues a 49-year tradition of cash dividends to PSB shareholders, including 20 consecutive years of increased cash dividends declared per share.”

So instead of being a Dividend Challenger, PSBQ enters its second decade as a Dividend Contender and stands just five years away from Champion status. The stock sports a current price/earnings ratio of just under 8 times its trailing twelve months’ earnings and yields 2.56%.

And the Newest Champion…
…is a Small-Cap (with a market value of $440 million). Computer Services Inc. (CSVI) announced on July 10 that its Board of Directors had approved a 14.3% increase in the quarterly dividend, from 14¢ to 16¢ per share, marking the 25th consecutive year of increases. (The Champions listing won’t include the company until the July 31 update.)

The company also increased its stock repurchase program by $5 million. Based in Paducah, Kentucky, CSVI “delivers core processing, managed services, mobile and Internet solutions, payments processing, print and electronic distribution, and regulatory compliance solutions to financial institutions and corporate customers across the nation,” according to its press release.

To put things in perspective, the company began its streak of dividend increases in 1989, the year that George H.W. Bush succeeded Ronald Reagan as President. Although the P/E of 17 might seem a tad high, the annual dividend payout of 64¢ represents a payout of just 36% of trailing twelve months’ earnings per share of $1.77. 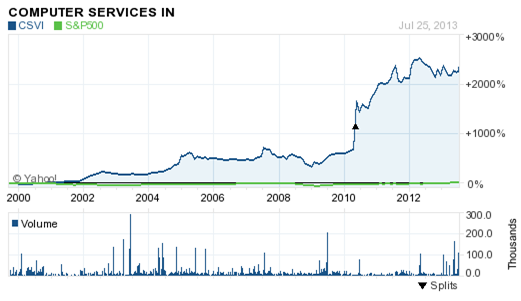 So although many of the most familiar Dividend Growth stocks – companies like Coca-Cola (KO) and Johnson & Johnson (JNJ) – may be large caps, it’s worth considering that 120 of the 468 CCC companies are Small-Caps and another 172 are Mid-Caps, while “only” 147 are Large-Caps. (Five stocks’ capitalization is unknown, but likely Small- or even Micro-cap in size.)