It has been a rough year for sugar, wheat, corn, soybeans, and just about every other agricultural commodity.

It’s down more than 20% from its peak last September.

But we’re now entering a seasonally strong period of the year for commodity prices.

Take a look at the following chart of DBA… 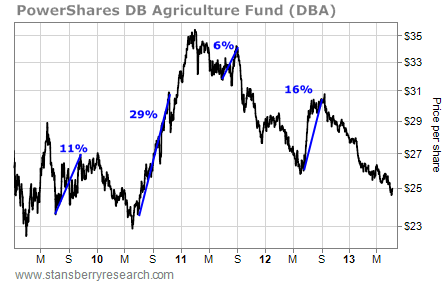 In each of the past four years, DBA rallied from July into October. The strongest rally (29%) was when DBA bounced off extreme oversold conditions in 2010. The weakest rally (6%) happened when DBA was consolidating at a high level in 2011.

The conditions today look more like those from 2010. So I expect the seasonal strength in DBA this year to be strong. Take a look at this shorter-term chart… 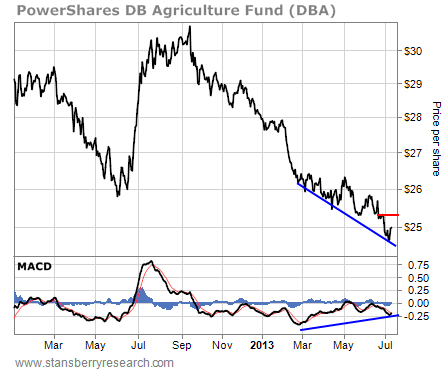 DBA is bouncing off its down-trending support line. And there’s strong positive divergence on the MACD momentum indicator. So the chart is set up for a strong reversal higher as we enter this seasonally bullish period for commodity prices.

If DBA can break above the red resistance line at $25.35, it should quickly challenge the May high above $26. Beyond that level, it would hit resistance near $28 – where DBA started the year. That’s a 12% gain from where DBA closed [Wednesday].

And compared to the rallies over the past four years, it’s a reasonable expectation for this summer.