Over the past few months, you’ve probably heard some very scary numbers about gold and gold stocks.

But the scariest number long-term gold-stock investors haven’t heard much about is “$5.5 billion.”

Remember… a “write-off” occurs when a company says an asset isn’t worth what it used to be (or what the company thought it used to be).

On June 28, giant miner Barrick Gold (ABX) announced that it would write down between $4.5 billion and $5.5 billion in its second quarter this year.

Due to falling gold prices, Barrick also announced layoffs. Then, soaring costs caused a production delay at its Pascua Lama project in Chile. And now, it has declared it will send another $5.5 billion to “money heaven.”

As I said last week, giant gold miner Newcrest had six operating mines, but only three of them are worth running at the current gold price. Barrick is in a similar boat with Pascua Lama.

Pascua Lama won’t start production for at least another year. I expect that to be pushed back further as the gold price continues to fall.

You see, planned production at this mine was between 800,000 and 850,000 ounces of gold for its first five years. However, the cost of the mine is now close to $8.5 billion. At that price tag and the current gold price, it would take about nine years just to pay for its construction.

From an accounting point of view, Pascua Lama is in deep trouble. And that’s a big part of Barrick’s write-off. The company had to account for the fact that Pascua Lama was supposed to be in production at half the current cost estimate.

Instead, it has a giant cash-sucking hole in the ground.

Not even Lehman Brothers’ accountants could say Pascua Lama is still worth the money. Investors did that math, too, as you can see from the chart below: 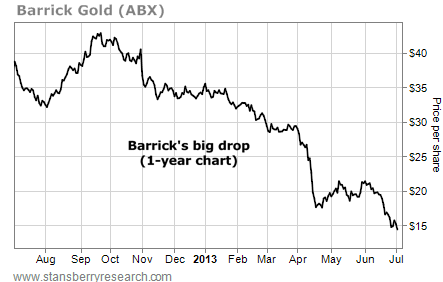 Barrick’s share price is down 73% from its recent high of $55 in September 2011. And it could still fall further on more write-offs.

Barrick is not alone in its struggles. Many of Barrick’s peers have their own “Pascua Lamas” on the books right now. Accountants throughout the gold-mining industry are putting in serious overtime, trying to figure out how to present the ugly truth: If gold prices stay this low, they won’t make any money.

The problem for most miners is that they got used to reporting “cash costs.” This was just the cost of operating the mine, without the litany of other costs that go into sustaining the mine and the company.

For example, Barrick’s second-quarter average “cash cost” was $561 per ounce. But its “all in” cost was actually $919 per ounce. In other words, the accountants fudged about $358 per ounce in costs…

So far, Barrick is owning up to its mistakes and taking its losses. But there are some other high-profile companies with similarly expensive projects. With the gold price in the low $1,200s per ounce, those projects are doomed.

If you own gold miners, give a careful look to their “all in” costs… and see if they have some big, early-stage projects that were good ideas when gold was at $1,500… but horrible ideas at $1,200 and below.

My colleague Jeff Clark has argued that gold miners have sold off too far. And that these stocks are due for a big short-term bounce. I agree that a short-term bounce is likely. But the long-term picture for gold stocks is worrisome. If gold prices remain low, more gold companies will admit they simply can’t survive. And while their recent declines are staggering, more losses are on the way.