It’s an essential industrial metal… and a precious metal as well. Demand for this metal outstripped supply by more than 10% last year… and is set to do it again this year.

And you can buy this metal right now… at a discount to spot prices.

That topped supply by 1.1 million ounces.

(Sales from the Russian state reserve of palladium and investor selling made up the difference.)

This is the largest deficit in 11 years.

Palladium is closely related to platinum.

Automakers use both metals to manufacture catalytic converters, which scrub pollutants out of car exhaust. More than half of the world’s palladium ends up in cars. And car production is on the rise…

So demand for palladium is set to go up. But supply is actually falling… The table below shows the world’s top producers in 2012.

As you can see, when it comes to palladium, you really only need to watch two countries: Russia and South Africa. And production in both countries is in decline.

South Africa’s platinum and palladium mines are old, deep, and expensive. At today’s prices, the mines barely break even. Yet the mining unions are all demanding higher wages. And the South African government is siding with the unions.

When giant miner Anglo American tried to close its most expensive mines, the government stepped in to prevent it. According to the Minister of Mineral Resources:

Anglo has disappointed this country by contributing to unemployment and not being the best business people.

The government will force these mines to operate… but they will produce less and less palladium.

The other big source of supply is Russia. Its mine output fell last year and is set to fall again this year. And it’s releasing less palladium from its state reserves. The Russians sold about 800,000 ounces in 2010 and 2011. But last year, sales fell in half – to just 400,000 ounces.

Once you add it all up, worldwide palladium production is down 11% from its 2006 peak.

In short, demand already exceeds supply. Demand is growing. And supply is shrinking. This should push prices higher.

As you can see from the chart below, that’s already happening. Since last July, palladium prices are in a solid uptrend of “higher highs” and “higher lows.” The price is up 34%. 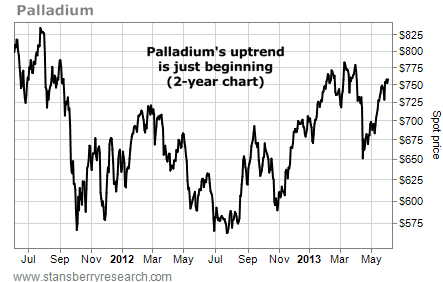 Even with these higher prices, the world is still facing an imbalance in supply and demand. So I expect the trend to continue.

One of the best ways to own palladium is through shares of the Sprott Physical Platinum and Palladium Trust (SPPP). This is a new fund that currently holds 54% palladium bullion and 46% platinum bullion. (Platinum faces a similar supply shortage.)

Right now, the fund trades at a 0.8% discount to the value of the bullion and cash owned by the fund. In other words, you can buy palladium for less than its actual value.

If you tried to buy palladium bullion at a coin store, you’d pay a premium of around 5%-6%. By comparison, SPPP is a fantastic deal.