America’s energy infrastructure has long been the envy of the world.

We have more natural gas pipelines and refineries than anyone else. Yet this infrastructure was designed to facilitate energy imports and domestic distribution. Virtually none of it was built to export energy resources. After all, since 1949, America has been a net energy importer.

Recently, that all changed.

[ad#Google Adsense 336×280-IA]Thanks to the shale oil and gas revolutions (which we’ve covered many times)… America is now a net energy exporter.

Massive increases to natural gas, natural gas liquids (NGL), and oil production in America have dramatically shifted the center of energy production for the entire world back to America.

That means sooner or later… in one way or another… America’s massive energy surpluses will be exported.

And that shift represents the greatest investment opportunity of the decade.

Natural gas (methane) and NGLs (propane, butane, ethane) are key components to the global energy market. They are commonly used for both on-grid electrical power generation and automotive fuel.

But in many U.S. fields, these forms of energy are generally treated as merely byproducts that come out of the wellhead when you drill for oil.

Millions, and even billions, of dollars of these fuels are simply being torched (aka “flared”) at the wellhead today in the U.S… simply because we have more than we need, and it’s currently impossible to export these fuels. 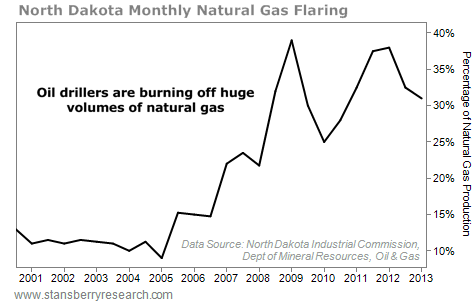 Remind people about this flaring when they argue against free trade for energy.

The simple fact is that we’re not able to use all of the energy we’re producing today. So it’s being wasted rather than being used to generate a profit for our industry and a massive competitive advantage in trade.

The U.S. energy sector’s main impediment to higher prices and bigger profits is outdated regulations – laws passed in the 1970s, when legislators feared we were in dire jeopardy of running out of natural gas and oil. It’s now 2013. Far from running out of oil and gas, more is available today than ever before… by a huge margin.

The lobbying power of the big energy companies is immense. And the benefits to our country of exporting our energy surpluses are likewise massive. We believe, as with all commodities, that the benefits of free trade for energy vastly outweigh the costs.

We know consumers fear that exporting crude oil and other energy resources will lead to higher prices. In the short term, they may. But the small, temporary increases to domestic prices will lead to a vast economic boom as demand for our energy products could produce hundreds of billions in profits for our domestic oil and gas industry.

This boom will inevitably lead to increases in production and lower prices for energy everywhere.

For now, though, the U.S. Department of Energy keeps a tight grip on natural gas. More than 20 firms have applied for licenses to build natural gas export terminals and the expensive liquefaction plants that go with them. The only terminal that has been approved is Sabine Pass – which is owned by Cheniere Energy (NYSE: LNG), a longtime recommendation in my Investment Advisory. If someone in Asia, or South America, or Europe wants cheap natural gas, they’ll have to go through Cheniere.

Of course, Cheniere’s first facility won’t be complete until 2015. But the stock’s run up has been particularly dramatic… up 91% since last July. It’s a “hold” in our portfolio. Eventually, though, other exporters will join Cheniere. They’ll benefit as restrictions on exports ease.

And so will the companies who build the infrastructure needed to expand export capacity. We also own Chicago Bridge & Iron (CBI) in my Investment Advisory portfolio. It’s one of the world’s largest builders of natural gas infrastructure. It’s up 48% since we bought it last summer. And it’s still a buy.

Sponsored Link: I just showed my Investment Advisory readers a company that’s about to exploit a “loophole” in export restrictions. When it does, I expect the stock price will jump by at least 50%. This company hasn’t announced its plans yet… so we can’t be sure. But that means we’re buying before this strategy is priced in. You can learn more about my Investment Advisory – and how to access my latest research – right here.