“You’ve GOT to feel vindicated, Steve!” geologist Matt Badiali said to me yesterday.

What was I vindicated about? It was my investment philosophy…

[ad#Google Adsense 336×280-IA]Many years ago, I shared what I think is a major secret of successful investing with Matt.

In his career, he’s found this secret to be exactly right – and moneymaking.

You should be using this idea for profit, too…

Years ago, I explained to Matt that investments can (and often do) soar higher than is rational… higher than anyone can imagine.

The biggest gains of my career have come by simply NOT SELLING the moment things appear irrational.

Japan is the best example today… 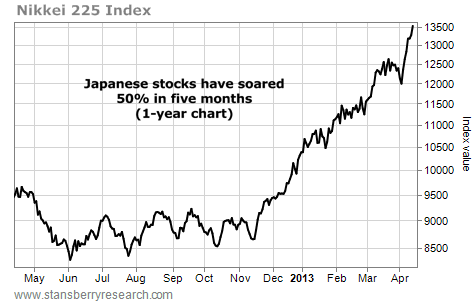 I guarantee that most investors think: “It’s gone so high, so fast… it has to end soon!”

The big trend ends when it ends… not when you think it should end. It is not a predictable thing.

Stocks can (and will) go higher (and lower) than most people can possibly imagine. Trends can (and do) persist beyond reason. It is what it is… but it is true.

Many smart people have a hard time with this concept. It’s not rationally explainable (other than to say that “people act irrationally” in the markets). I know that it’s not “rational” for stocks to rise 50% in five months like they have in Japan.

Every “highbrow” analyst says Japanese stocks have to sell off, that they have to give back some of those gains. Sounds smart. But it’s been wrong. The difference between those highbrow folks and my readers is… my readers are making REAL money in Japan.

Japan’s Nikkei stock index is up over 50% – just since its November 2012 lows – and in my True Wealth newsletter, we’re going to keep holding.

The highbrow investors are trying to tell the Japanese stock market how it’s supposed to act. But the thing is, the market isn’t listening to them. Will the market soar beyond reason? Heck, it already has. And I believe there is much more to come!

Will we sell Japan if our trailing stop is hit? Absolutely! I am not a fool. I am not afraid to sell. On the contrary, I can sell without my pulse going up a beat… When it’s time to sell, I sell. No problemo. And my subscribers will pocket a lot of money in a relatively short period of time, on Japan’s “irrational” move.

Investments often rise farther and fall farther than is rational… farther than you can possibly imagine. Many smart investors don’t want to believe in it. The only little problem here is, it is true. Markets do go higher (and lower) than most anyone can imagine.

You can 1) choose to fight this idea. You can buy more of something that is crashing, like gold stocks, losing money all the way down until you’re hopefully proven intellectually right… even if your account statement is lower.

Or you can 2) choose to not fight it and go along with it. You can ride investments like Japanese stocks to foolish heights, making a lot of money along the way.

For some crazy reason, most people prefer the first option – they choose to fight it. They hope to win some intellectual battle.

Me? I prefer to do what’s working and STICK WITH IT. I’ve found I can make the most money when it makes the least sense to stick with it. (And because I KNOW it makes no sense… it’s easy for me to sell when the time is right.)

If you want to make hundreds-of-percent gains in an investment, you can’t sell at the first sign of a profit. You have to hang in there.

Which do you do? Do you fight it? Or are you willing to stick with it?

Which should you do?