For many years, investors have viewed investments in Canadian tar sands as a great way to get “leverage” to rising oil prices.

[ad#Google Adsense 336×280-IA]Rather than stick a straw in the ground and watch oil gush out, tar-sands producers have to dig up oil sand and run it through very expensive processing facilities to produce quality crude oil.

Because of these high costs, tar-sands companies have thin profit margins.

When oil rises, their thin margins can soar… along with share prices.

But when oil prices fall, this leverage works the other way… and share prices can plummet.

Take Suncor (NYSE: SU), for example. It’s in the top 20 largest energy companies by market cap. It owns refineries in Canada and a small amount of oil production around the world. But its main business is in the tar sands.

And oil prices are dropping. These days, a barrel of Western Canada Select (the benchmark oil price for tar-sands oil) is selling for about $69. If Suncor’s costs hold steady, its margin has shrunk to a razor-thin 2.6%. And like I said, when margins drop, share prices follow.

I think we’re seeing the start of that now. Suncor’s shares are down 11% in the last five weeks. 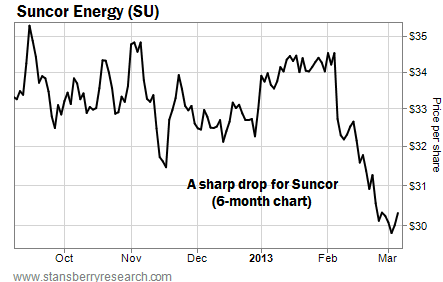 How much farther can they fall? Let’s assume the company continues to sell at its current valuation of 5.2 times cash flow. As you can see in the table below, when Canadian oil prices fall below $70 per barrel, Suncor’s share price could plummet.

I expect the price for a barrel of tar-sands oil to continue to fall. We have a glut of oil in North America today. We’re producing an enormous amount of high-quality “sweet” crude. That makes the thick, low-value stuff from the tar sands even harder to sell.

This is a serious trap for Canadian tar-sands oil producers. Their leverage is working against them… and their shareholders. If you own these stocks, it’s time to exit.