The last two times we looked at gold stocks (here and here), I urged you to be on the lookout for a major rally to get started at any time.

All we needed to trigger the start of the rally was an upturn in the gold sector bullish percent index (the BPGDM).

But that hasn’t happened yet. The BPGDM has continued to fall, and now it’s at an absurdly low level… 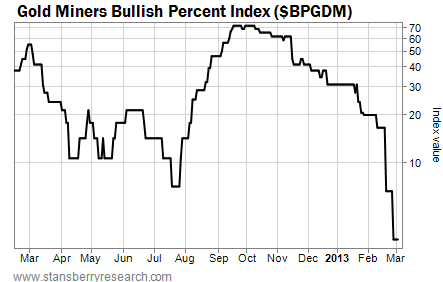 The BPGDM is a percentage-based index, so the range can be anywhere from zero to 100. Readings below 30 indicate oversold conditions in the sector.

And at 3.33, it is almost mathematically impossible for the BPGDM to fall much further.

The BPGDM actually fell to zero during the financial crisis of 2008.

When it finally turned higher and generated a buy signal, gold stocks rallied 100%-plus in two months.

It was one of the best gold-stock-buying opportunities of my life.

We’ll get another fantastic buying opportunity when the BPGDM turns higher this time, too. But I’m no longer waiting for a buy signal to start buying gold stocks. I’m buying them right now. Here’s why…

On Tuesday, the Market Vectors Gold Miners Fund (NYSE: GDX) closed 18% below its 50-day moving average (DMA). The 50-DMA often acts like an intermediate-term magnet for the sector.

GDX rarely moves more than 15% away from its 50-DMA before reversing and heading back toward the line.

The following chart shows what I mean… 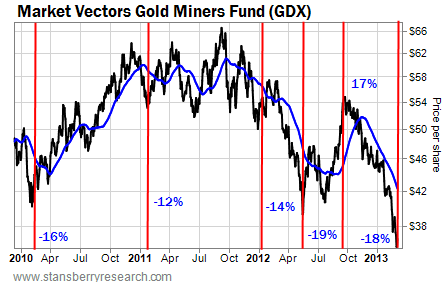 The red vertical lines on the chart indicate when GDX strayed too far from its 50-DMA. Over the past three years, there have been one extreme move to the upside and five extreme moves to the downside. In each case, gold stocks reversed course and headed back toward the 50-DMA.

I’m willing to bet the same thing happens this time around.

We don’t yet have a buy signal on the BPGDM. Given how oversold most gold stocks are – and how the BPGDM is calculated – the sector will have to put on a fairly sizable bounce first before the BPGDM turns higher.

Rather than waiting for that to happen, I like the idea of betting on a “reversion to the mean.” Traders should be buying gold stocks right now.