One hundred billion dollars – that’s how much money IBM has spent on “stealth dividends” since 2003.

The company has said it has plans to spend an additional $50 billion on “stealth dividends” through 2015.

This is wealth that was transferred directly to shareholders – tax-free. But it’s likely not one in 10 of them noticed.

[ad#Google Adsense 336×280-IA]If you are, you’re participating in one of the world’s greatest investment strategies… even if you don’t know it.

He’s a big shareholder of IBM.

And last year, he initiated a similar “stealth dividend” plan for his company – Berkshire Hathaway.

Berkshire Hathaway hasn’t paid out one regular dividend in the decades Buffett has been at the helm. Why would it start paying out these “stealth dividends” now?

For investors, the benefit is huge…

Except for a microscopic blip of underperformance around the year 2000, this strategy never had a five-year period of underperforming the stock market in the last half-century.

That’s according to the latest edition of the book What Works On Wall Street. It describes how well investors can do when they invest in companies that buy back their own shares.

Instead of owning 10% of the business, you own 20%. Your ownership has doubled. And assuming the value of the business is the same, your shares are worth twice as much… and unlike with regular dividends, you don’t have to pay a dime in taxes.

The buyback strategy is simple, in principle. You take the 10% of companies with the largest percentage decreases in shares outstanding each year, and buy them. But it’s difficult in practice… You and I couldn’t easily implement this strategy.

Fortunately, we have a fund that holds companies doing major buybacks… and it has the same record. Starting from any month in its existence (going back to 1996), it’s never had a losing five-year period.

This fund is the PowerShares Buyback Achievers Portfolio (PKW). As the following chart shows, this fund has crushed the S&P 500 since its inception. Its average annual outperformance is just astonishing… at 7% a year. 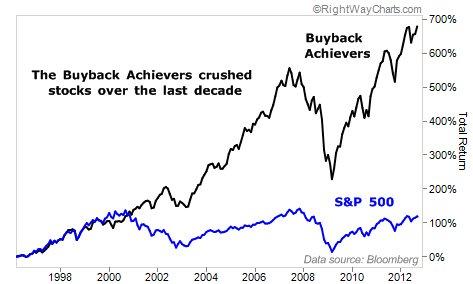 Next year, if the companies in PKW pay cash out as a dividend, it will be taxed at a maximum rate of 39.6%. At those rates, I don’t want dividends… I’d rather the company use that cash to buy back its shares.

History shows that buying a “basket” of buyback stocks makes you real money… As I said, the strategy hasn’t lost money over any five-year period in the last half-century (except for a tiny loss in 2000).

PKW is the easy way to do it. The strategy is simple. It holds companies that have bought back more than 5% of their shares in the last 12 months.

Its top holding is – you guessed it – IBM. Its No. 2 holding is Intel, which is crazy cheap, trading for less than 10 times next year’s earnings.

So far this year, PKW is slightly underperforming the overall stock market. But that doesn’t worry me. Buybacks won’t always beat stocks in the short term. But over the long term, history shows it’s a solid way to beat the overall market.