U.S. STOCKS ARE ON THE BRINK OF A SELL SIGNAL

One of my favorite trading “buy signals” is about to reverse…

Stocks are “officially” overbought when the NYSI rallies above 1,000. They’re oversold when it drops below zero.

[ad#Google Adsense 336×280-IA]The indicator triggers a buy signal when the MACD momentum indicator (the bottom box) extends below -200 and then turns higher.

It triggers a sell signal when the MACD moves above 200 and then turns lower.

Last month’s buy signal was short-lived. But it did lead to a 4% rally in the S&P 500 – which isn’t too bad for a one-month trade.

Now, though, it looks like it’s time to sell.

We’ve had two other sell signals over the past year.

The S&P 500 fell 8% immediately following the sell signal last November. In February, the signal was a little early… stocks rallied for a few more weeks before finally rolling over and falling 10%.

As you can see in the chart below, we’re on the brink of another sell signal today.

There’s no telling for sure what we’ll get this time around. But based on this NYSI sell signal, it’s a good time to be cautious. 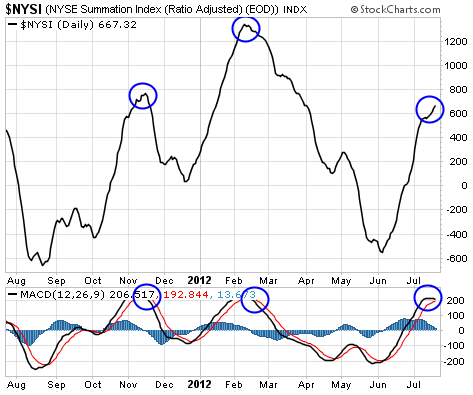