If you’re one of them, make sure to read today’s essay. I’ll show you how to make a safe 10% this year…

I understand why folks are skeptical of the stock market. The European debt crisis is threatening to cause another credit crisis. U.S. job numbers are weak. Banking stocks are tanking.

And while I believe now is a great time to buy blue-chip American businesses, I know many people only want to hold cash and bonds.

[ad#Google Adsense 336×280-IA]If you’re in that category, make sure to focus on municipal bonds.

They’ve been a fantastic investment income-generator in the past… and they’ll continue to be one in the future.

Some people are worried that municipalities are showing signs of trouble.

Twenty-eight municipalities have defaulted on payments this year. Compare that with 52 for the same period last year. Some analysts are still calling for huge numbers of defaults.

But the proof just isn’t there.

Although I’d expect a few more defaults this year, the numbers will still be miniscule – perhaps 0.5%-1% of the total muni market. 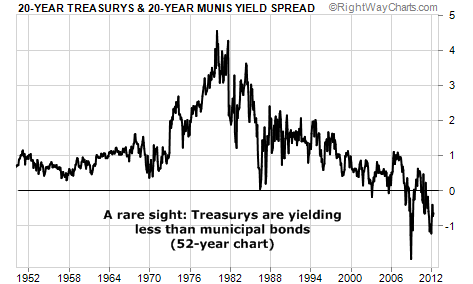 Since 1950, munis paid a lower interest rate than Treasurys almost 90% of the time. The average “spread” between 20-year Treasurys and munis has been around 122 basis points (1.22%). That means munis paid an average 1.22% lower yield than the comparable U.S. Treasury bond.

That makes sense. Investors have to pay tax on the income they receive from U.S. Treasurys. But the income you get from municipal bonds is often tax-free. Treasurys should pay a higher yield than municipal bonds… because they have to make up for the tax you’re paying.

But since the economic collapse and a flurry of dire predictions, the spread been flipped upside down. For the last three years, the spread has been mostly negative. Today, it sits around negative 64 basis points (-0.64%).

Municipalities are not all going bankrupt. And as long as munis keep beating Treasurys, I’ll keep telling my readers to buy. If you’re looking for assets outside of the volatile stock market that can pay you large amounts of income… this is where you need to be.

P.S. This historical anomaly – this “loophole” – between municipal bond rates and regular bond rates might not last much longer. In addition to the muni loophole, I’ve recently compiled a series of safe income “loopholes” in the financial system that could generate enough money to retire on. Most people don’t know about these unique strategies (I doubt your stock broker does). To learn the details and get started taking advantage of these immediately, click here.