If you have a financial advisor you need to read this-especially if you are one of the 99%.

That’s everybody who isn’t a gazillionaire. You may know a few people who fit this bill.

Being a 99-percenter just means that you want to do better.

In that regard, you’re no different than the 1%. They just have more money and by extension more freedom than you.

I know plenty of uber-rich people who are financially inept. You probably do, too.

What sets people apart sometimes, though, is as simple as the questions they ask.

True 1-percenters have this down pat-even if they don’t have a gazillion dollars.

Here are five things you need to ask your financial advisor today if you want to join them.

If you do, you’ll profit more consistently, reduce your risk and invest with greater peace of mind.

And I have no doubt that you will join the real 1%.

1.  Do my investments actually match my risk tolerance and expectations?

No doubt this will cause pushback from more than a few financial professionals. But I just don’t believe any investor needs to suffer the ravages of a bear market.

No financial advisor worth his salt would let a client liquidate into a bear market. And the good ones ensure that their clients have enough cash and ultra-safe investments on hand so they don’t have to.

If your advisor has you leveraged up to the eyeballs, or fully invested in such a way that you can’t endure a protracted downturn, it’s time to find a new advisor.

I don’t care if it’s an up market or a down market, the best advisors will help you pick investments that match your goals within your financial time frame.

The problem faced by many investors today is that they’ve always thought in terms of returns rather than risks. That’s backwards, especially at a time when the riskiest investments – bonds – were supposed to be the most secure.

This is compounded by the fact that many investors — having lost big twice in the last decade –remain underinvested and are faced with playing catch-up. They never should have stepped off the court in the first place.

No matter what the headlines, it pays to stay the course.

In a study of 7.1 million retirement accounts, Fidelity discovered that those who sold their stock mutual funds between October 2008 and March 2009 (the period of greatest volatility we’ve seen yet), more than 50% had not reinvested as of June 30, 2011.

Those who stayed in the markets, and in stocks specifically, saw the value of their accounts rise 50% on average. Those who sat on the sidelines saw an average increase in their accounts of …wait for it… just 2%.

2.  How do my total returns stack up?

Many investors are after the next hot stock or the next sure thing and focus on the percentage returns of specific choices. Understandably, they love being up 25%, 50%, 100% or more.

I’m different. I like not losing money in the first place.

That’s why I’d rather invest with the idea of managing my total returns than throwing darts at specific stocks that may hit…or miss. Over time, I’ll achieve even greater returns.

What people don’t realize is that successful investing is a matter of continuous performance. Not instantaneous performance. It’s one of the reasons I like dividend stocks.

Over time, dividends and reinvestment can count for 85%-90% of total stock market returns.

In some cases, the dividends are so steady and increase so much that you actually make more in dividends than you paid to buy the stocks that produce them.

Ask anybody who’d invested in Altria Group (NYSE: MO) over the past 10 years. It’s the dividends that make the difference. 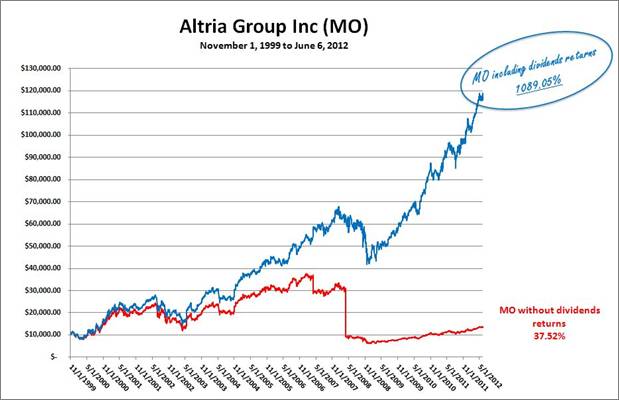 Granted, that takes time, but time is what you have to work with. Instead of trying to cheat it constantly, learn to work with it.

3.  Under what conditions will you sell?

Many advisors actually have no idea on this one. Not only that, but they don’t want you to sell. It’s one of Wall Street’s dirty little secrets.

Selling is not in their best interest. Wall Street makes their money from your money. They want you in the game so they will do everything they can to keep you playing.

This includes creating all kinds of fancy dashboards and gee-whiz programs as a means of drawing you in. You’ve seen the commercials. You know what I’m talking about.

At times, they’ll shift gears and highlight some sort of total care package as in “we care for your money.”

But trust me, benevolence is not in their vocabulary.

If your financial advisor can’t lay out very specific reasons for when and what you would sell, move on. This can be part of some elaborate plan or as simple as a 25% trailing stop.

It really doesn’t matter as long as they have a plan and can clearly articulate that to you without any hemming and hawing when you ask.

This is very closely related to “when do we sell.” And again, most advisors don’t have a clue. You’d think at least they would have this one covered, but most don’t.

And that’s unfortunate because there are two broad considerations to deal with here. Both have a direct impact on your money.

First, timing the markets is a bad idea. According to Barron’s, 85% of all buy/sell decisions are incorrect. That’s because emotional bias drives bad decisions, particularly when it comes to attempts to time the markets.

The latest Dalbar data shows that the return of an average investor trying to time the market is a pathetic 1.9% per year versus the S&P 500 return of 8.4% over the same time period.

More than 90% of portfolio volatility comes from allocation. Get that right and chances are good that you’ll come out way ahead of the game, especially if you use something like our proprietary 50-40-10 portfolio.

Second, the markets have a decidedly upward bias over time. That means outstanding performance is a matter of identifying relative weakness and wading into it rather than running the other way.

For instance, take a look at this chart. 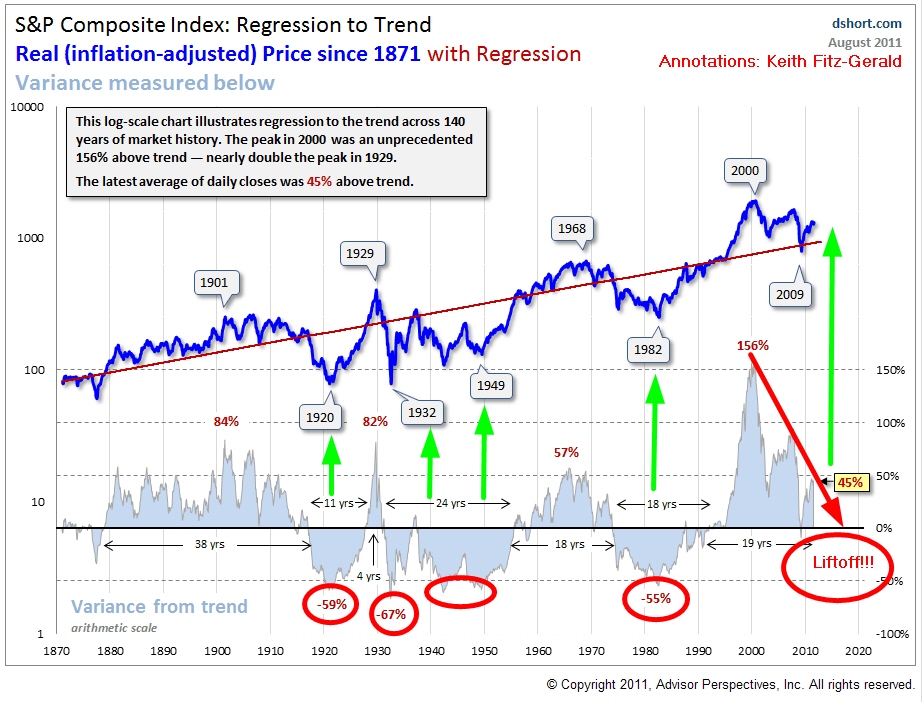 Investors who buy into the markets without understanding the big picture get hammered trying to chase returns. Yet, investors who buy when things are gloomiest tend to build legendary wealth.

You can argue that you’ll never see this in your lifetime, but you’d be dead wrong. Most investors will see 2-5 specific periods in their investing lives where the relative valuations favor more buying than selling.

That’s why I’d fire any advisor who does not recommend cautious additions to your portfolio when everybody else is running for the hills. Or at least rebalancing periodically to capitalize on prices that would otherwise not be so low.

5.  Finally, how are you being compensated?

I don’t believe in paying people for performance they don’t deliver.

So I am not crazy about paying ginormous account management fees if I’m not getting good results. You shouldn’t be, either.

Over time, the typical 1%-2% management fees charged by many big investment houses and managers can really be a drag on performance that bleeds your retirement of much-needed momentum and future results.

I think fee-only advisors are a much better choice. They sit on your side of the table and have your vested interests in mind.

But because they are independent, they disclose all conflicts of interest in advance (or at least they should), and are not beholden to investment banking, ratings or other nonsense that lurks unbeknownst to most investors. They don’t have a financial stake in your investments.

I think that’s especially important at the moment for one simple reason — many of the conflicts that are inherent in today’s investment world are directly the result of conflicted choices. They are presented under the guise of comprehensive planning by brokerage firms that would like you to believe they perform the same functions as investment advisors. They don’t.

What if you don’t work with an advisor right now? Hire one…and don’t delay.

I know they may seem expensive but that’s a matter of perspective.

Given the risks in today’s markets and the inherent problems with Wall Street — not the least of which are pronounced conflicts of interest — I think that is money well spent.

After all, it’s your money and your responsibility-even if you’re not in the richest 1%….yet.