I know this sounds crazy… but the U.S. banking sector hasn’t been this healthy in 25 years.

And that gives you the opportunity to make great money in bank stocks.

If you’re like most people, you can’t stand the idea of owning a bank stock. I know many folks who saw their retirement accounts devastated in 2008… thanks in part to the losses big banks helped create. The rebound has been very slow… So the financial industry has spent several years in a period of little-to-no growth.

But now, the sector is staging a quiet recovery. You can see the recovery in this chart – one of the most important charts in all of finance – which tracks the growth in commercial and industrial lending… 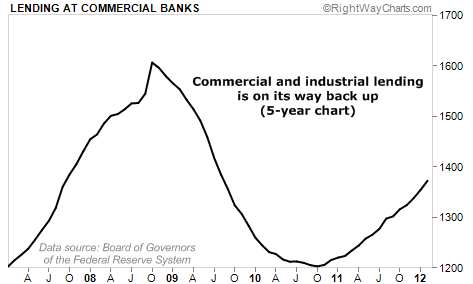 “Commercial and industrial lending” is basically another way to say “loans to grow businesses.” As you can see, the absolute levels of lending are approaching the pre-recession levels of late 2007.

That’s good news for the sector.

Banking is a volume business… Banks make money by borrowing money (in the form of deposits, on which they pay a low amount of interest), while lending money out at much higher interest rates.

This environment has helped banks “heal” themselves. The banks’ capital as a percent of assets is the highest it’s been since 1938. “Capital” is the amount left over after you subtract the liabilities from the assets. It’s like the “net worth” of a company. Now at 74-year highs, this ratio is a sign that the wealth of a business is growing.

And similarly, the liquidity of banks as a percent of assets is at a 25-year high. “Liquidity” measures how much cash and short-term assets are available. It provides protection should liquidity be needed (as in the sudden contraction of interbank credit for several weeks in 2008). But it also provides opportunity should interesting loans and deals come up for the bank.

Taken together… the increasing capital and liquidity measures show that not only are the banks’ businesses more valuable, but they have the strength to grow their businesses or avert trouble… depending on what the future brings.

But the stock market doesn’t quite believe it yet… bank stocks are still relatively cheap. My colleague Brett Eversole just produced this chart below… which uses DataStream information on the U.S. banking sector. As you can see, bank stocks are trading at historically low valuations. 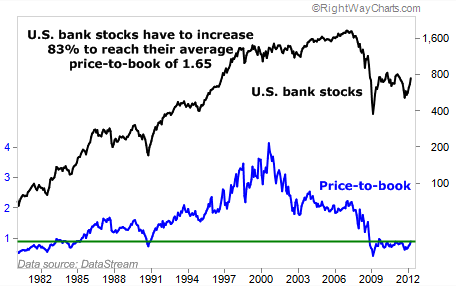 It’s been a rough five years for banks. But as I’ve shown you, the crisis has passed… And they’re as healthy as they’ve been in 25 years. And considering the sector is historically cheap, now is a great time to buy bank stocks.