Right now, platinum is $150 cheaper per ounce than gold.

This is the first time in history this has happened. And it could lead to a 100% gain in 18 months.

The story is simple, as I’ll show you today…

For much of the 2000s, platinum traded at about a 100% premium to the price of gold. And for good reason…

[ad#Google Adsense 336×280-IA]Platinum is hard to come by… The old wives tale is that all the platinum ever mined would fit in a cube 25 feet long on each side. The annual supply of platinum is about 5% the annual supply of gold. The deposits are located in unstable countries, like Zimbabwe and Russia.

And right now, because platinum prices have declined so much (down 20% in five months), there’s no incentive to get it out of the ground.

Last month, Bloomberg reported South Africa’s Anglo American Platinum – the world’s biggest platinum producer – said production costs will reach $1,567 per ounce this year. Yet the price of platinum now is around $1,500 per ounce. What’s the point in producing platinum when you lose money on every ounce you produce?

Meanwhile, platinum can do everything gold can do… and more. Platinum can be used for jewelry. (The Chinese prefer platinum.) And it can be used as a store of value or money – just like gold.

Platinum might even be a safer store of value than gold… Here’s why:

I recently spoke with one of my most trusted contacts in the coin business, Van Simmons. Van brought up an interesting point: “If they outlaw gold someday, the chances of them paying any attention to platinum are slim to none. This is a safe way to hold precious metals.”

Van told me he just bought some Australian platypus platinum coins for himself.

So… platinum is harder to come by than gold now… it’s beautiful… it’s useful… and it’s possibly a safer way to store value than gold. With all that, it’s stunning to me that platinum is so cheap relative to gold today – at a $150 discount per ounce. 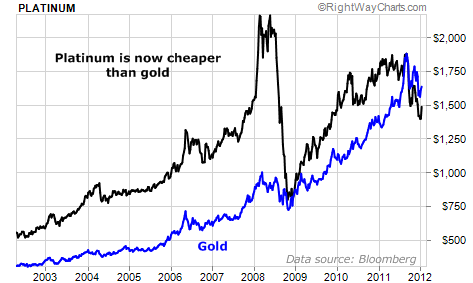 You can see a few things here…

Most importantly, the price of platinum has traditionally been at a significant premium to gold. The price of platinum “swan dived” during the financial bust of 2008, when people thought the world was coming to an end. Then you can see the platinum price recovered dramatically.

If you were smart enough in October 2008 to buy when the price of platinum fell to the price of gold, you would have doubled your money over the next 18 months.

If history repeats, you could double your money in 18 months.

So if I were choosing between platinum and gold right now, I’d have to go with platinum. Platinum actually has several advantages over gold: It is more durable than gold. It doesn’t wear out or tarnish. And it’s even cheaper than gold right now.

I believe now is a good time to buy platinum. But I could be early here. The safest way to do this is to wait for an uptrend.

Platinum wins in three ways… It’s a precious metal. It has an industrial use. And now it’s at a historic discount to gold. Huge gains are possible.

P.S. The simplest way to own platinum is through an exchange-traded fund with the symbol PPLT. It trades just like stocks on the stock market. (Importantly, it’s fully backed by physical metal, not some financial contracts.)

As always, I receive no compensation from either of these folks… They have just proven over a very long time to treat subscribers right.