[Editor’s Note: We’re closing out the year with a few of our best “outside the stock market” ideas. And we’re beginning with one of the most important. As you’ll see, this is an unconventional way to invest and think about stock ownership. It gives you the “sleep at night” confidence that your income will rise every year, regardless of what the market is doing…]

For years now, I’ve been pounding the table on World Dominating Dividend Growers.

These companies are at the tops of their industries. They gush free cash flow and pay out ever-increasing dividends like clockwork. Some of these companies have grown their dividends for 40 years in a row.

[ad#Google Adsense 336×280-IA]But I realize many of you doubt the wisdom of owning these stocks. So today, I’m going to show you why dividend growth stocks are the closest to a sure thing that exists in the stock market. They’re the only source of return you can count on to rise every year. They’re unbeatable investments.

I’ve told you about this many times. But now I’d like to show you… 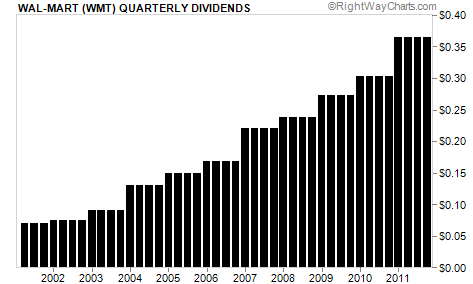 Through all of it, Wal-Mart has continued to grow its business and dividend payment by 15.89% per year. At that rate, if you buy today, you’ll earn a double-digit yield over your original cost within eight years. 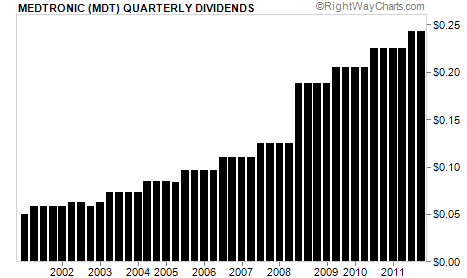 Now let’s compare that to the performance of the S&P 500 as a whole. The chart below tracks the total dividend paid out by S&P 500 stocks over the same 10-year period… 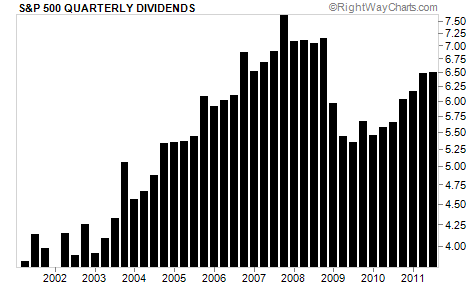 It’s not bad. The total dividend payment is up overall during the period. But when things got tough in 2008 and 2009, many companies slashed their dividends. And now, the S&P 500 is paying about the same amount it paid in 2006.

Five years of dividend growth was wiped out of existence. If you were depending on dividends from the average stock as a source of income, you took a heavy pay cut.

The bottom line is, the market can’t promise you growing income. It can’t even promise you steady income. Only the World Dominating Dividend Growers can.

They’re the best investments around. And if you’re investing for income, they’ll beat the stock market, year after year.