If you’re already rich, there’s no need for you to read this guide.

If you’re not rich – if you’re extremely interested in learning how to increase your wealth by five or 10 times over the coming years – please read on.

This guide – which we plan to send you in four separate pieces this week – is a collection of essential rules on how to invest in a sector that produces gains so large, you can not only buy a new boat with your winnings… but also the lake it floats in.

Or how about the payoff in Canplats Resources… a small company that skyrocketed 12,650% in seven years?

Or the payoff registered by Diamond Fields. Shares of this tiny company sold for just $0.05 each in 1993… and then for $42.97 three years later. That’s an astonishing 85,840% return… It netted legendary speculator Doug Casey $15 million on a single trade.

These gains are possible in the business of finding and tapping the world’s gold, copper, oil, diamond, and uranium deposits – the natural resource business.

It’s a business where just one big strike can change your life forever.

But before we go further, please realize investing and speculating in natural resources can be an incredibly risky activity. And it’s why folks who are already rich – who are simply interested in capital preservation – don’t really need to be in natural resources. It’s simply too volatile an area for conservative investors.

In fact, most investors who deal in this sector are constant losers. But this guide will give you the keys to making a fortune in resource stocks.

The first lesson is how to master the booms and busts of the resource sector… (Hint: it’s all about the trend.)

There’s one aspect of the resource sector that is so important, if you don’t master it, nothing else you do right can possibly help you. You will lose every cent you put here. Insiders call this aspect “cyclicality.”

Contrast this to a “noncyclical” asset, like shares of Johnson & Johnson (JNJ)…

JNJ is the world’s largest health care and consumer products company. It sells everyday items like Listerine, Tylenol, and Band-Aids. Demand for these products is relatively constant. Even recessions do little to dent mouthwash sales. This makes JNJ shares relatively noncyclical. They don’t go through wild booms and busts.

Natural resources, however, do go through wild booms and busts. Consider the case of uranium from 2000 to 2008…

Uranium is a natural resource whose chief use is fueling nuclear-power reactors. For much of the 1990s, uranium prices were mired in a bear market. Excess supplies from the previous years depressed prices.

Low prices meant no one was investing in new uranium deposits. There simply wasn’t any money in it. In 2003, for example, it cost miners $20 per pound to mine uranium, but they were selling it for $15 per pound. Miners were losing about $5 on every pound of uranium they produced. Mines closed and no new ones opened.

Then… after years of bust, we started seeing increased demand for the cheap fuel. But the lack of investment in new uranium projects meant supply was limited. Increased demand and low supply pushed uranium prices higher and higher.

As you can see from the chart below, prices quadrupled in about three years: 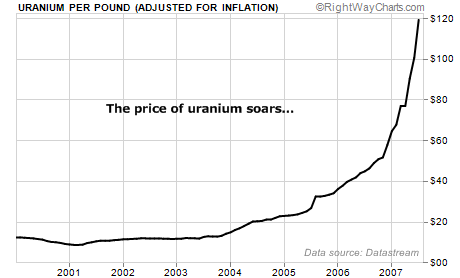 In response to this new uranium boom, exploration companies went wild. You can see from the table below of uranium exploration spending in Canada (a major uranium-producing country) how fast the industry increased spending:

This shows you that when a commodity goes into a “boom” cycle, it attracts huge amounts of money. Uranium eventually climbed to $140 per pound… over 10 times higher than 2011’s depresses levels. 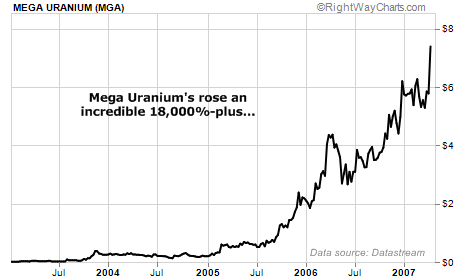 In any given resource sector, the cure for high prices is high prices. When huge amounts of money flow into a sector, it creates tons of new companies, bloated values, increased supplies, and eventually, plunging prices.

Hundreds of new uranium exploration companies were created from 2004 to 2007 in order to capitalize on the new uranium boom… many with no real assets or even a hope of becoming a real company.

As you can see from the updated chart of uranium (below), the boom turned to bust. Uranium prices collapsed from $140 per pound to $40 per pound. 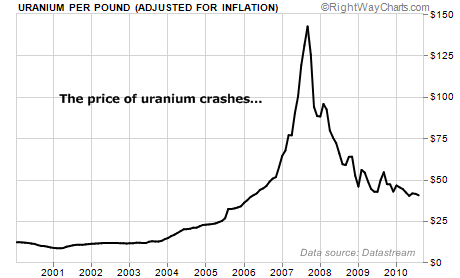 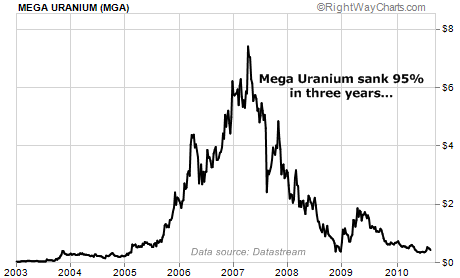 Investors lost $0.95 of every dollar they invested if they followed the crowd, bought at the top, and didn’t cut their losses.

It’s not just uranium. This happens all the time in natural resources.

When “bust” periods of excess supply depress prices, people find new uses for the cheap resource. At the same time, producers of that resource can’t make much money, so they stop investing in new projects to bring on supplies.

This “increased demand, decreased supply” situation creates a crunch that drives prices up by hundreds of percent… and causes incredible stock gains in the companies that focus on that resource.

Then, after prices rise, increased supplies come online… Producers of that resource invest heavily in new projects to cash in on the “boom” times. Meanwhile, users of the now-expensive resource look for alternatives. This decreases demand.

The “decreased demand, increased supply” situation can crush the price of the commodity… and send the share prices of commodities that focus on that resource down more than 90%.

All commodities are highly cyclical. And while these big cycles chew up most crowd-following investors, you can use them to make incredible profits in mining, agriculture, and energy stocks. You simply get into booms early and avoid the big busts.

My friend Rick Rule is one of the greatest resource investors in the world. He’s made himself and his clients hundreds of millions of dollars with his ability to spot great values, get into big resource trends early, and avoid big resource busts.

He coined the phrase, “You’re either a contrarian or a victim.”

Rick’s phrase captures everything you need to know about resource trends. To make huge gains, you have to buy assets when nobody wants them – like uranium stocks in the late 1990s. This is when assets get very cheap. Going against the crowd in these situations will give you a sick feeling in your gut. But that’s a sign that you’re probably doing the right thing.

When the crowd wakes up to the boom times that follow the bust, they’ll bid up your shares to incredible heights. That’s when you – the contrarian – sell out to the unfortunate victim.

P.S. In the next installment of my guide to resource investing, I’ll show you the “tools” you need to do the job right. Whether you’re a risk-averse retiree or an experienced trader, it’s a must-read.

Sponsored Link: Matt Badiali is the editor of the S&A Resource Report. In the last year, Matt has closed 20 winning positions… five of which earned subscribers triple-digit gains. To access this service – and learn about one of the most bizarre resource ideas Matt has ever discovered – click here.