Not only did I recently invest another $50,000 into Microsoft (MSFT), but I also JUST invested $36,777 into a “second” stock that looks CHEAP and is paying HUGE income right now! After you read my report on Microsoft below, check your email. You should have your first issue of Daily Trade Alert. In it, I reveal the name of this “second” stock I’ve been loading up on as well (the one I just invested almost $37,000 into). But first, let me tell you about why I’m so excited about Microsoft — my #1 stock to buy and hold “forever”…

I recently doubled down on my position and invested another $50,000 into this world dominating company. I now own over $100,000 worth of this one stock… and I’m not done. I plan to continue accumulating shares and I’ll tell you why just ahead. 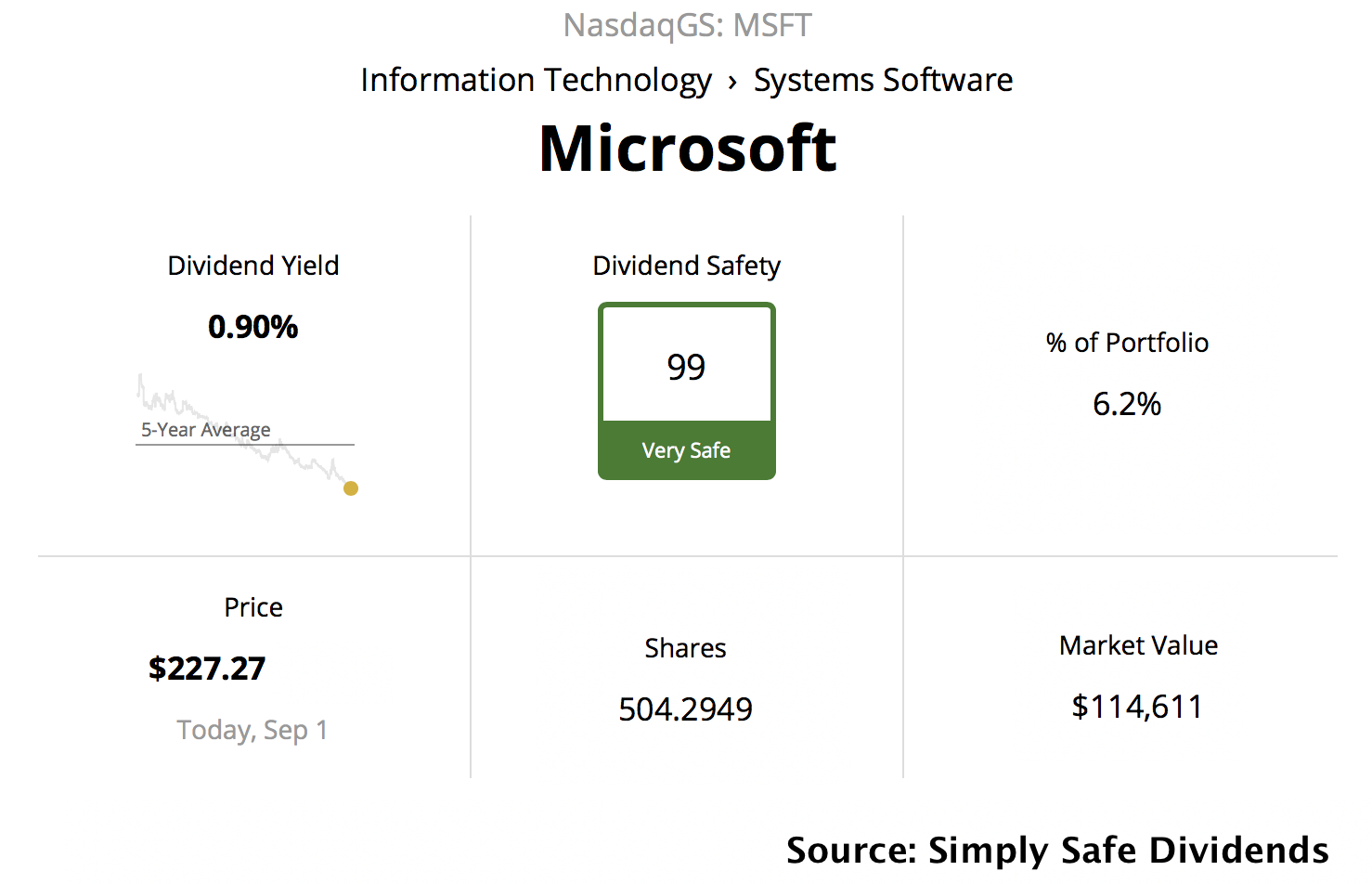 In case you’re interested in watching me pull the trigger on my $50k purchase, here’s a screen-record as I buy shares in my retirement account at Fidelity…

Microsoft (MSFT): My #1 Stock to Buy Now and Hold Forever
So, why am I loading up so much on Microsoft — especially now, while the stock is near all-time highs?

Before I get into that, I should point out a few things…

First, my $100,000+ position in Microsoft isn’t as crazy or risky as it may sound. That’s because my stock, bond fund, rental property and option portfolios are made up of over 80 diversified investments, that when totaled, value around $3 million.

So even after this $50k purchase, my Microsoft holding only makes up less than 4% of my total investment portfolio.

In fact, considering the quality and growth potential of this company, I’d even be comfortable increasing my position size up to 10% of my portfolio. That’s how much I like this stock and why I plan to continue buying shares — even as they’re hitting all-time highs. 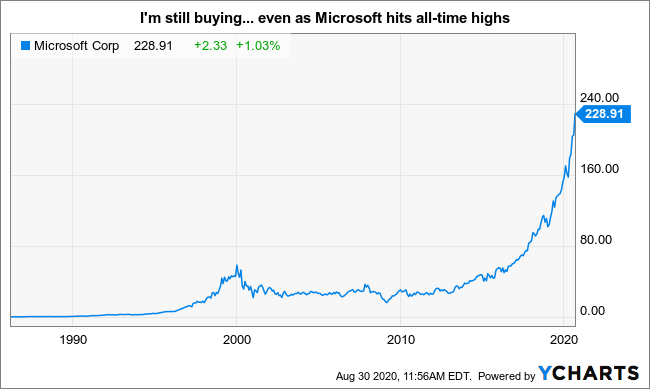 Second, while I typically prefer to buy stocks when they’re undervalued and paying above average dividends, there is indeed a place in my portfolio for “growthier” plays that offer less income (or even no income) and that demand higher, and sometimes uncomfortable, valuations.

In fact, the single best way I was able to scale my investment portfolio to around $3 million was by investing in growth companies — primarily my own private businesses, but also high-flying publicly-traded companies like Amazon, Apple, Alphabet, Alibaba and of course, Microsoft. 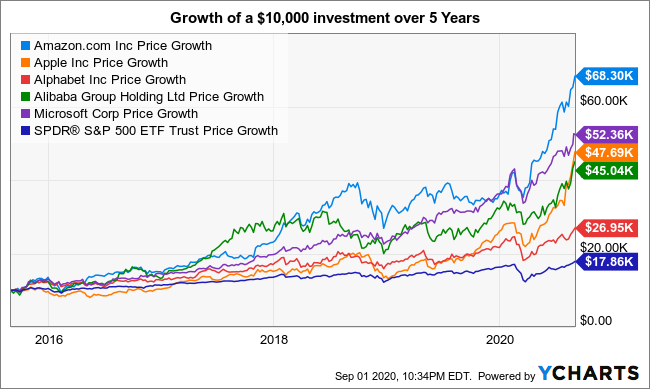 Over the years, I’ve been able to pick up shares of Apple, Alibaba and Microsoft at compelling valuations, but I don’t think I’ve ever purchased Amazon or Alphabet “on sale.” Quality demands a premium, so in most markets, if you want to own a piece of a high-quality growth company, you’ve got to be willing to pay up for it.

The idea is to use these companies to grow your money faster and larger than a typical income-paying security does. Once you’ve grown your money, sell the investment (if it still doesn’t generate income at that point), and redeploy that cash, which has ballooned, into income-paying investments.

Third, I’m not opposed to buying at all-time highs. While I primarily invest on fundamentals and look for value, I do recognize the power of momentum and psychology in investing. A technical analyst would suggest not to “fight the trend” because stocks with strong momentum that are hitting highs can continue to hit higher highs. I agree.

So, getting back to the question, why Microsoft… and why now? There are plenty of reasons, but here are the biggies:

Microsoft Has Visionary Leadership
Only about 7 or 8 years ago, Microsoft was viewed as past its prime. It was “Old Tech” or “Tech Classic”. As the computing universe changed, Microsoft was slow to adapt.

While competitors were embracing “the Internet of things” (IoT) and going mobile, Microsoft was still hawking Windows and Office disks for PCs.

A lot of the new stuff Microsoft did try went bust. Remember Zune? How about Vista? What about Cortana? You get what I’m saying.

Steve Ballmer succeeded Bill Gates as CEO in 2000. While Ballmer went on to make himself a ton of money, Microsoft’s reputation was taking a beating. The stock still hadn’t recovered from the dot-com bust at the turn of the century. 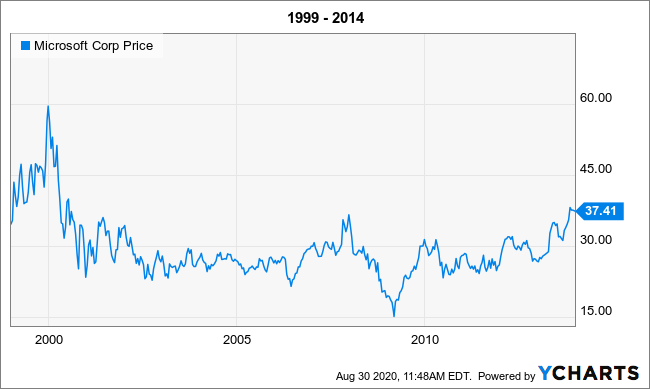 Then in 2014, Microsoft promoted Satya Nadella to CEO, and he has succeeded spectacularly… 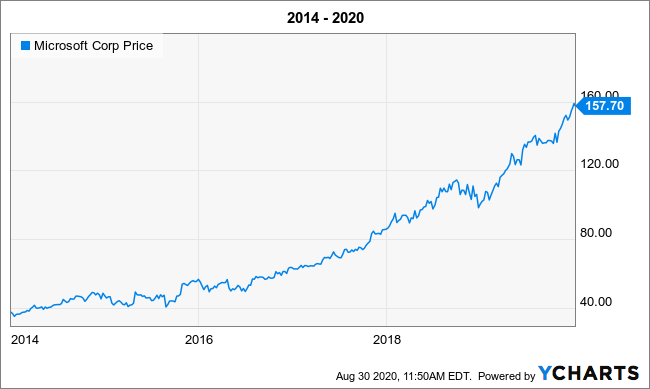 Almost instantly the company transformed, and Microsoft became an exciting, innovative business for today AND tomorrow… offering products and services that companies, institutions and governments need and that consumers want.

And while many businesses are struggling due to COVID-19 and the new “stay-at-home” economy, Microsoft is actually seeing an uptick in demand (and thus, revenue) for its cloud and remote collaboration services like Teams, productivity software like Office 365 and personal computing devices like Surface. Just think about the boom in virtual appointments and remote education / learning during this pandemic.

The bottom line is that in both good times and bad, Microsoft’s products and services are in demand… and that translates into a lot of cash coming into the company.

No wonder Microsoft has grown to become one of only three trillion-dollar companies in the entire world (the other two are Apple and Amazon). 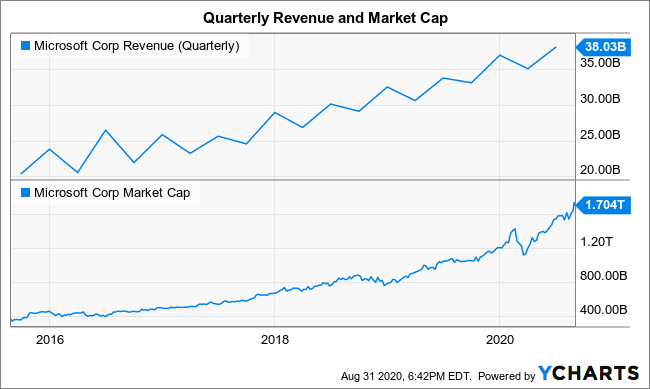 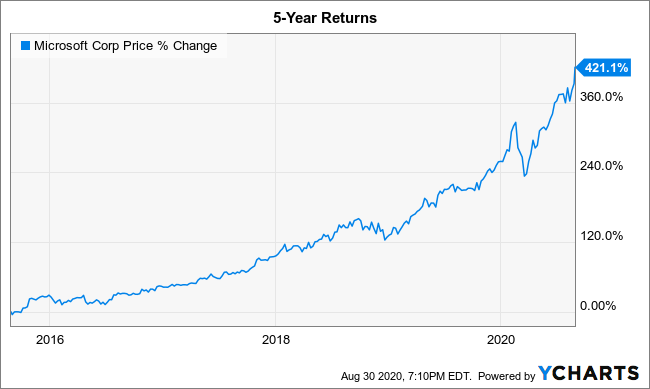 That’s absolutely incredible growth for a company as big as it is.

But more importantly, can it keep growing? And with the stock hitting all-time highs, is now really a good time to buy? In short, yes.

Add in the fact that Microsoft is putting itself right in the middle of the coming quantum web boom, and we’re looking at a stock that can continue to defy gravity.

And it gets better…

Microsoft Pays an Extremely Safe and Growing Dividend
Not only is Microsoft a growth stock… but it’s also a dividend growth stock. 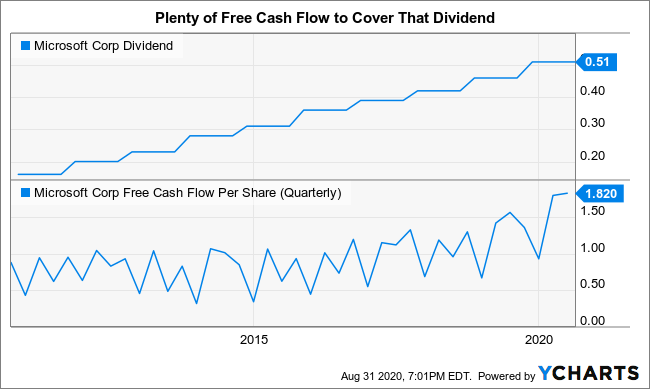 Simply Safe Dividends gives the stock a “Dividend Safety” rating of 98 out of 100 — one of its highest ratings — and my colleague Jason Fieber recently named Microsoft as “The SAFEST Dividend Stock on the Planet”.

The only issue with the dividend is that because the stock’s share price has been growing so fast, it only yields around 1% percent right now! I’m not going to complain though — I look at Microsoft’s dividend as more of a nice little bonus than as a major contributor to my portfolio’s income stream.

I own Microsoft more for growth … and for being one of the highest-quality businesses in the world.

Along with Johnson & Johnson, Microsoft is one of only two companies to receive an AAA credit rating from Standard & Poor’s. That’s a better rating than the United States of America.

Microsoft’s balance sheet is stellar, and average annual earnings growth is expected to be about 15% over the next 5 years … so it’s hardly surprising that most analysts are bullish. 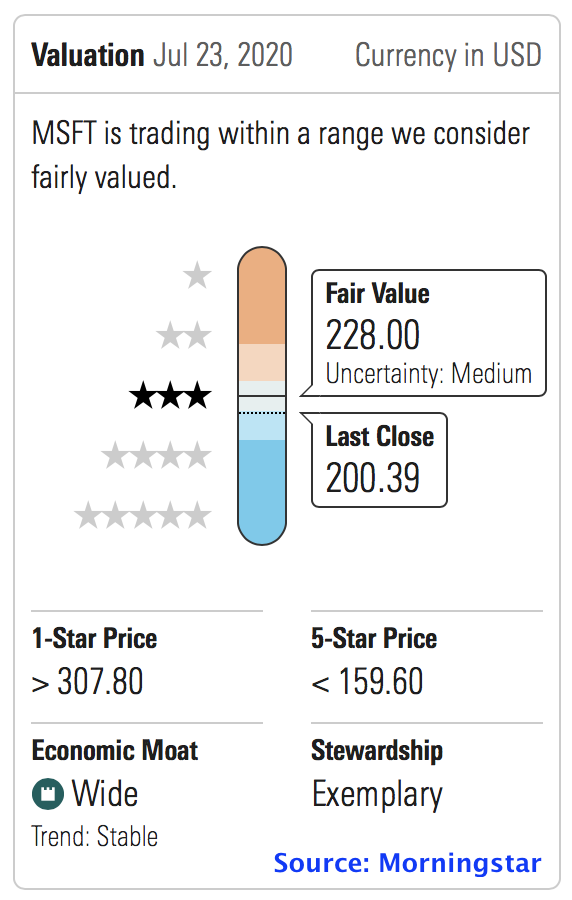 The Valuation “Problem”
The biggest issue, especially for value investors, is that the stock seems overvalued. As I write, its forward P/E ratio is around 35.

But Morningstar considers it fairly valued… and several other analysts, like CFRA, have 12-month target prices that forecast 10% appreciation or more.

The truth is, if you want to own the kind of quality you get with Microsoft, sometimes you have to be willing to pay up for it.

I’ll Keep Buying and Holding
My plan is to keep accumulating shares when they don’t look outrageously expensive. One day I’d like to pass down my shares to my son and hand him a safe and growing passive income stream. My son is only four years old and so hopefully I’ve got some time to keep building out my position size in Microsoft.

I know a lot can happen between now and then, but if any company can both survive and thrive in whatever market comes our way, I’d put my money on Microsoft.

All of this is why I’ve already loaded my portfolios with Microsoft stock… why I recently invested another $50,000 into it… and why I plan to continue to accumulate shares when I can.