When the curtain closed on 2022, the ageless Dow Jones Industrial Average, widely followed S&P 500, and growth-dependent Nasdaq Composite, respectively finished lower by 9%, 19%, and 33%. It was, collectively, the worst performance for Wall Street in 14 years.

But don’t think for a moment that a down year for equities did anything to dent Wall Street’s optimism. Even though down years are an inevitable part of the investing cycle, analysts are well aware that the three major U.S. stock indexes head higher over the long term. This is why most analyst price targets point to upside in equities.

But there’s a big difference between expecting a stock to gain 20%, 30%, or maybe 50% over the next 12 months, and believing it’ll skyrocket 600% or 700% over the next year. What follows are three under-the-radar small-cap stocks that select Wall Street analysts believe offer between 590% and 772% upside in 2023.

Ocugen: Implied upside of 590%
The first lesser-known stock with to-the-moon potential in 2023, at least according to one Wall Street analyst, is clinical-stage biotech stock Ocugen (OCGN). Analyst Jonathan Aschoff of Roth Capital foresees shares of Ocugen reaching $8, which, if accurate, would represent 590% upside from where the stock closed on January 19.

As the company’s name alludes, its primary focus is researching and developing ocular therapies. However, it’s Ocugen’s foray into the COVID-19 vaccine arena that’s raised eyebrows over the past couple of years. 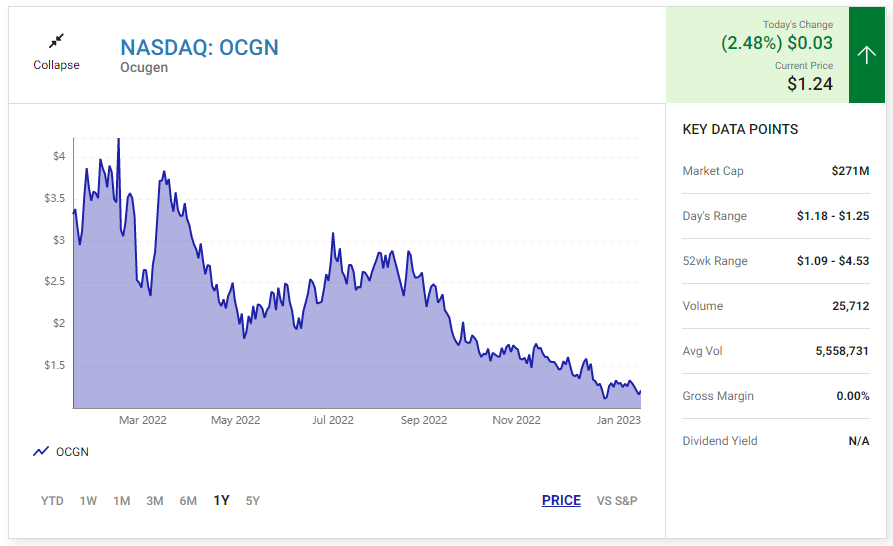 Just two weeks ago, on Jan. 9, 2023, Ocugen announced positive top-line data for COVID-19 vaccine candidate Covaxin, which differentiates itself by using inactivated parts of the SARS-CoV-2 virus to teach a person’s immune system how to recognize and fight infection. In this phase 2/3 study, Covaxin was well-tolerated in vaccine-naïve patients and those who’d been administered the popular messenger-RNA vaccines by either Moderna or Pfizer/BioNTech. Success in this phase 2/3 trial presumably moves Ocugen closer to commercialization.

But there are a number of concerning holes in this optimistic growth story. For starters, Covaxin is commercially licensed by Ocugen from India’s Bharat Biotech. Ocugen has the right to sell Covaxin in the U.S., Canada, and Mexico. That’s it. Though Mexico has granted emergency-use authorization (EUA) for Covaxin, the U.S. and Canada have not. If these regions don’t approve or grant EUA status to Covaxin, Ocugen isn’t going to generate much in the way of revenue from the vaccine, no matter how well it sells in other countries around the globe.

Another problem for Ocugen is that Covaxin’s vaccine efficacy (VE) didn’t exactly jump off the scales in 2021. Bharat Biotech’s large-scale trial in India produced a solid, but not eye-popping, VE of 78%. Comparatively, Moderna, Pfizer/BioNTech, and Novavax reached respective VEs, of 94.1%, 95%, and 90.4% in phase 3 trials. VE may not be everything when assessing a COVID-19 vaccine, but it’s been a powerful headline number that’ll make it incredibly difficult for Covaxin to stand out.

While Ocugen does have its NeoCart program in late-stage clinical trials for the treatment of articular cartilage lesions of the knee, the company looks to be a long way from generating meaningful revenue. In other words, Aschoff’s $8 price target appears highly unlikely to be reached in 2023. 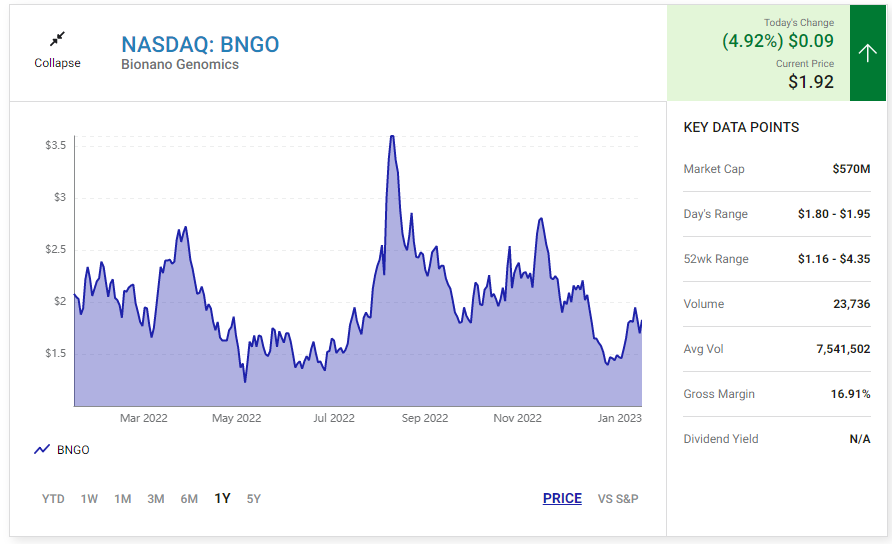 Bionano Genomics: Implied upside of 605%
A second under-the-radar stock with monumental upside, based on the lofty price target of at least one Wall Street analyst, is genome analysis company Bionano Genomics (BNGO). Oppenheimer analyst Francois Brisebois — as well as his predecessor Kevin DeGeeter — has laid out a case for Bionano stock to reach $12. If this price target were to become a reality this year, Bionano’s shareholders would enjoy a 605% gain from where shares ended this past Thursday, January 19.

The core catalyst for Bionano Genomics isn’t tough to locate. The company’s optical genome mapping (OGM) system known as Saphyr has the potential to be a game-changer for clinical researchers, universities, and drug-development companies.

For investors who crave positive news, Bionano isn’t lacking. The best thing this company can do is raise awareness of Saphyr by allowing it to detect structural abnormalities in hard-to-treat diseases, partnering with brand-name companies on projects, and (unofficially) going head-to-head against its chief competitor(s). Saphyr appeared to be a more-effective and less-costly solution than Pacific Biosciences OGM in a study released two years ago, and has been remarkably effective at identifying structural variations that could lead to new treatment approaches for difficult-to-treat diseases.

What’s more, Bionano’s management team took advantage of the company’s share price run-up at the beginning of 2021 to sell shares and raise capital. With $180.2 million in cash, cash equivalents, and what the company deems “available-for-sale securities,” as of the end of September, it offers a long funding runway.

But if there’s a knock against Bionano Genomics, it’s that Saphyr isn’t approved by the U.S. Food and Drug Administration (FDA) as a diagnostic system. Without this approval, the company’s ability to install Saphyr systems is somewhat limited. Though it was able to grow this installed base to 240 Saphyr systems in 2022, this is nowhere close to the number necessary to generate recurring positive operating cash flow and profits.

Until Bionano gains better clarity on Saphyr from an FDA approval standpoint (which could take years), a $12 price target is likely too optimistic.

For those unfamiliar, “iBuying” is where technology-driven real estate companies purchase properties for cash from sellers. The advantage of the iBuying route for the seller is convenience. There’s no need to have potential buyers looking at your property for weeks or months on end. As for the iBuyer, it provides an opportunity to either scoop up properties at a discount to perceived market value, or generate a sizable fee when reselling the property back onto the market (i.e., house-flipping). 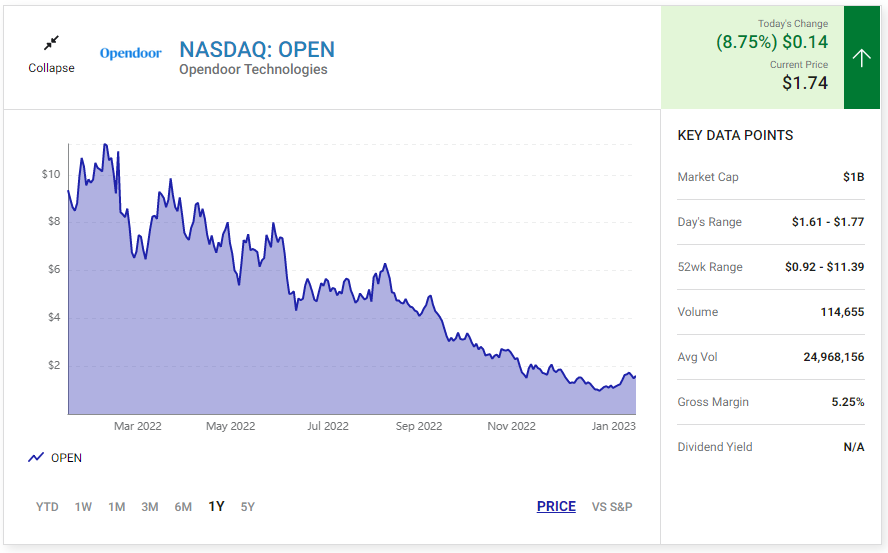 Opendoor’s operating model is really simple to understand. It purchases homes with cash and charges a 5% fee. Whereas some iBuying companies choose to hang onto the real estate they purchase in the hope of booking a larger gain later, Opendoor is all about churning. It wants to buy homes and resell them as quickly as possible.

On the bright side, Opendoor’s two biggest iBuying competitors have exited, stage left. In November 2021, Zillow announced that it would exit its iBuying business after its model did a poor job of valuing homes for resale. One year later, Redfin followed suit by shutting down its iBuying platform RedfinNow and laying off workers. With less competition, Opendoor Technologies has an opportunity to dominate the real estate iBuyer space.

However — and this is a pretty big ‘however’ — the housing market is undergoing a massive transformation as it absorbs a huge uptick in mortgage rates. After more than a decade of historically low lending rates, getting homebuyers excited about a 6% or higher mortgage rate has proved to next to impossible. This is making it difficult for Opendoor to buy new homes, as well as fairly value the homes it’s purchasing.

To add to the above, rapidly rising mortgage rates have also put a hurting on Opendoor’s balance sheet. Sizable valuation adjustments on the company’s real estate inventory are leading to wider net losses.

Although Opendoor Technologies has plenty of cash (for the moment) and the ability to bolster its capital position by reducing its real estate inventory, the real estate environment simply doesn’t look conducive to a 772% run-up in 2023.