However, it’s a market of stocks, not a stock market. The market isn’t a monolith. The S&P 500 is comprised of – you guessed it – right about 500 different stocks. They don’t move in lockstep.

Indeed, some stocks are down heavily from their recent highs.  And for those still in accumulation mode and buying, that’s a good thing. After all, price and yield are inversely correlated. All else equal, lower prices result in higher yields. And if you have a goal to live off of totally passive dividend income, like I do, this gets you there that much faster.

Today, I want to tell you about five dividend growth stocks that are down 20% or more from their recent highs.

Baxter is a multinational healthcare company with a market cap of $23 billion. Baxter’s products primarily focus on treating kidney disease and other chronic and acute medical conditions. What’s great about healthcare – and why I love investing in great healthcare businesses – is the secular growth. If you need medical care, things like geopolitics with China, the strength of the dollar, or whether or not the US is in recession – yeah, these things just don’t matter to you.

The global population is growing. And with that comes ever-more human beings that will need medical care over their lifetimes. Plus, people are living longer than ever before. And, on a global average, we’re richer than ever before. All of this adds up to more healthcare spending, which then adds up to increasing dividends for those companies benefiting from that.

The healthcare company has increased its dividend for six consecutive years. Now, Baxter’s dividend growth track record isn’t as long as it ought to be. And that’s because this company was involved in a major corporate split a number of years ago. 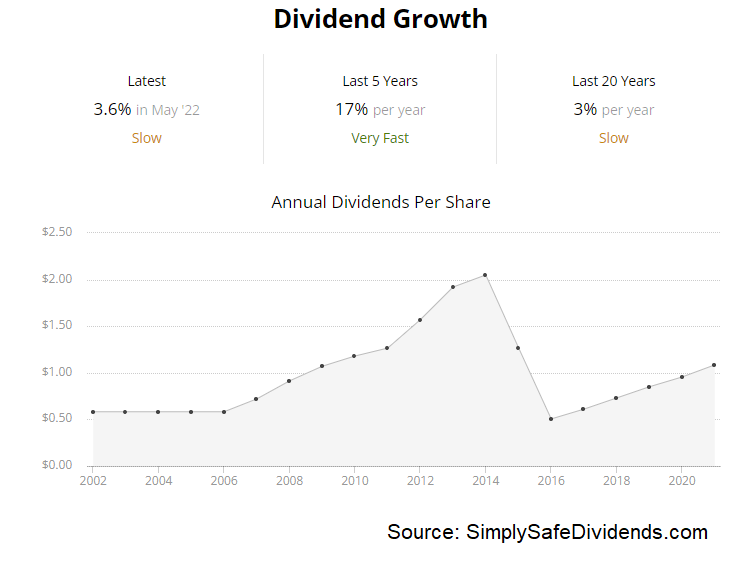 Baxter is mainly the medical devices portion of what was the legacy company, whereas the biopharmaceuticals side was spun off into what ultimately became Baxalta International Inc., which itself later got bought out. If not for the separation, Baxter would almost surely have a much longer dividend growth track record.

Still, we’ve got a five-year DGR of 14.5%, which is great, although more recent dividend raises have been in the single-digit percentages. The stock also yields 2.6%, which is 140 basis points higher than its own five-year average. And the payout ratio is only 32.5%, based on current midpoint guidance for full-year adjusted EPS. 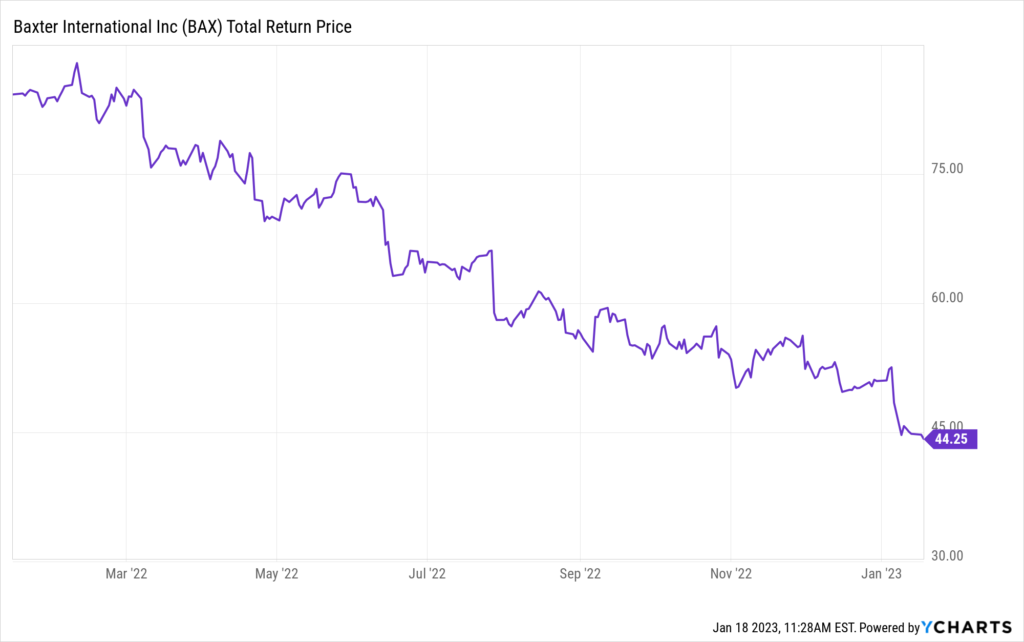 In my view, Baxter is interesting here. The company has had some missteps, especially in regard to M&A. But, structurally, it’s a great business model in one of the best areas of the economy. I think Baxter is very much worth looking closely at after the stunning 50% fall.

The second dividend growth stock we have to go over is Best Buy (BBY).

Best Buy is a North American consumer electronics and appliances retailer with a market cap of $19 billion. I’ve gotta say, Best Buy has really surprised me.

If you would have asked me even five years ago, I would have guessed that they’d be troubled by now. Nope. This retailer hasn’t just been surviving.

Best Buy has been thriving. Despite a retail graveyard all around the business, Best Buy has been growing its top line and bottom line admirably. And with the omnichannel strategy clearly in a groove, Best Buy’s best days look to be ahead of it. That bodes well for continued growth across the business, which should translate over to the dividend. 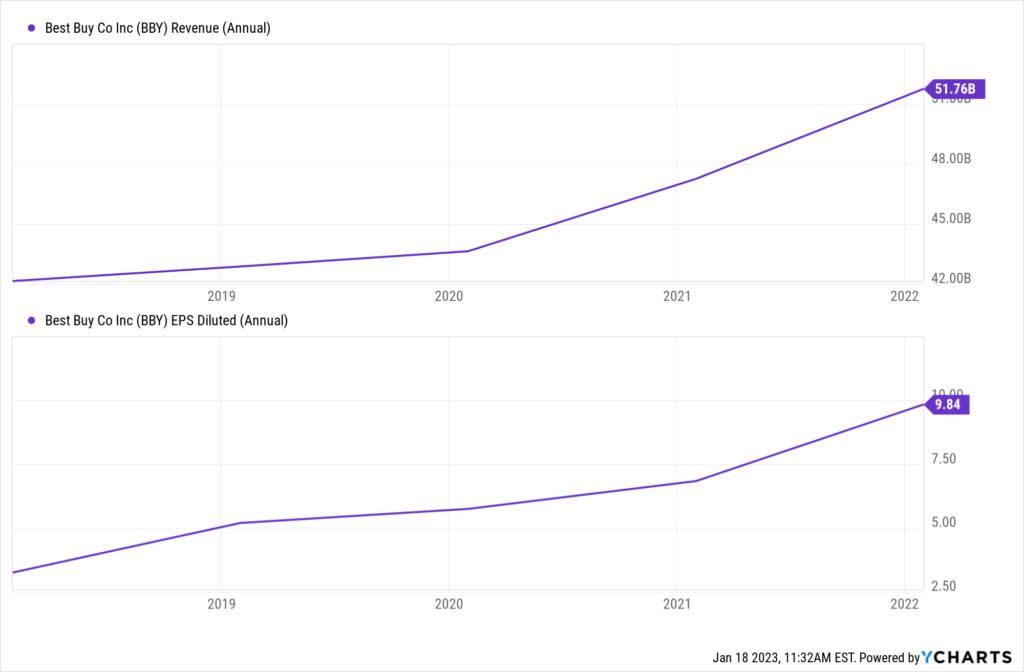 The retailer has increased its dividend for 19 consecutive years. Almost 20 straight years of ever-higher dividend payments. Considering how difficult and competitive retailing has been, that’s impressive. If that doesn’t show how resilient the business is, I’m not sure what will.

The 10-year DGR is 17.8%. Along with that double-digit dividend growth, the stock offers a compelling 4.1% yield. I get it. There’s risk here. It’s not something you bet the farm on. But it seems to me like a 4%+ yield and double-digit dividend growth rate is compensating you for some of that risk. Meantime, the payout ratio of 52.5% reveals a healthy dividend set for more growth.

This stock’s 24% drop from its 52-week high has created a more favorable entry point, in my view. This was a $112.96 stock at its 52-week high. Now? It’s priced at below $86. And buying it 24% cheaper than it was obviously sets you up for better long-term returns from here.

The P/E ratio on this stock is at only 12.8, which is very undemanding. Not that this stock ever really commands a super demanding premium, but its five-year average P/E ratio is 14.4. So we’re below even those modest levels.

We last analyzed and valued the business back in July, estimating intrinsic value at $105.70/share. At the 52-week high, it looked overpriced. But the pendulum has swung very far to the other side, and it now looks underpriced. Low expectations, a 4%+ yield, and double-digit dividend growth? There’s a lot to like here.

The third dividend growth stock we should quickly discuss is Celanese Corporation (CE).

Celanese is a chemical and specialty materials company with a market cap of $13 billion. Celanese flies under the radar. Doesn’t get a lot of love or attention. Or does it? It sure has caught the attention of Warren Buffett’s firm, Berkshire Hathaway (BRK). Berkshire Hathaway initiated a position in Celanese in Q1 2022, which they have since added to.

And we quickly highlighted this in a video back in the summer. I can see why Buffett’s firm likes it. Celanese grows the business like clockwork. It’s been super consistent with revenue and EPS growth. And Buffett has a well-known affinity for growing dividends. Well, Celanese also grows its dividend like clockwork.

The chemical company has increased its dividend for 14 consecutive years. The 10-year DGR of 26.7% is super strong, but there has been quite a bit of deceleration in the dividend growth. For instance, the most recent dividend raise came in at only 2.9%. So that’s a bit disappointing. 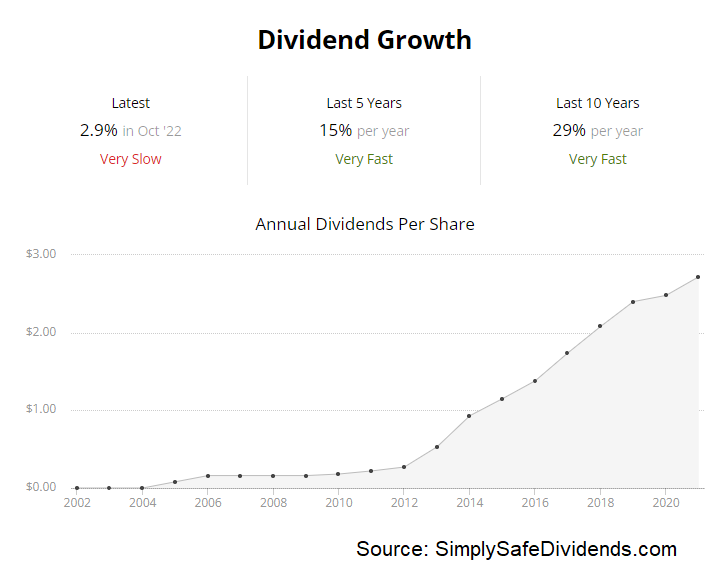 On the other hand, the stock’s yield of 2.3% is 20 basis points higher than its own five-year average. The yield has been rising a bit in order to counterbalance the slowing dividend growth. And the payout ratio is only 18.6%. Celanese is having no issue whatsoever with the dividend. It’s easily affordable.

This Buffett-owned stock has seen its price drop by 30% from its 52-week high. When you look at when Berkshire Hathaway was buying Celanese, the shares are now priced lower than that. So you can get in at a cheaper level than the Oracle of Omaha. That’s exciting. 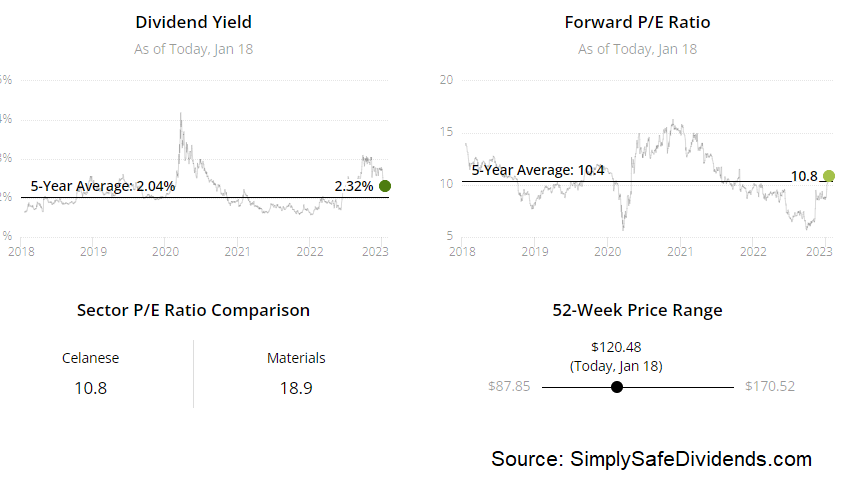 Earnings are higher than usual right now. But every multiple is lower than its respective recent historical average. If we drill down into sales, the P/S ratio of 1.4 is well off of its own five-year average of 2.1. If you like the idea of being invested alongside Warren Buffett, but you want an even better deal than Buffett’s firm got, Celanese is worth a good look.

Fourth up, we’ve have to quickly talk about Kroger (KR). Kroger is an American supermarket chain with a market cap of $32 billion.

Super simple business model here. We’re basically talking about grocery stores. It’s competitive. And the margins are thin. But if a company can do it right, there’s a lot of money to be made here at scale. And Kroger has definitely mastered the scale game.

Annual revenues are well over $100 billion now. And with inflation rising and wallets getting pinched, any potential “trade down” to eating at home, which requires more groceries, bodes well for Kroger. That also bodes well for the dividend, which continues to grow at a high rate.

The supermarket company has increased its dividend for 16 consecutive years. Like I said, the dividend has been growing at a high rate. How high? Well, the 10-year DGR is 14.5%. Think that’s pretty good? It gets better. 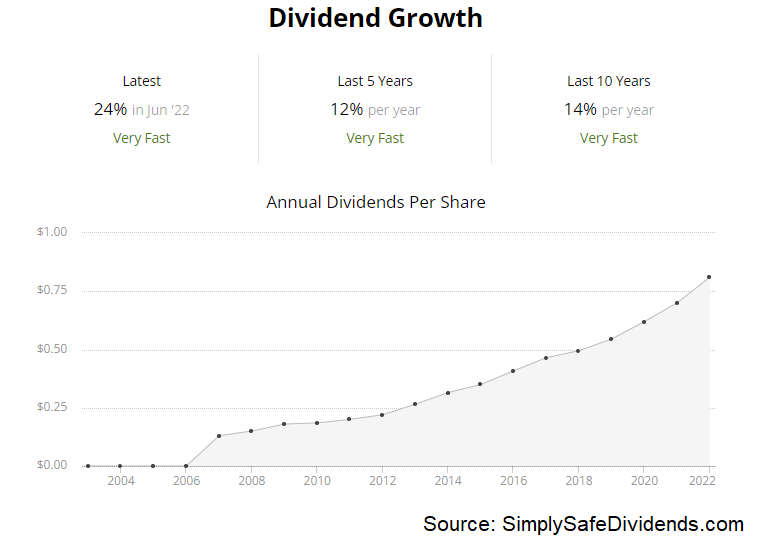 There’s been an acceleration in dividend growth, with the three-year DGR at 15.4%. And the most recent dividend raise came in at a monstrous 23.8%. Also, the stock yields 2.3%, which is 30 basis points higher than its own five-year average. Even after all of the double-digit dividend growth, the payout ratio remains a very low 25.4%, based on full-year adjusted EPS guidance at the midpoint.

This stock’s 28% drop from its recent high has basically brought it back into fairly valued territory.

At the 52-week high of $62.78, the stock looked overpriced. Just way too expensive at that level. Shares are now trading hands for about $45/each, and I think that’s a fair deal. Kroger’s net margin is running below 2%, so you really have to be mindful about valuation with this one. 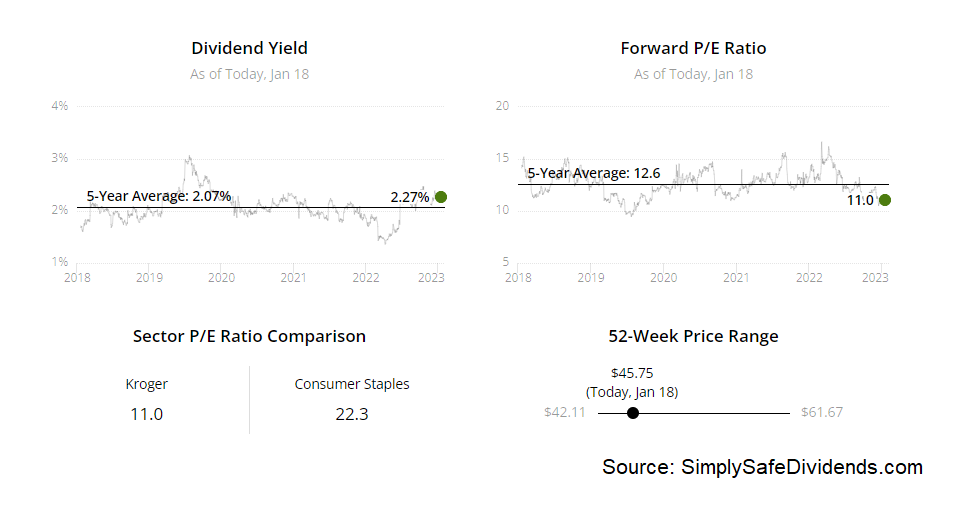 Now, these multiples are undemanding. But with the razor-thin margins, they should be. By the way, Warren Buffett’s Berkshire Hathaway owns a stake in Kroger worth about $2.3 billion. I think now would be a good time to consider joining Buffett on this one.

Last but not least, I want to highlight Tyson Foods (TSN).

Tyson Foods is one of the world’s largest processors and marketers of chicken, beef, and pork with a market cap of $23 billion. You don’t need much of an imagination in order to invest in Tyson Foods. You don’t need to take a giant leap of faith. I mean, this is a company providing food. And we’ve all have to eat.

Moving past the basic necessity of eating, most people want to eat the best food they can get their hands on. That often leads straight to proteins. The proteins that Tyson Foods is providing to the world. Betting on Tyson Foods is, essentially, betting on people’s continued demand for proteins. That’s been a good bet for a long time already, and I think it’ll be a good bet for a long time to come. This easy bet should also lead to plenty of rising dividends.

The food company has increased its dividend for 12 consecutive years. Tyson Foods has balanced dividend metrics that offer something for everyone. Want market-beating yield? Okay. The stock yields 3%. Want inflation-beating dividend growth? Okay. The 10-year DGR is 27.7%, although more recent dividend raises have been quite a bit lower than that. Want a safe payout ratio? Okay. It’s at just 21.5%. It’s tough to complain about any of this.

This stock’s 35% slide from its 52-week high has created what looks like significant undervaluation.

I’ll be honest. Tyson Foods doesn’t necessarily “wow” me in any one area. Instead, it’s just a really good business across the board. But what does “wow” me is the valuation, which has become about as favorable as I’ve ever seen it after the collapse in the stock’s price. 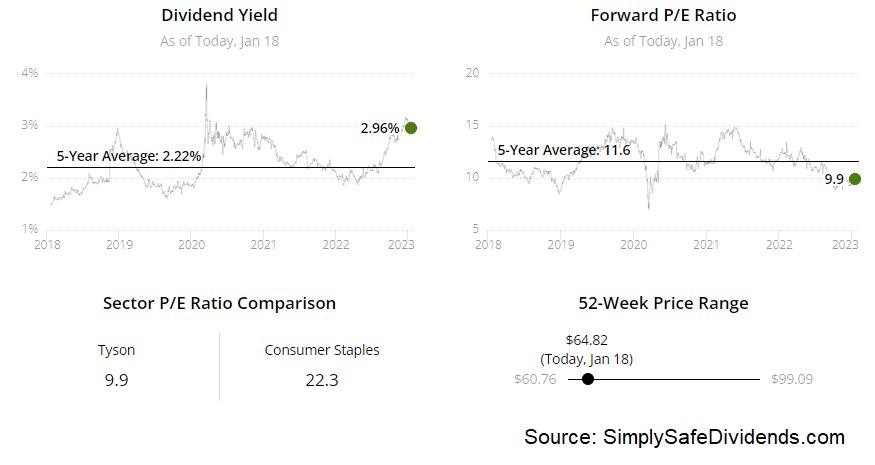 When the stock was priced at its 52-week high of $100.72, that was a hard pass for me. But down here at the $65 area? I think it’s a compelling idea for long-term dividend growth investors. Our recent full analysis and valuation video on the business estimated its intrinsic value at almost $82/share. If you haven’t already, give Tyson Foods a good look here.

P.S. Would you like to see my entire stock portfolio — the portfolio that’s generating enough safe and growing passive dividend income to fund my financial freedom? Want to get an alert every time I make a new stock purchase or sale? Get EXCLUSIVE access here.