The S&P 500 index is the widely followed benchmark on Wall Street because it hosts 500 of the largest companies listed in the U.S. that operate in a diverse variety of industries. It had a rough 2022, declining by 19.4% and ending the year in bear territory.

But consecutive down years are relatively rare. Going back to 1926, the S&P 500 has only declined two (or more) years in a row on four occasions, and each instance was triggered by a significant economic or political shock.

In the absence of any major negative event this year, there’s a good chance the index will rebound to deliver a positive return for investors. Based on almost a century’s worth of data, the S&P 500 has soared by an average of 25.9% in the first positive year following a loss. That’s an indication of what could be in store for 2023, though investors will have to navigate some economic headwinds like high inflation and rising interest rates before that return becomes a reality.

With 2023 just getting started, here’s why Advanced Micro Devices (AMD) might be one of the best stocks to own if history repeats.

AMD has some of the world’s biggest brands in its corner
“Semiconductor” is the broad commercial term used to describe the advanced computer chips sitting inside all of our favorite electronics, and AMD is one of the best producers in the industry.

Its chips power both of the world’s top game consoles, such as Sony‘s PlayStation 5 and Microsoft‘s Xbox, and they’re a staple among PC gamers. They also power the infotainment systems in Tesla‘s line of electric vehicles, which support functionality like gaming, web browsing, and video streaming, in addition to controlling the cars’ core features like air conditioning.

But consumers have pulled back their spending on big-ticket items over the last 12 months, which has hurt sales of the abovementioned products. As a result, growth in AMD’s gaming segment revenue slowed recently, and its client segment revenue — which accounts for chips used in notebook and desktop PCs — sank 40% in the recent third quarter of 2022 (ended Sept. 30).

The data center continues to shine and is set to get even better
There is a silver lining in AMD’s recent results: Its data center revenue continues to soar. The company supplies chips to all the top providers of cloud services, from Microsoft Azure to Amazon Web Services, and that industry remains strong because businesses continue to invest in their digital transformations.

While that strength should carry into 2023, AMD’s long-term potential is even more attractive thanks to its $49 billion acquisition of Xilinx last year.

Xilinx is a global leader in adaptive computing, which AMD management believes is the next frontier in semiconductor technology. It describes chips that can adjust to the user’s needs in real time. Typically, in order to upgrade semiconductor hardware, the end user has to wait for the next generation chip and then swap out the old version for the new one. Adaptive hardware can be upgraded even after the manufacturing process is complete, which means a much shorter upgrade cycle.

That has significant implications for a technology like artificial intelligence, because it’s advancing at such a rapid pace that chip hardware is struggling to keep up. Since data centers have become training grounds for AI and machine learning models, adaptive tech could be a major driver of AMD’s revenue in the future.

AMD stock might be a bargain right now
With parts of AMD’s business struggling on the back of weak consumer spending, combined with the broader sell-off in the technology sector, the company’s stock declined by 54% from its all-time high. It presents investors with a unique opportunity to buy into a long-term growth story at a steep discount. 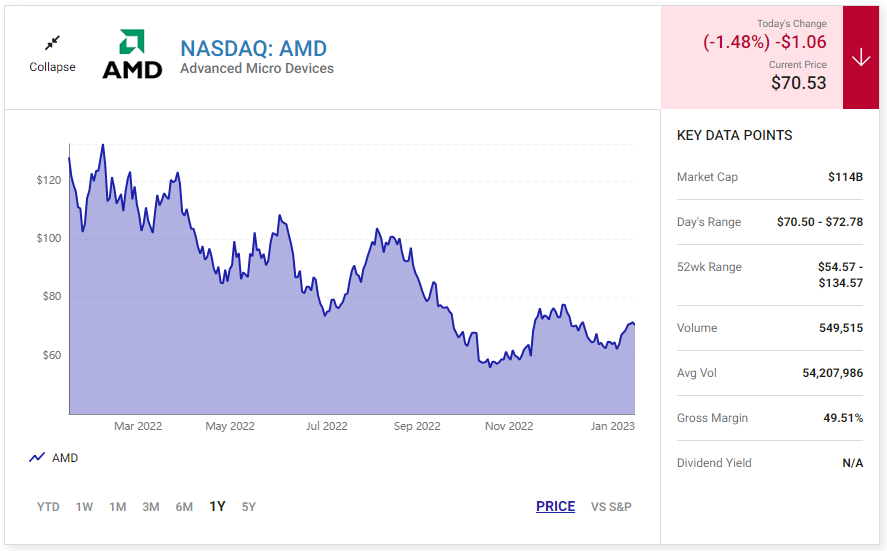 Despite AMD’s woes, its final 2022 revenue is expected to come in at $23.5 billion, which represents a whopping 43% growth rate compared to 2021. Analysts expect that growth to slow to just 5% in 2023, but there’s also a consensus among economists that the U.S. could fall into recession during the year. If that doesn’t happen, AMD could blow that revenue estimate out of the water.

In any case, AMD stock trades at a price-to-sales multiple of just 4.9 right now, which is its cheapest level since 2019. If the S&P 500 does bounce back this year, that multiple could expand as investors’ appetite for risk comes back, which would point to upside for the stock.

The semiconductor industry is expected to grow to a $1.5 trillion annual opportunity by 2030, so even if 2023 is a slow year for AMD, this might still be a great entry point for investors with a long-term time horizon.