What can I say? I love dividends.

Dividends are the best and most passive form of income I’ve ever come across. Most income sources require you to work for them. But not dividends. To get paid a dividend, you simply have to own shares in a company paying it.

It’s really that simple. And this dividend income could keep coming in for years… even decades of your life.

Not only that. Many of the world’s best businesses are increasing their dividends, year in and year out, like clockwork. So what are we talking about here?

We’re talking about getting paid ever-more money without lifting a finger. Like Warren Buffett said: “If you don’t find a way to make money while you sleep, you will work until you die.”

The only problem with that quote? Inflation.

Expenses keep going up, which means your income must keep growing in order to keep pace. Growing dividends solve this problem.

Today, I want to tell you about 6 dividend growth stocks that just increased their dividends.

The first dividend increase I want to highlight today is the one that came in from Abbott Laboratories (ABT).

Abbott Laboratories just increased its dividend by 8.5%. Gotta love it. Inflation in the US is running at somewhere around 7%, and it’s coming down. Meanwhile, Abbott Laboratories gives their shareholders an inflation-busting 8.5% bump in their dividend income, keeping their purchasing power ahead of the game. Awesome.

This is the 10th consecutive year in which the healthcare conglomerate has increased its dividend. Although it’s only been a decade of dividend raises for the business in its current form, Abbott Laboratories is actually a Dividend Aristocrat. And that’s because the company had been a consistent dividend increaser for many decades prior to spinning off its pharmaceutical arm, AbbVie (ABBV).

Nonetheless, Abbott Laboratories has great dividend metrics. The five-year DGR is 12%, which you can pair with the stock’s current yield of 1.9%. With the payout ratio at only 39.2%, based on adjusted EPS guidance for this fiscal year, we’ve got got a healthy dividend poised for much more growth. 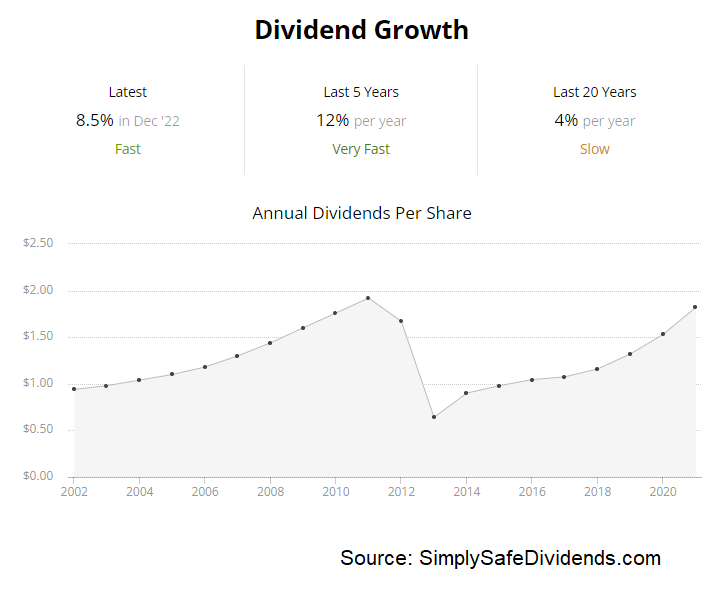 This is one of my favorite Dividend Aristocrats. And I think it’s moderately buyable.  Is it a back-up-the-truck opportunity? No. I don’t think so. But the stock fell by about 20% in 2022, and this drop in pricing has created a more acceptable valuation.

To be honest, I rarely find this name to be buyable. But I think it’s a reasonable idea right now. The forward P/E ratio, based on that aforementioned guidance, is 21.1. Not super low. But also not terribly high. The P/CF ratio, at 18.8, is decently below its own five-year average of 23. I think it’s worth considering slowly scaling into Abbott Laboratories, especially after the 8.5% dividend increase and 20% drop in pricing. Take a look at it.

Next up, let’s quickly discuss the dividend increase that was announced by Amgen (AMGN).

Amgen just increased its dividend by 9.8%. Bam. Another great business doing great-business things. Amgen has been so reliable and so consistent for so many years. It’s really remarkable. Shareholders must be very pleased by the way in which management continues to reward them with ever-higher dividends.

The biopharmaceutical company has increased its dividend for 12 consecutive years. Not the longest dividend growth track record out there. But Amgen’s consistency is what catches my eye. The five-year DGR is 11.3%. The three-year DGR is 10.2%. And then we have this near-10% dividend raise. 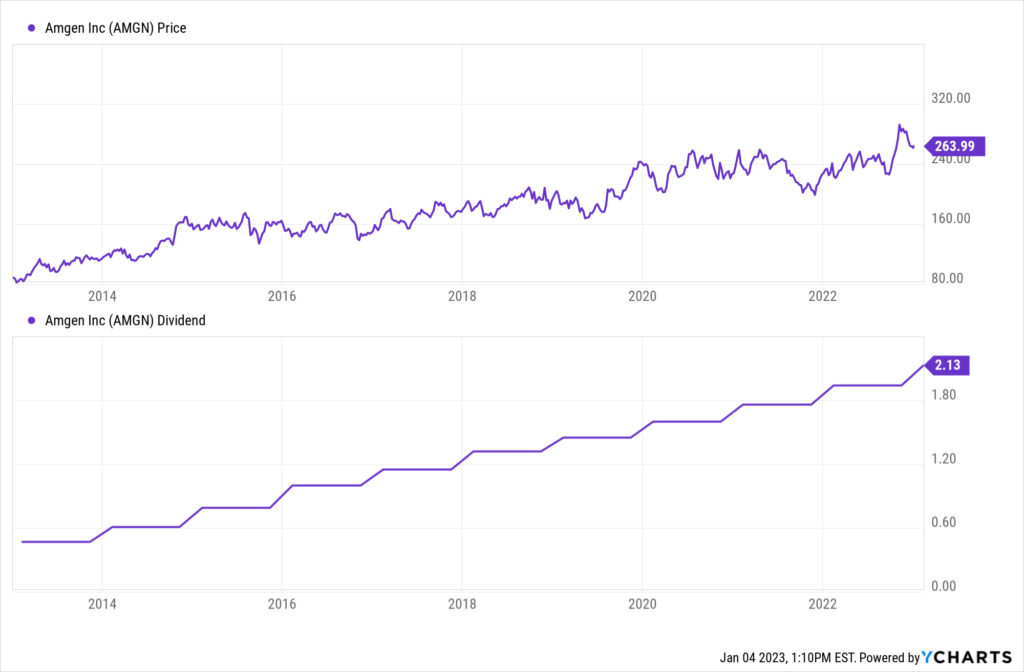 A slight deceleration. Overall, though, we can see that Amgen is raising that dividend by a high-single-digit to low-double-digit rate each year. With the stock yielding 3.2%, that’s really more than enough dividend growth to make sense of things. Since the payout ratio is 48.5%, based on adjusted EPS guidance for this fiscal year, I suspect that Amgen will keep doing what it’s been doing with the dividend.

This stock has gone on a run, but a pullback could be a great chance to jump on it. Amgen’s stock rose by about 16% in 2022. That’s incredible performance. I mean, the S&P 500 was down by almost 20% last year. While that might be nice for current shareholders who are content to hold what they’ve got, what about those who are looking to buy more or get in for the first time?

Well, as is the case with Abbott Laboratories, I think Amgen is a reasonable idea. It’s not as attractive as it was a year ago. But I don’t see anything here to indicate a nosebleed valuation. We’ve got a P/E ratio of 21, which is actually quite a bit below its own five-year average of 26.

On the other hand, the P/CF ratio of 14.6 is noticeably higher than its own five-year average of 13.3. I’d like to see it cheaper. But I wouldn’t be opposed to slowly stepping in and getting more aggressive on any drops. Keep an eye on Amgen.

I now want to bring to your attention the dividend increase that came courtesy of American Tower (AMT). 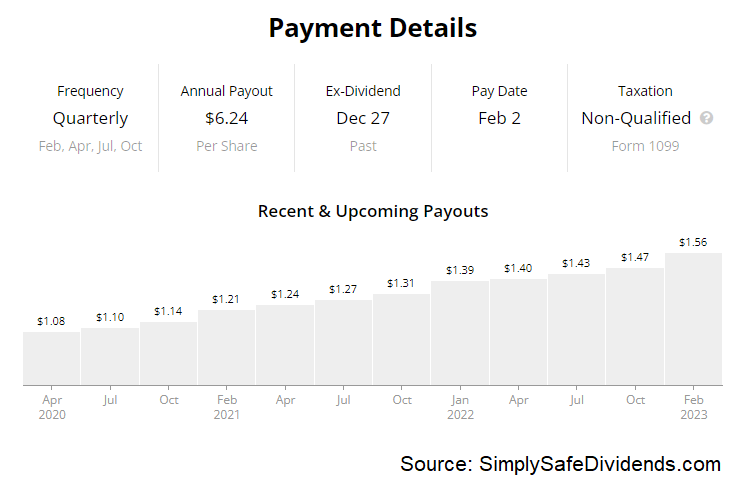 The 10-year DGR of 20.4% is very impressive, although more recent YOY dividend growth rates have been in the low-double-digits. But with the stock yielding 3%, which is 110 basis points higher than its own five-year average, I’d say you’re being compensated for the slowing dividend growth. 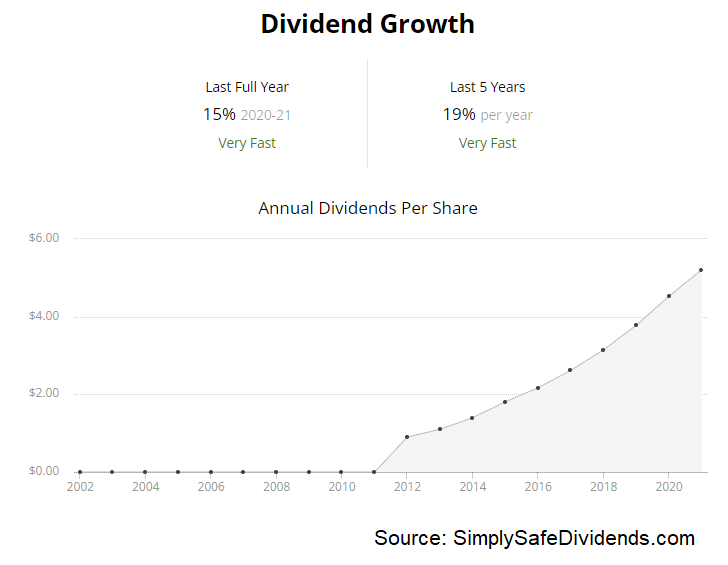 Meantime, American Tower’s payout ratio is 64.7%, based on midpoint adjusted funds from operations per share guidance for this fiscal year, which is actually a pretty healthy payout ratio for a REIT.

This REIT is, arguably, a much better way to invest in the telecom space than telecoms. Whereas the carriers have loaded up on debt and seen their shares perform miserably, this stock is up by about 175% over the last decade. And that’s even after falling nearly 30% from its 52-week high!

This REIT is running circles around the big telecom players, all while collecting rent from them. Not only that, but once a tower goes up, it’s very easy to scale it and collect more rent from the same tower. Pretty sweet setup, if you ask me. The valuation does look reasonable here. The forward P/AFFO ratio is sitting at right about 22. For a REIT that has been growing this quickly, I don’t find that to be a hard pill to swallow. After the 30% drop in pricing, American Tower looks very interesting.

The fourth dividend increase I want to go over today is the one that was announced by Broadcom (AVGO).

Broadcom just increased its dividend by 12.2%. Yet another inflation-busting dividend increase from a wonderful business. Expenses are going up. We all know that. If your income can’t keep up, that’s a problem. But if your income is growing faster than inflation, especially if this income is totally passive, you’re a happy camper.

This marks the 14th consecutive year of dividend increases for the semiconductor and infrastructure software company. In some ways, Broadcom is a dream dividend growth stock. Now, the dividend growth rate has clearly slowed. The 10-year DGR of 40.2% is amazing, but those heady days are likely over. 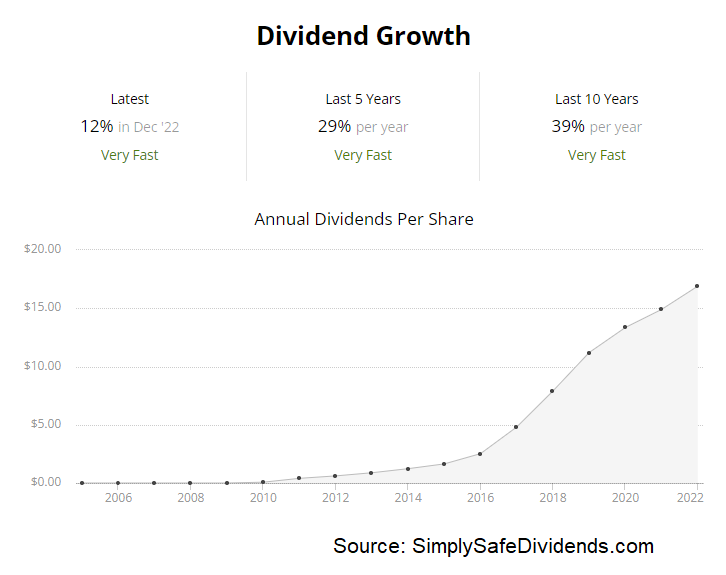 Still, 12% dividend raises are enough to keep the needle moving, especially when you pair that with the stock’s market-beating yield of 3.3%. And with a payout ratio of 48.9%, based on full FY 2022 adjusted EPS, Broadcom has the leeway necessary to continue increasing the dividend at a nice clip.

In my opinion, this is one of the best opportunities in all of tech for long-term dividend growth investors.

Broadcom is a wonderful business being run by a very skillful CEO. Shareholders continue to be richly rewarded with dividend increases and capital gains, all while the business gets bigger and better. It’s hard to complain about anything here with Broadcom, except, perhaps, the debt load.

We recently put out a full analysis and valuation video on Broadcom not long ago, estimating fair value for the entire business at nearly $600/share. Shares are currently selling for about $560/each. If you’re in the market for more tech exposure, you have to at least consider Broadcom.

I now want to bring to your attention the dividend increase that was announced by Mid-America Apartment Communities (MAA). 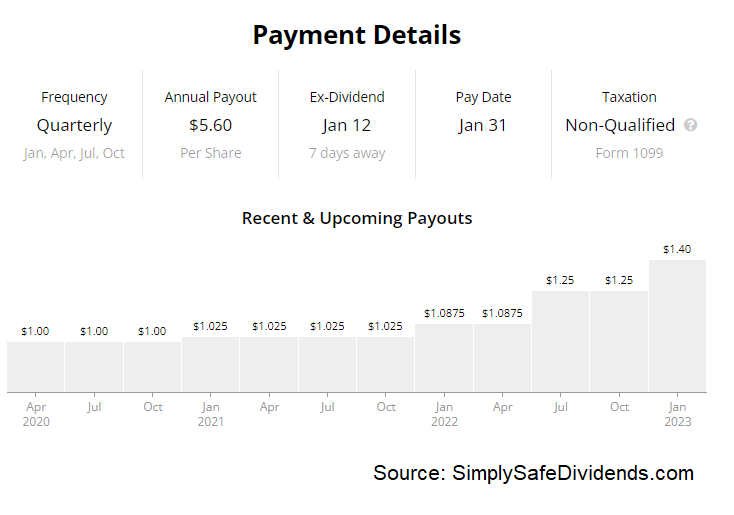 The apartment community real estate investment trust has increased its dividend for 13 consecutive years. Of course, the dividend is already bigger heading into 2023, so we’re almost guaranteed to move that record up to 14 years. The REIT’s 10-year DGR is 5.5%.

We’ve obviously seen a very nice acceleration in dividend growth of late, propelled by rapidly rising rental rates across the Sunbelt markets in which the REIT owns and operates its apartment communities. The stock’s yield of 3.6% pairs very nicely with this kind of dividend growth. And the payout ratio, even after the two big dividend raises this year, is 66.3%. That’s based on FY 2022 guidance for core funds from operations per share at the midpoint.

The basic need for housing makes this a compelling idea. And I see the stock as a fair deal. The multiples for this name are neither terribly high nor shockingly low. I’ll give you a great example. The P/CF ratio is 18.3. And you’re going to value a REIT based on cash flow, or funds from operations. 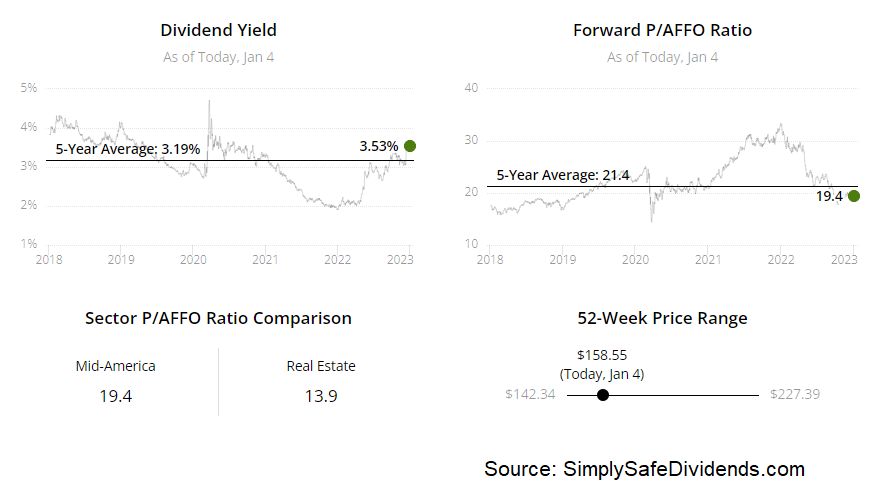 That’s a decent multiple. To compare, its five-year average is 19.9. A current discount relative to that average, but this average has been artificially skewed by the stock really going nuts during 2021. Indeed, the stock’s pricing has dropped by more than 30% from its 52-week high. It just wasn’t a good idea to buy it up there. But I think it’s definitely worth considering now.

Last but certainly not least, let’s now go over the dividend increase that came by way of WEC Energy Group (WEC). 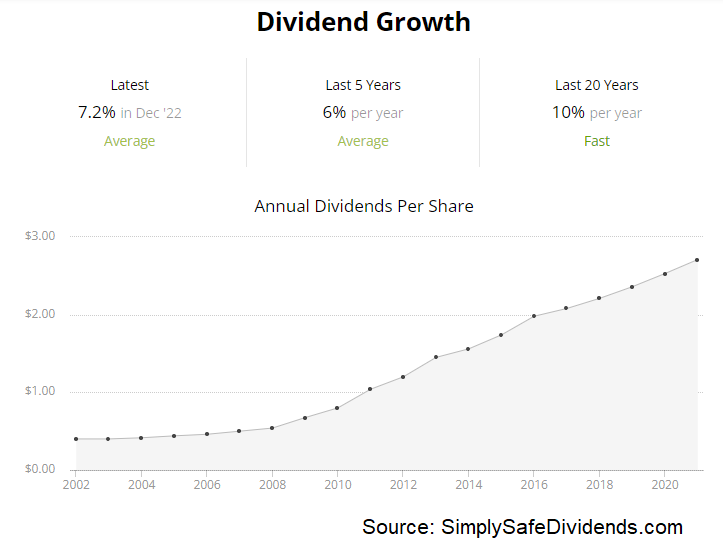 This utility has been pumping out serious growth alongside energy. Meantime, you also get a solid, market-beating 3.3% yield here. The payout ratio is 71.1%, based on midpoint guidance for FY 2022 EPS. A touch high. But not dangerous. As such, I’d expect continued dividend growth in the 7% range.

This stock doesn’t look cheap. But, honestly, it never looks cheap. I’ve owned shares in this utility company for six years. And guess what? All I’ve been hearing over that time is how expensive the stock is. It looked expensive back when I bought.

Yet a lot of the cheaper utility stocks have been total dogs over the same time frame. Look, you tend to get what you pay for, and this high-quality utility deserves, and gets, a premium. The P/E ratio of 21.5 is slightly lower than its own five-year average of 22.6. Like I said, premium. But it’s outperformed anyway, despite the premium valuation. And I think there’s a good chance that it continues to outperform.