Naturally, as with everything else that I’m buying, I prefer when those stocks are cheaper, not more expensive.

All else equal, price and yield are inversely correlated. So lower prices result in higher yields, which piles up my dividend income that much faster. That’s why you must strike when volatility takes hold and sends stocks lower.

I always see short-term volatility as a long-term opportunity. That perspective helped me to go from below broke at age 27 to financially free at 33. By the way, I explain exactly how I achieved financial freedom in just six years in my Early Retirement Blueprint.

All that said, it’s a big market, and some ideas are better than others. Focusing on the very best long-term ideas right now is what this article is all about.

Today, I want to tell you My Top 5 Dividend Growth Stocks for January 2023.

Corning is a multinational materials science company. This is such an under-the-radar company. Despite the lack of attention, it’s at the forefront of various technologies. Not only that, but its products are both critical and integral.

How about optical fiber for internet access, glass for smartphones, and specialty materials for advanced R&D processes? A lot of the tech we all love and use every single day doesn’t really work without Corning’s products. Now, Corning won’t knock you dead with its growth. Instead, it just steadily advances. Revenue has grown at a compound annual rate of 6.5% over the last decade, while EPS has compounded at an annual rate of 7.4% over that period.

Steady business growth is what’s fueled steady dividend growth. Corning has increased its dividend for 12 consecutive years. The 10-year dividend growth rate of 13.4% does outpace EPS growth by quite a bit. 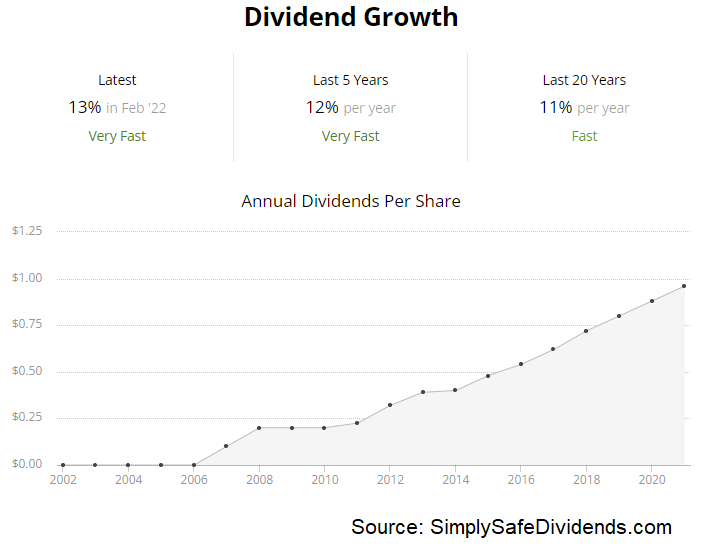 However, Corning is expected to produce much more bottom-line growth over the next few years, which is what could allow the company to continue with its double-digit dividend growth pattern. You get a 3.4% yield to go along with that. And this yield, by the way, is 80 basis points higher than its own five-year average. With what is basically a “perfect” payout ratio of 50.2%, Corning deftly balances dividends with retaining earnings. Good stuff.

I think this name is materially undervalued right now. Even in a depressed market, this stock’s P/E ratio of 14.8 is noticeably low. Does it deserve a super high earnings multiple? Should it command a P/E ratio of 30? No. But that’s not where we’re at.

We’re in very undemanding territory here. Our recent analysis and valuation video on the business shows why Corning could be worth $39.51/share. This looks like an above-average business, with an above-average yield, being sold for a below-average valuation. It should definitely be on any dividend growth investor’s radar.

Ingredion is a leading worldwide ingredients solutions provider. So what does this company do? Well, Ingredion turns raw materials like grains, fruits, and vegetables into value-added ingredients and biomaterials for various industries.

It also provides products for the animal feed and corn oil markets. Some examples of their products include industrial starches, high-fructose corn syrup, dextrose, and refined corn oil. Maybe that sounds complicated, but it’s really not.

Simply put, Ingredion is supplying the world with simple, yet critical, ingredients. And the company is making a lot of money by doing so. More and more money, in fact. Now, the CAGR of 0.7% for revenue and 2.2% for EPS, respectively, over the last decade isn’t super impressive, but it’s more of a time frame issue than a business issue. To that point, Ingredion is expected to compound its EPS at a 10% annual rate over the next three years. 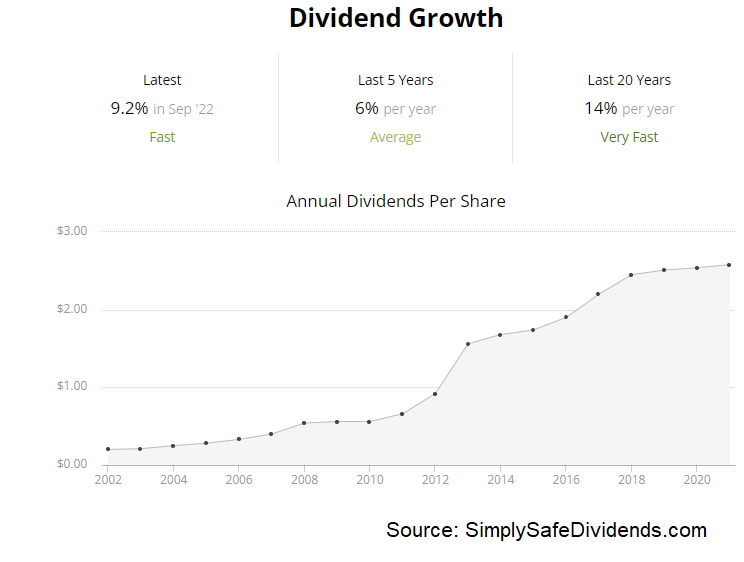 An acceleration in bottom-line growth supports continued dividend growth. Already, the dividend, which has been increased for 12 consecutive years, sports a 10-year DGR of 15.8%. So you can see how dedicated Ingredion has been to rewarding shareholders with large dividend raises, despite the fact that EPS growth has not always been enough for it.

With EPS growth expected to accelerate back into a double-digit range, shareholders likely have many more sizable dividend raises to look forward to. That belief is partially based on the fact that the payout ratio is only 39.3%, based on midpoint guidance for this fiscal year’s adjusted EPS. Meantime, you’re getting a nice 2.9% yield to start with.

This dividend growth stock could be just the ingredient your portfolio needs. I say that because this ingredients company looks undervalued based on just about every metric you can possibly look at. A great example of that? The P/E ratio of 14.9.

That’s a nice combination for explosive upside potential. We put out a full analysis and valuation video on Ingredion only weeks ago, showing why shares have an estimated intrinsic value of $118.37/each. With the stock currently priced below $100, I’d argue that we’ve got a good deal here. Don’t forget about Ingredion.

Medtronic is a global developer and manufacturer of medical devices for chronic diseases. This is a world-class business in a part of the economy experiencing secular growth. And because medical devices aren’t something you’re going to negotiate over when a surgery is necessary, Medtronic benefits from constant demand, rising demand, and inelastic demand.

That’s an amazing trifecta. In spite of it all, this stock has been in the doldrums recently. What gives? Well, the company has been dealing with both supply shocks and demand shocks. The global supply chain has limited its ability to bring new product to market. At the same time, the pandemic has put elective surgeries on hold. 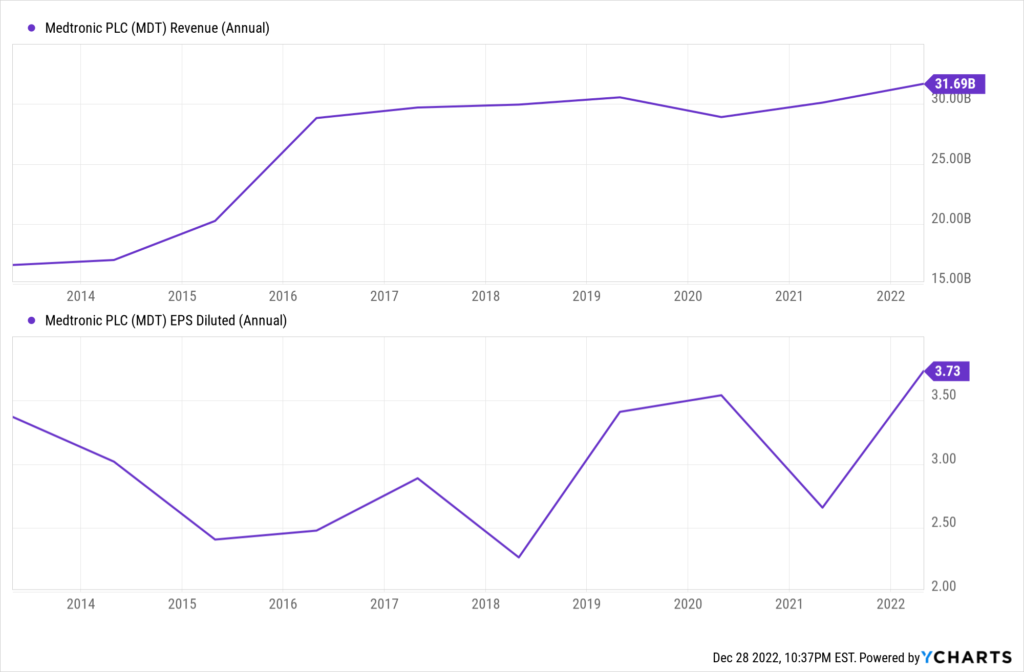 Medtronic also continues to reliably grow its dividend through thick and thin. Indeed, Medtronic has increased its dividend for 45 consecutive years. That’s longer than I’ve been alive for. And I’m no spring chicken anymore.

The 10-year DGR of 10.3% pairs very nicely with the stock’s current yield of 3.5%. Medtronic’s payout ratio of 51.6%, based on midpoint guidance for this fiscal year’s adjusted EPS, gives them plenty of leeway in terms of paying and raising that dividend. This is a vaunted Dividend Aristocrat that’s clearly proven its commitment to the dividend.

This might be one of the best deals in the entire market. Medtronic is almost never this cheap. I’ve been investing for more than a decade now, and I’ve never seen it like this.

Take the P/CF ratio, for instance. It’s sitting at 16.5. Its five-year average? 21.4. That is a crazy spread. Also, that aforementioned 3.5% yield? Yeah, that’s 130 basis points higher than its own five-year average. Medtronic is starting to flirt with high-yield territory, which is unheard of for this Dividend Aristocrat.

Our recent full analysis and valuation video on Medtronic, which went live only days ago, made a compelling case as to why the business could be worth almost $111/share. The stock is currently priced at $77.50. This is a great business being thrown in the bargain bin. Consider grabbing cheap shares while you still can.

Not only do they offer so much but they excel at all of it (no pun intended). That’s why the company’s market cap is sitting at $1.8 trillion. You don’t get to that kind of size and make that kind of money without doing many, many, many things extremely well. Speaking of money, revenue has compounded at an annual rate of 11% over the last decade, while EPS has a CAGR of 15.8% over that period.

Either way, hard to complain about that kind of dividend growth. However, the stock’s yield, which is 1.1%, does leave some room for complaining. But this is really more of a compounder than an income play. And with the payout ratio at only 29.3%, I see this dividend compounding at a high rate for a long time to come.

This is one of the highest-quality dividend growth stocks in the world. And now could be one of the rare times in which it’s buyable. 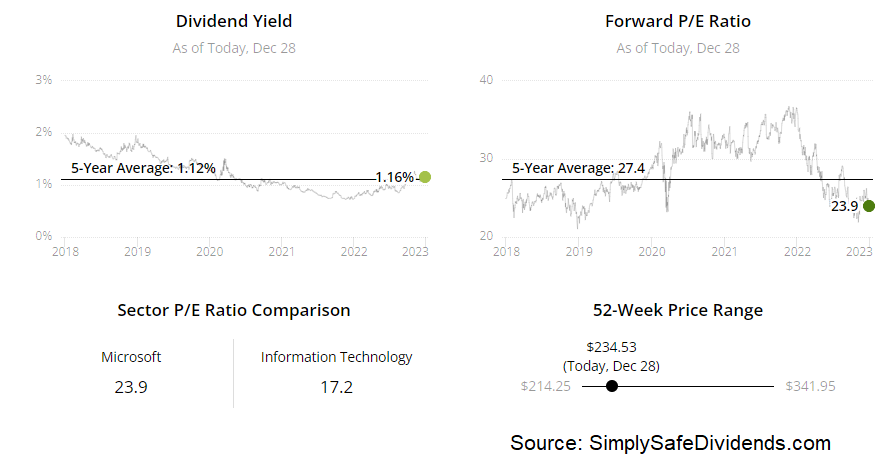 I rarely include Microsoft in a list like this, only because it rarely looks buyable. But I think it’s in one such rare buyable zone right now. We have disconnects in the valuation metrics across the board, with almost every single basic metric lower than its respective recent historical average.

The P/E ratio of 25.7 is a great example of this disconnect, with that being well off of its own five-year average of 36.9. Yeah, that’s a high five-year average. Like I said, Microsoft rarely looks buyable. But it does now, for the first time in a long time. We’ll have a full analysis and valuation video coming out soon on Microsoft, so keep an eye out for that.

Meantime, if you don’t already have as much Microsoft stock as you’d like to have, consider upping that exposure here with shares trading for less than $240/each.

Tyson Foods is one of the world’s largest processors and marketers of chicken, beef, and pork. Tough to go wrong with Tyson Foods over the long run, guys.

After all, betting on Tyson Foods is akin to betting on the continued and rising demand for meat among human beings. And since we’ve all gotta eat, it’s not too much of a stretch to make that bet. The world’s population is growing, which means more mouths to feed. And we’re also becoming wealthier, on average, which means more demand for proteins.

Some people don’t like to eat meat, and that’s fine. But nobody hates dividends. Tyson Foods has raised its dividend for 12 consecutive years. The 10-year DGR is an astounding 27.7%, but more recent dividend raises have been in the mid-single-digit range. 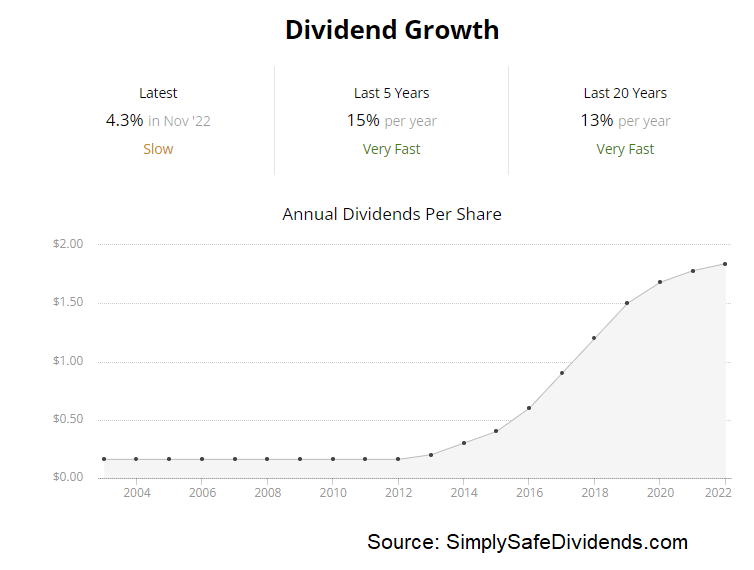 However, the stock’s yield of 3.1% compensates you for that slowing dividend growth, in my opinion. Plus, the payout ratio is a super low 21.5%. That gives Tyson Foods the kind of room they need to continue increasing the dividend in a challenging near-term environment where margins are expected to compress.

Honestly, Tyson isn’t my favorite business, but this valuation makes me like it a lot more than I usually do.  This stock looks cheap from just about every angle. The P/E ratio is below 7. Yes, below 7. I’ve gotten the memo about a near-term decrease in earnings. But the market has priced in a pretty severe decline in profitability already.

Too much, I’d argue. We will soon put out a video going over operations and the valuation, showing why this business has an estimated fair value of $81.83/share. In fact, that video may already be live by the time you’re reading this. As I write this, Tyson Food’s shares are trading hands for about $61/piece. Very good business. Great valuation. Make sure it’s on your radar.