China’s over-the-top COVID lockdowns are setting up a surprising “all-American” dividend opportunity for us contrarians.

And Apple (AAPL) has likely lost out on six million high-margin iPhone 14 Pros as protests shut down a factory in Zhengzhou run by key supplier Foxconn. The stock responded instantly:

Apple: Still a Little Too Multinational for Wall Street 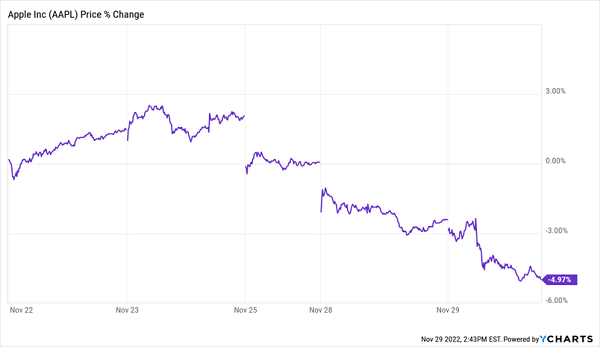 How, you may wonder, is all this bad news setting up a dividend opportunity for us?

For that part of the story, we need to look right here in the US, where we’re suddenly talking about the “Silicon Heartland” instead of the “Rust Belt.” Intel (INTC) broke ground on a semiconductor plant in Ohio in September. Micron Technology (MU) followed that up in October, announcing a $100-billion chip facility in New York.

(I probably don’t have to tell you that up until recently, making chips in the US was virtually unheard of.)

It’s the boom no one is talking about as inflation and recession fears dominate the headlines. But make no mistake: the “onshoring” megatrend is real. And it’s likely to be the story of 2023.

Think of it as the “Manufacturing ‘Gold Rush’ of 2023.” But like the California Gold Rush 170 years ago, it will be those who supply the “prospectors” with food and gear who make the most money. In this case, the “prospectors” are the companies building the plants and the workers who land jobs in them.

Such companies are typically called “pick-and-shovel” plays. A good example is Caterpillar (CAT), which we named as a top “onshoring” buy back on April 5—and it’s steamrolled higher since, returning 11% while the rest of the market tanked.

CAT Rolls Over the 2022 Market Mess 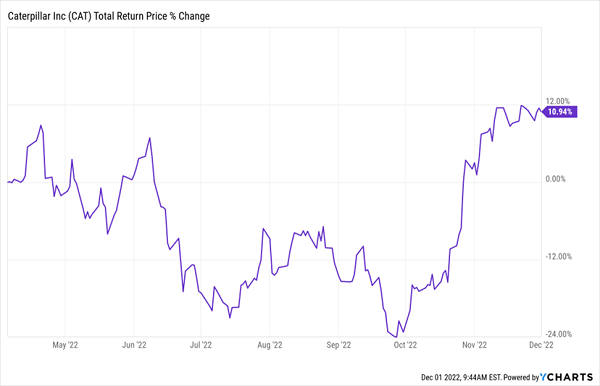 The 97-year-old company is American through and through, having expanded its manufacturing presence in the US over the last decade, with new plants in Georgia and an expansion of its plant in West Fargo, North Dakota. It also supplies the gear needed to break ground and build up those new American plants.

Let’s take a second to tip our hat to co-founder Ben Holt’s “Caterpillar,” which he invented by replacing the wheels on his tractor design with treads in 1904, so the machines could traverse muddy fields: 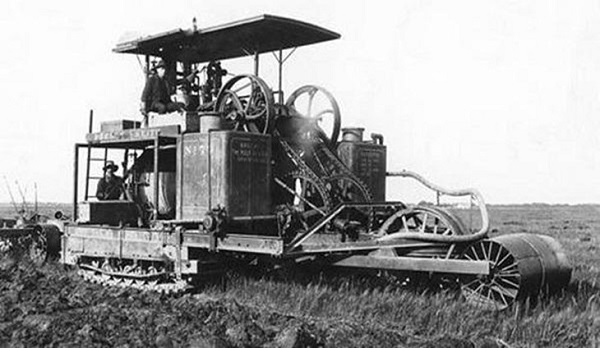 Caterpillar’s dividend is almost as old as the company itself: the payout started rolling out to investors in 1933 (in the depths of the Great Depression, no less), and CAT has hiked it every year for the last 28, earning itself a spot on the Dividend Aristocrats list.

The company also shows our Dividend Magnet philosophy—the tendency of a stock’s price to track its payout higher—in action. 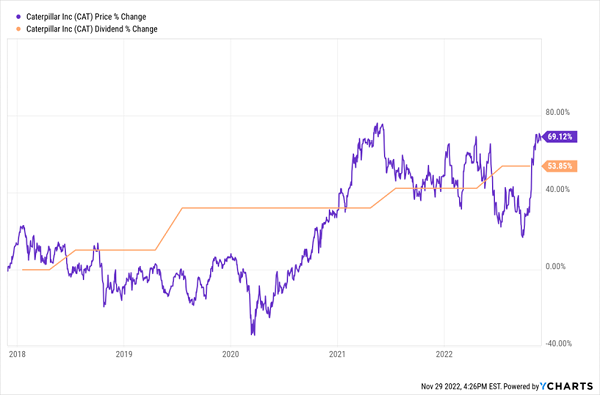 The pattern above is unmistakable: the stock always closes the gap with the rising payout. You’ll also note that any time the price surpassed the payout was a good opportunity to take profits. We’re in one of those times now, but another chance will almost certainly come our way soon.

By the way, not every pick-and-shovel play needs to be so, um, literal. Some, like Casey’s General Stores (CASY), which we covered in our September 20 article, tick away in the background—in this case selling food and fuel through a 2,400-strong convenience-store chain.

We love Casey’s because it operates right where most of these new plants are going, in states like Ohio, Michigan, Indiana, Kentucky and Tennessee.

That’s an overlooked edge that will drive Casey’s sales, free cash flow and dividends for years to come. Heck, the stock has already popped nicely since our article, rising 10.2% as of this writing: 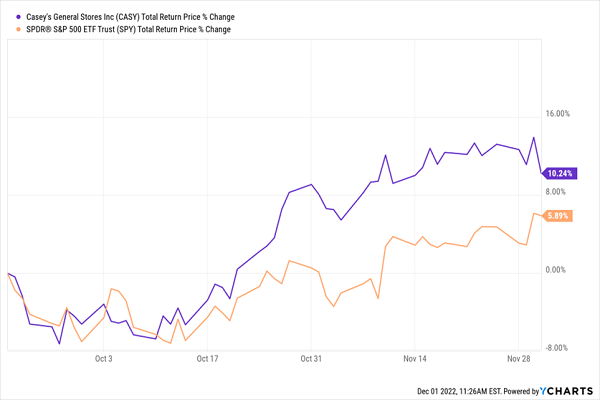 The company has some other dividend stats that are very appealing indeed:

We love stocks with hidden value and momentum like Casey’s, simply because those companies tend to stay strong over time. And management has tons of options for unlocking that hidden value, like a big dividend hike, a special dividend, or even a smartly timed spinoff or acquisition.

Yours in a dividend-powered retirement,

My team and I have uncovered 7 other stocks that, according to my latest research, are poised to deliver 15% total returns per year—even as we stumble towards a recession in 2023.

As you can see below, that’s enough to double your money every 5 years! 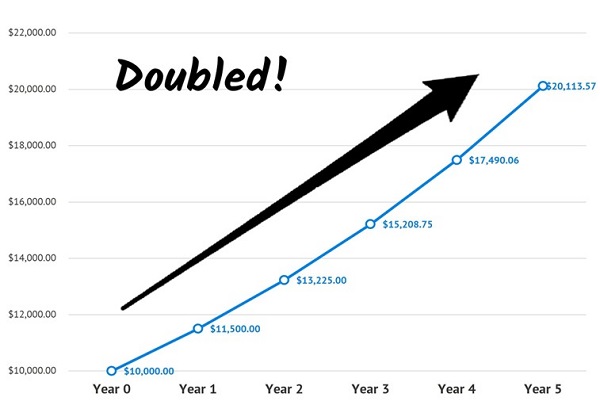 These 7 companies all have one thing in common: explosive dividend growth that’s powering their share prices higher.

These “Dividend Magnets” are why I can predict these 7 stocks’ 15% yearly gains. Because if they’ve got the power to raise their payouts 15% a year (and these 7 companies easily do!), we can expect their share prices to follow suit, just like we saw with Caterpillar above.

Click here and I’ll share my full dividend-growth strategy and the names, tickers and all the particulars on these seven stout 15% yearly payers.