There’s a very good reason everyone from Wall Street professionals to retail investors closely eye billionaire Warren Buffett’s buying and selling activity. Since he took over as Berkshire Hathaway (BRK.A) (BRK.B) CEO in 1965, he’s outpaced the aggregate return of the S&P 500, including dividends paid, by a factor of 120! While not infallible, the Oracle of Omaha has demonstrated a penchant for running circles around the broad market indexes.

Thankfully, tracking Warren Buffett’s money moves is relatively easy to do. Money managers and wealthy individuals with at least $100 million in assets under management are required to file Form 13F with the Securities and Exchange Commission no later than 45 days following the end of a quarter. A 13F allows investors to see what the most-successful investors on Wall Street bought and sold in the latest quarter.

Warren Buffett has spent $54 billion, combined, buying Apple and Chevron stock
According to 13F aggregator WhaleWisdom.com, Berkshire Hathaway has purchased more than 894 million shares of Apple at an estimated average price of $37.17 since the beginning of 2016. This works out to a cost basis of approximately $33.26 billion.

The Oracle of Omaha’s confidence in Apple is a reflection of the company’s superior branding, innovation, and capital-return program. In terms of the former, Apple is typically viewed as one of the most-valuable brands in the world, with an incredibly loyal customer base.

But what’s been really special about Apple is how innovation has driven its sales and profits higher for more than a decade. The iPhone accounts for more than half of all U.S. smartphone market share, and the company’s burgeoning subscription services segment has managed to buck economic uncertainty and deliver sustained double-digit year-over-year sales growth. Subscription services will play a key role in minimizing the revenue ebbs-and-flows that accompany iPhone replacement cycles.

There’s also Apple’s amazing capital-return program. Since recommencing stock repurchases nine years ago, the company has bought back $554 billion worth of its shares. Further, Apple has one of the largest nominal-dollar dividend payouts on the planet. Buffett has always been a fan of companies that return money to their shareholders. 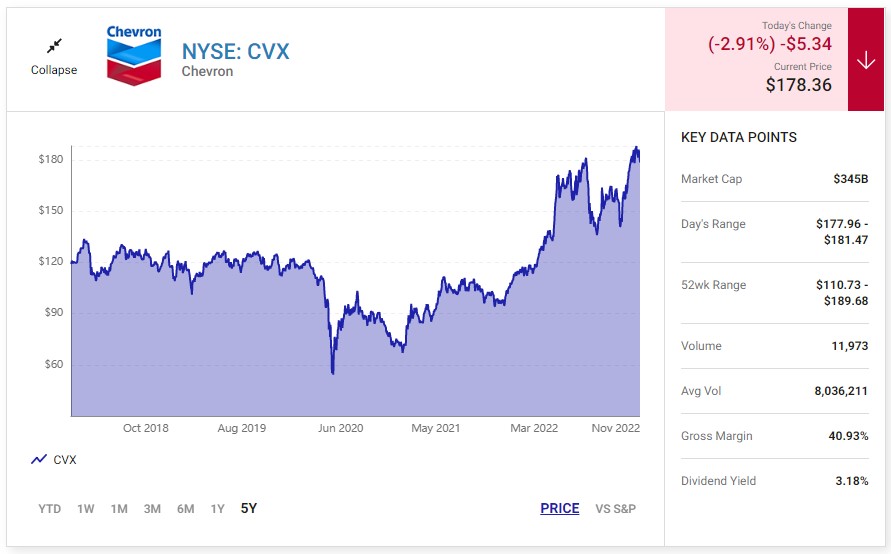 The other huge buy for Berkshire Hathaway’s portfolio has been energy stock Chevron. Since the fourth quarter of 2020, Buffett’s company has amassed more than 165.3 million shares, equating to about an 8.5% stake in Chevron. Using an estimated cost basis of $126.32 per share, provided by WhaleWisdom.com, works out to a $20.89 billion initial price tag for Berkshire’s position.

After having little or no role in Berkshire Hathaway’s portfolio for much of the past two decades, energy stocks are now the third-largest sector by weighting. This would almost certainly indicate that the Oracle of Omaha expects the price for energy commodities (oil, natural gas, and natural gas liquids) to remain well above their historic averages.

The biggest catalyst lifting the price of energy commodities is the globally challenged energy supply chain. Russia’s invasion of Ukraine has brought into question near-term oil and gas supply needs for Europe. Meanwhile, underinvestment in drilling, exploration, and infrastructure during the COVID-19 pandemic will make it difficult to increase supply as demand needs accelerate. This is all favorable for higher oil and natural gas prices.

As I’ve previously stated, Chevron’s integrated operating structure is another selling point. In addition to its high-margin drilling segment, it operates transmission pipelines, chemical plants, and refineries. Pipelines produce highly predictable cash flow, while downstream assets like chemical plants and refineries benefit from lower input costs and solid demand when the price of oil declines. In other words, Chevron is hedged for whatever the energy market throws its way.

And lest I forget, Chevron has a hearty capital-return program. The oil giant is expected to repurchase up to $15 billion of its common stock this year, and has raised its base annual payout for 35 consecutive years.

This stock has been an even more popular buy than Apple or Chevron
But what if I told you that neither Apple nor Chevron were the Oracle of Omaha’s biggest buys over the past six years? Better yet, what if I said that Buffett had bought more of a stock not listed on the company’s quarterly 13F filings than Apple and Chevron, combined?

According to Berkshire Hathaway’s third-quarter operating results, Warren Buffett and executive vice chairman Charlie Munger oversaw the repurchase of just over $1 billion worth of their own company’s Class A (BRK.A) shares. This comes atop $62.1 billion worth of Class A and Class B share buybacks between mid-2018 and mid-2022. Altogether, we’re talking about $63.1 billion put to work repurchasing Berkshire Hathaway stock. That’s $9 billion more than was spent buying shares of Apple and Chevron, combined, since 2016 began.

If you haven’t figured it out by now, Warren Buffett really loves stock buybacks and the benefits they bring to the table. For starters, buying back Berkshire Hathaway stock increases the ownership stake of each existing shareholder. What’s more, reducing the outstanding share count for companies with steady or growing net income (like Berkshire Hathaway) can lead to progressively higher earnings per share. This can make a stock more attractive to investors on a fundamental basis. 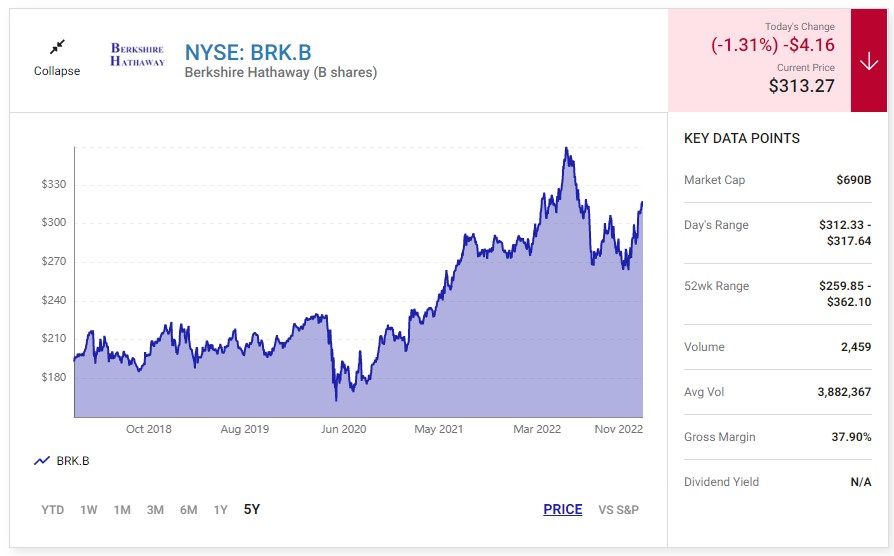 But more than anything, Warren Buffett buying back $63.1 billion worth of his own stock since mid-2018 is an indication that he’s more confident than ever in the foundation he’s laid for Berkshire Hathaway. The roughly five dozen companies Berkshire has acquired over many decades, as well as its $348 billion investment portfolio, are packed with cyclical businesses — i.e., companies that ebb-and-flow with the performance of the U.S. and/or global economy. Since periods of economic expansion have historically lasted considerably longer than recessions, Buffett’s patience is paying big dividends over time.

As long as the current bear market persists — and Berkshire Hathaway’s collective cash and U.S. Treasuries balance remains above the $30 billion required to execute buybacks — look for Buffett and his right-hand man Munger to keep their feet on the accelerator.