There is no one-size-fits-all strategy that has the potential to make investors wealthy over time, but there are few approaches that have a better track record of success than investing in dividend stocks.

Companies that pay dividends are often successful, profitable businesses — year in, year out — which have generally proven over time that they can withstand market cycles and recessions. They also have a bright-line history of outperforming their peers that don’t pay a dividend.

The asset managers at Hartford Financial Services looked at the performance of the benchmark S&P 500 going all the way back to 1930 and found there was not a single decade in which dividend stocks in the index didn’t generate positive returns, even when the broader market was losing money for investors.

Dividend growth for the win
From 1973 on, the study also found stocks that grew their dividend or initiated one far outperformed every other category of stock, especially those that didn’t pay one, and even worse, those that cut or eliminated their payout. Dividend growers returned 10.7% annually, on average, versus 4.8% for non-payers (and negative 0.5% for those that cut or eliminated the dividend). The S&P 500 itself returned 8.2% annually.

It’s one reason why Dividend Aristocrats are such potent stocks. They are S&P 500 stocks that have raised their dividend every year for at least 25 years, and they tend to have higher yields than the average index stock (2.5% vs. 1.5%), offer lower risk, and — especially pertinent to today’s investment climate — outperform the index 70% of the time in months when the S&P 500 declines.

As part of a core holding in your portfolio, the following eight Dividend Aristocrats could offer you a lifetime of income.

AbbVie
AbbVie (ABBV) is not your typical Dividend Aristocrat because Standard & Poor’s allows spinoffs to absorb the dividend history of their former parent company. Since the pharmaceutical stock was spun off from Abbott Laboratories (ABT) (another Dividend Aristocrat) in 2013, AbbVie enjoys the double-dipping afforded by the rules and is credited with some 50 years of dividend payments. 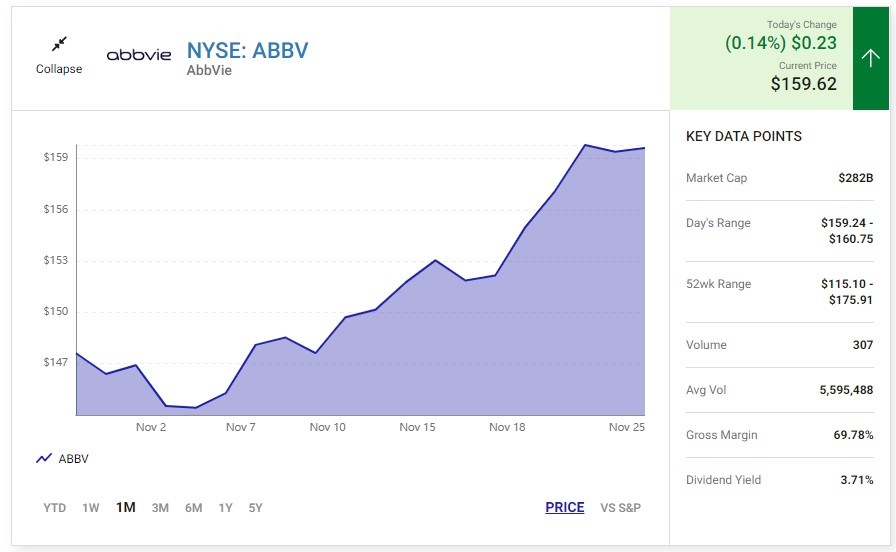 While the drug developer has been paying dividends independently for only a relatively short time, AbbVie has rewarded shareholders by increasing the payout every year so that it has hiked its value from the original quarterly dividend of $0.40 per share to its current level of $1.48 per share, a near fourfold increase in nine years. The dividend yields 3.7% annually.

With a robust pipeline of drugs as well as its legacy Humira treatment for rheumatoid arthritis lining up multiple additional indications in the U.S. and abroad, AbbVie still offers plenty of growth for years to come.

Amcor
Born of a merger with U.S.-based Bemis in 2019, U.K.-based Amcor (AMCR) makes flexible packaging for food, beverage, pharmaceuticals, and personal care products. While some fear a recession could impact growth, Amcor notes consumer preference for smaller, more affordable items actually drives more packaging usage. It has been hit by inflation, unfavorable currency exchange rates, and supply chain issues, only some of which it was able to offset by price increases.

Amcor recently lowered its guidance for its fiscal year due to the U.S. dollar’s strength, but it expects to produce between $1 billion and $1.1 billion in free cash flow. The packaging specialist’s dividend of $0.49 per share currently yields 4.1% annually, which should provide investors with plenty of income to offset any short-term impact on the stock price.

Consolidated Edison
Regulated electric utility Consolidated Edison (ED), also known as ConEd, has increased its dividend for 48 consecutive years, the longest streak for any utility in the S&P 500 index. It means it is poised to become a Dividend King in short order, or a stock that has raised its payout for 50 or more years (S&P 500 membership not required).

ConEd recently beat analyst earnings and revenue estimates for the third quarter as its deeply protected competitive moat and recession-resistant business delivered gains, though the prospect for persistent inflation could lead to consumers economizing on their heating bills even during a cold winter. Commercial customers might be affected by an economic downturn, but the overall impact ought to be muted.

The electric, gas, and steam delivery utility recently announced it would be selling its clean energy business and using the proceeds to pay down debt. Its annual dividend of $3.16 per share yields 3.3%.

Chevron
One of the biggest and best-run oil and gas giants, Chevron (CVX) is reporting record earnings on elevated pricing, limited supply, and continuing global uncertainty about Russia’s invasion of Ukraine and the resulting sanctions that were imposed on Russian oil.

Despite this, Chevron stock remains cheap. It trades at 10 times trailing earnings and next year’s estimates, a fraction of its projected earnings growth rate, and just 14 times the free cash flow it produces.

Fossil fuels still have a long opportunity for growth because, despite warnings of peak oil (which you don’t hear too much about anymore) and the advent of alternative fuels, oil and gas are far too ingrained to simply shut off. There’s also not the capacity available to replace fossil fuels with so-called clean energy, sources that have a fair amount of negative environmental impact themselves. Yet Chevron is also ramping up production of such sources and is spending about $2 billion through 2028 on decarbonization projects.

In addition to a cheap stock, Chevron’s dividend yields 3.1% today and the company has bought back $7.5 billion worth of stock so far this year.

McDonald’s
McDonald’s (MCD) is the largest restaurant chain in the world and it’s still growing as the fast-food giant continues to resonate with consumers. It is seeing greater store traffic in all the regions in which it operates while also enjoying double-digit same-store sales growth.

Heading into a potential recessionary period marked with high inflation, the value-priced food that McDonald’s sells could help consumers get good value for a decent tasty meal. While its own costs have increased as a result, impacting margins, CEO Chris Kempczinski said, “We are operating from a position of competitive strength.”

Having perfected the drive-thru concept, McDonald’s is leaning hard into its mobile and delivery strategies, which has been paying off with its stock. The shares trade near all-time highs, which might have investors worried about buying at the top, but that can be alleviated by waiting for a dip if one so chooses. A dollar-cost averaging approach could also be a benefit while investors enjoy its $6.08-per-share dividend, which yields 2.2% annually.

Stanley Black & Decker
Toolmaker Stanley Black & Decker (SWK) has been getting hammered as the housing market slowed and then began to fall, but that is also forcing the company to get leaner and focus more intently on its core business in a bid to align with current conditions.

Yet with a business history extending back nearly 150 years, Stanley has been through such business cycles before and has weathered them without issue. In the process, it has grown and now owns some of the biggest and best brands in the industry, including Craftsman, DeWalt, Bostitch, and Porter-Cable, not to mention Stanley and Black & Decker.

Stanley trades at less than 18 times next year’s earnings estimates and just a fraction of its sales, while paying a dividend as it has every year for the past 146 years. And it’s increased that payout for 55 straight years. The dividend currently yields an attractive 3.9% annually. 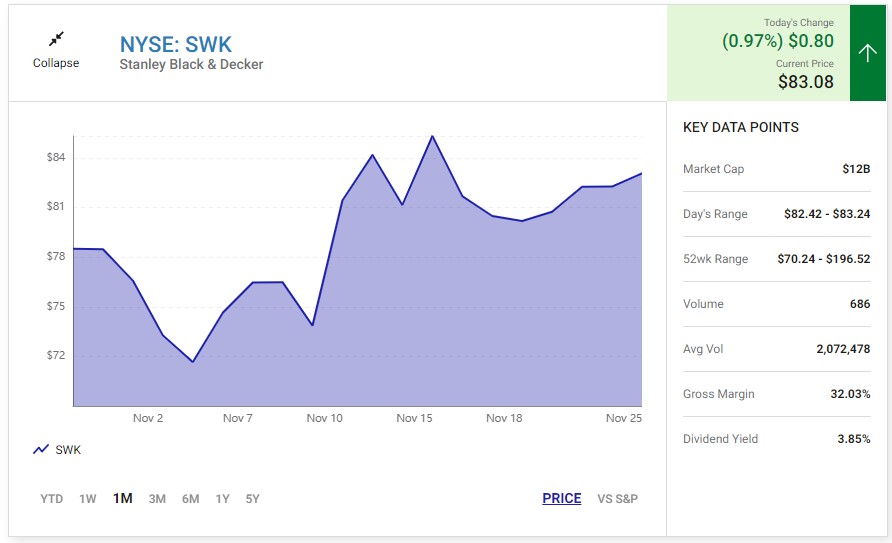 Sysco
Food service distributor Sysco (SYY) could be affected by a recession as it would impact how many people are eating away from home, whether that’s at a restaurant, a hospital, a school, or a hotel. Inflation and high gas costs would also impact its truck-heavy delivery business.

Yet business is still growing, and though it fell short of analyst expectations in the latest quarter, people still need to eat. It has been through these kinds of downturns before and has always bounced back, and there’s nothing indicating it won’t do so again. It may also be a fortuitous time as the industry is highly fragmented with many smaller players that could become potential takeover targets, allowing Sysco to build up its position in new markets.

Its stock had been down 20% year to date just two months ago, but has marched back strongly as expected, and now Sysco is riding 10% above where it started the year. Even so, it goes for 18 times earnings estimates and a fraction of its sales, which when coupled with its history of dividend payments makes it a good long-term buy.

Walmart
Walmart (WMT) will come into its own once again if a recession does hit. It’s already seeing robust growth, particularly in groceries, as consumers seek out its everyday low prices to make their budgets go further. The retailer is even seeing customers with household incomes north of $100,000 shopping its stores, showing how much its value proposition appeals to consumers of all economic backgrounds. 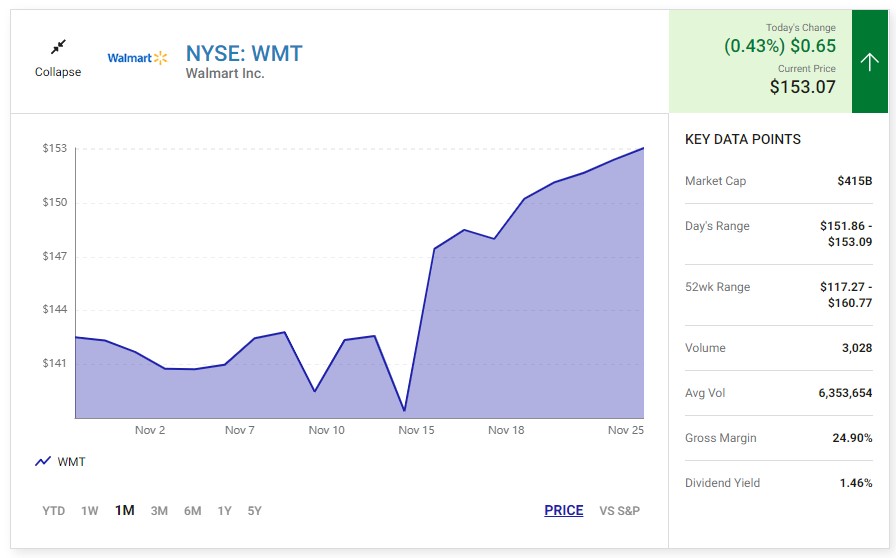 It stands in stark contrast to how rival Target (TGT) has fared, and is likely because Walmart is a consumer staples stock and Target a consumer discretionary one. When the markets and economy rebound, as they inevitably will, Target (also a Dividend Aristocrat) will likely come into its own once again as consumers pursue the higher-margin items for which the mass merchandise retailer is known.

For now, though, they’ll be sticking with the store that gives them across-the-board good value, and that means — especially in a recession — Walmart will be a leader. With a dividend yielding 1.5% that it’s paid and increased for almost 50 years, this discount king should soon be a Dividend King as well.