This year hasn’t gone as expected for many investors. Following one of the lowest-volatility years in recent history, 2022 has featured the worst year for the bond market on record, as well as an across-the-board bear market for the Dow Jones Industrial Average, S&P 500, and Nasdaq Composite. Chances are you’re looking at a sea of red — and you’re not alone.

However, big declines in the stock market have, historically, been blessings in disguise. If you’re a long-term investor, stock market corrections, crashes, and bear markets represent opportunities to pounce on high-quality companies at reduced valuations. The current bear market may well be a generational wealth-building opportunity for patient investors.

What follows are five surefire stocks that have the competitive advantages and sustained catalysts necessary to generate life-changing wealth over the next 20 years.

China is the world’s No. 1 auto market — yet EV market share within China remains up for grabs. Based on an estimate from the China Society of Automotive Engineers, more than half of all new vehicles sold in China by 2035 should be new energy vehicles, with EVs leading the charge. Once supply chain issues ease, Nio should have no trouble quickly ramping up production.

On the innovation front, Nio is being driven by the introduction of more than a half-dozen EV models. The recently introduced ET7 and ET5 sedans, which respectively began deliveries in March and September, are going head-to-head with Tesla’s (TSLA) flagship Model 3 and can handily outpace the world’s largest automaker in terms of range (with a battery pack upgrade). The mid-size ET5, in particular, should help accelerate Nio’s sales during the fourth quarter.

Furthermore, Nio is utilizing unconventional methods to position itself for long-term success. The company’s battery-as-a-service subscription reduces the purchase price of its EVs and allows buyers to upgrade their batteries at a later date. In exchange for giving up some near-term revenue, Nio is locking in the loyalty of its early buyers and generating sustained high-margin subscription revenue. 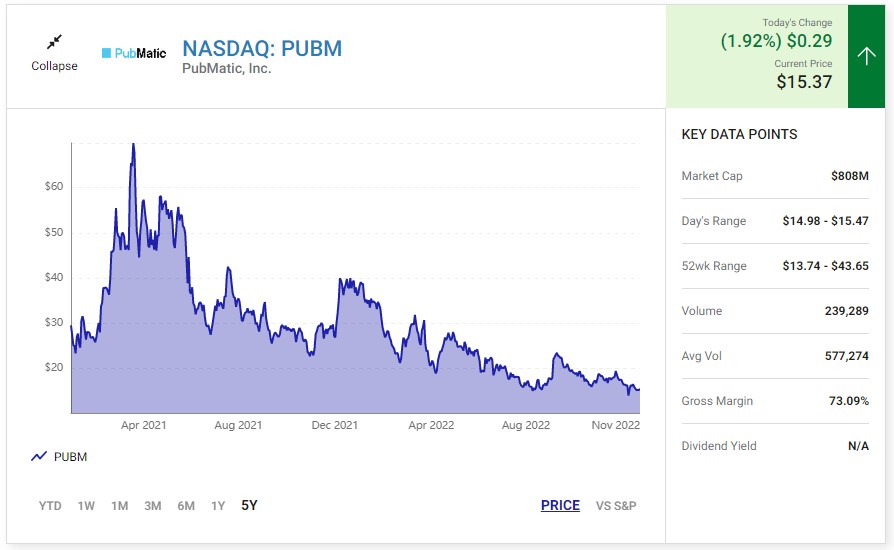 PubMatic
For something a bit more off the radar, consider adtech stock PubMatic (PUBM) as an innovator that can deliver phenomenal returns over the coming 20 years. Although advertising stocks have been hit hard in 2022, you can rest assured that the ad industry isn’t going anywhere.

On a macro basis, it’s important to recognize that patient investors tend to do very well with ad-driven stocks. Although recessions are an inevitable part of the economic cycle, periods of expansion last much, much longer than recessions.

But what really favors cloud-based programmatic ad platform PubMatic is the steady shift to digital advertising (i.e., video, mobile, and over-the-top (OTT) programmatic ads) from print and billboards. The digital ad industry is expected to grow by an average annual rate of 14% through mid-decade, and PubMatic has been growing at an even faster clip, thanks largely to OTT ads. It also doesn’t hurt that there’s been a lot of consolidation among sell-side providers (SSPs) — SSPs help publishers sell their digital display space — meaning there are few options beyond PubMatic.

But as I’ve previously pointed out, the best thing about PubMatic was its decision to design and build its own cloud-based infrastructure. Not having to rely on a third party for its platform is a big deal. As revenue scales, PubMatic should recognize substantially higher operating margins than its peers.

Based on a recent report from Fortune Business Insights, the global mobile payment market is expected to grow by a jaw-dropping 29.1% annually between 2021 and 2028. In nominal-dollar terms, we’re talking about a climb from about $2 trillion worldwide in 2021 to roughly $11.8 trillion by 2028. The key point is that we’re still witnessing the early innings of growth for digital transactions.

Something else worth noting is that PayPal’s key performance metrics are still incredibly strong, even in the face of a challenging economic environment. Total payment volume, sans currency movements, has been increasing by a low double-digit percentage while active account engagement keeps climbing. Over the trailing 12 months, active accounts averaged 50.1 transactions. That’s up 25% since the end of 2020.

PayPal also has levers it can pull to improve its business. It’s aiming to reduce annual operating expenses by $1.3 billion in 2023 to counter what should be temporary economic weakness. At the same time, the company completed the $2.7 billion acquisition of Japan’s buy now, pay later (BNPL) platform Paidy in 2021. BNPL provides merchants with another tool to grow their business, which in turn should encourage more transactions on PayPal’s digital payment networks. 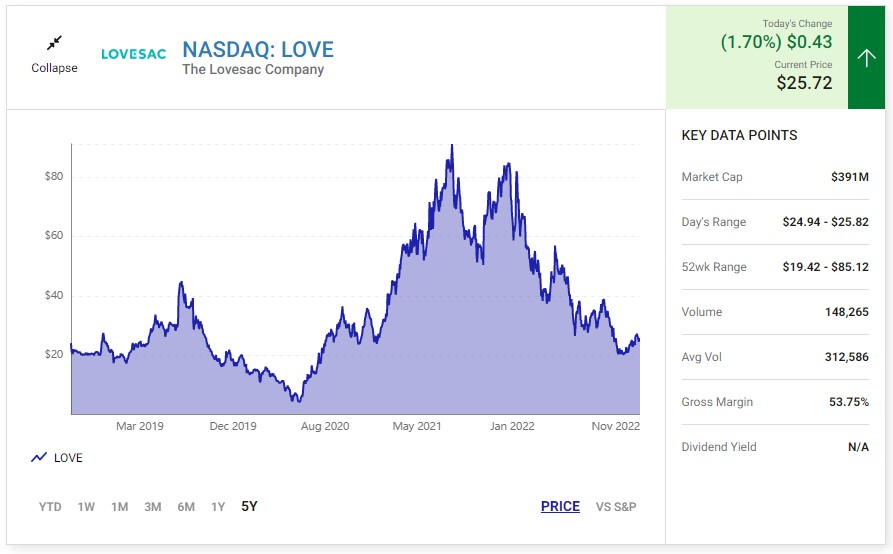 Lovesac
Furniture stock Lovesac (LOVE) is another lesser-known company that has the potential to make long-term investors substantially richer over the next 20 years. Lovesac brings clearly defined competitive advantages and innovation to the table in a traditionally boring industry.

The first thing to note about Lovesac is that its products are truly different. Nearly 88% of its net revenue is derived from selling “sactionals” — modular couches that can be rearranged in dozens of ways to fit most living spaces. Sactionals come with over 200 different cover choices, meaning they’ll match the theme of any household. Additionally, the yarn in sactionals is made entirely from recycled plastic water bottles. It’s eco-friendly furniture with optimal choice and functionality.

It’s also furniture that generally targets a more affluent clientele. The good thing about having a higher-income customer is they’re less likely to be adversely impacted by inflation or minor economic disruptions. In other words, Lovesac is better positioned than most furniture retailers to weather downturns.

The other huge difference between Lovesac and traditional furniture retailers is Lovesac’s nimble omnichannel sales platform. During the pandemic, Lovesac shifted close to half of its sales online. Even though the company operates 174 retail locations in 40 states, online sales, popup showrooms, and brand-name partnerships all play key roles in moving its products and keeping its overhead expenses down. 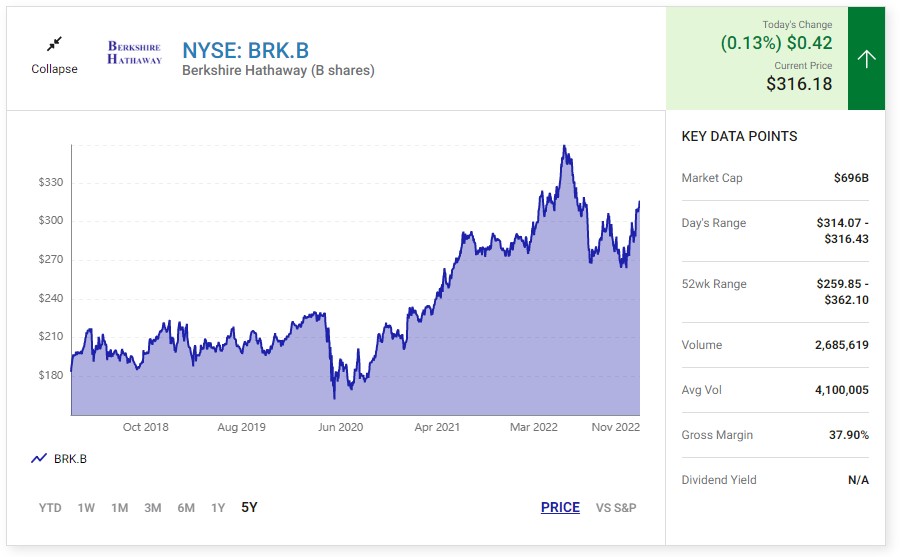 Berkshire Hathaway
The fifth and final surefire stock that can generate life-changing wealth in 20 years is conglomerate Berkshire Hathaway (BRK.A) (BRK.B). Though Berkshire isn’t exactly a household name, its CEO, billionaire Warren Buffett, is considered to be one of the greatest investors of all time.

One of the biggest advantages of buying Berkshire Hathaway stock is (in a roundabout way) getting Warren Buffett as your portfolio manager. Since becoming CEO in 1965, he’s led his company’s Class A shares (BRK.A) to an average annual return of 20.1%. That’s nearly double the average annual total return of 10.5% for the S&P 500, including dividends paid, over the same time frame.

However, it’s the company’s cyclical ties and reliance on dividend stocks that make it special. Cyclical stocks move in lockstep with the U.S. and global economy. They struggle during recessions and excel during periods of expansion. Because these expansions are disproportionately longer than recessions, Warren Buffett has positioned Berkshire Hathaway’s investment portfolio and owned businesses to thrive over long periods.

Buffett’s company is also raking in some serious dividend income. Over the next 12 months, Berkshire Hathaway should collect more than $6 billion from dividends. Companies that regularly pay a dividend have historically outperformed over the long run, which is yet another feather in the cap for Warren Buffett’s investment portfolio.