The “sharks” were circling…

Julia Cheek didn’t get overwhelmed, however. She stood in front of all five of them – all of whom had earned their vicious reputations – and managed to keep her composure.

Over the next few minutes, Cheek was bombarded with questions. She responded each time without hesitation. And even after four sharks rejected her – including renowned billionaire investor Mark Cuban – she wasn’t fazed. One reporter later described her as “the epitome of poise and sophistication.”

Eventually, her calm nature paid off. She got the last shark to bite – entrepreneur Lori Greiner.

It was 2017… And Cheek was on the hit TV show Shark Tank. She pitched her at-home health-testing company Everlywell to the five investors, hoping to secure financing.

The deal she made with Greiner was for a $1 million line of credit at 8% interest. Greiner also received 5% equity of the business.

Cheek’s pitch for Everlywell was simple… Each year, millions of Americans avoid some type of lab testing because of high or unknown costs. They also don’t want to make the trip to the doctor’s office only to wait around for an hour in a room full of sick people.

With Everlywell’s testing kits, you order a test online or go pick it up from your local drugstore. You then follow the testing instructions, send it back in the mail, and wait a few days for the results to come in. It’s simple. No doctor visit required. And the whole time, you’ll know exactly what you’re going to pay.

The show has millions of viewers. So when Cheek’s episode aired, the company instantly had access to a massive potential customer base.

The future is creating a huge space for self-directed, data-driven health care. And that’s exactly what the big fish in the ocean are betting on…

With Everlywell, Cheek and Greiner were latching onto a megatrend we’ve identified – the boom in the life-sciences industry.

After Shark Tank, the investor dollars continued to roll in for Everlywell. Big-name investment firms like BlackRock, Lux Capital, and Goodwater Capital all handed over their checkbooks. Everlywell has raised about $250 million from outside investors.

Silicon Valley is all-in on the life-sciences boom.

“Life science” refers to companies related to the research side of medical care… pharmaceutical and biotech companies that develop new treatments, and the supply chain they rely on.

The convergence of life sciences with Big Data and other technologies like artificial intelligence is finally coming into focus. Regulators are approving more drugs every day… as researchers create new treatments to help save lives.

This story has ramped up over the past few years.

The number of patents issued in the U.S. has more than doubled since 2008. This shows that the rate of scientific advancement is across the board, and many of these patents are in the health care space. Take a look… 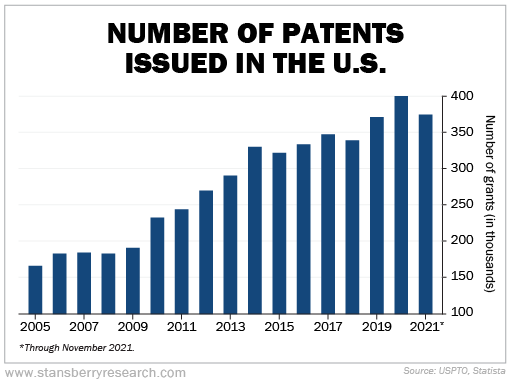 Spending has also skyrocketed over time.

A record $70 billion of private and public capital – mostly venture capital and initial public offerings (“IPOs”) – poured into the life-sciences industry in 2020. The previous record came in 2018 with total spending of $36 billion… So spending nearly doubled in that short window of time.

COVID-19 played a big role in this. With the success of the COVID-19 mRNA vaccine technology, many researchers and scientists have been encouraged by the advancement of technology to fight infectious diseases, cancers, and more.

We’ve seen a slowdown in IPOs in 2022. Economic headwinds have gotten in the way – for now. But with the long-term trend in life sciences, we should see this as a buying opportunity…

When early-stage companies in biotech are struggling, the outcome is simple – the sharks will eat. Bigger fish in the markets will be looking to scoop up all kinds of promising tech for a fraction of its value.

For investors like ourselves, this is a rare and exciting time… It’s a time when investors should get greedy.

Money is going to keep rolling into life-sciences companies for a long time. This boom is in its early innings… So be ready for a potentially life-changing opportunity.