Since its official debut in May 1896, the Dow Jones Industrial Average (^DJI) has served as arguably the most-watched barometer of the stock market’s health. Over 126 years, the Dow Jones has expanded from an index that housed 12 mostly industrial stocks to one that today is home to 30 diverse businesses.

Even though the Dow has its flaws — it’s a share price-weighted index, rather than a market cap-weighted index — it’s packed with mature, profitable business that almost always pay a dividend and know how to reward patient shareholders. As of this past weekend, 27 of the 30 Dow components were doling out a regular dividend.

But no two dividend stocks are created equally — even within this timeless index. Among the 27 Dow components paying a dividend are six high-yield stocks (those with yields of 4% or above). Three of these high-yield Dow Jones Industrial Average stocks are screaming buys at their current price.

Intel: 4.89% yield
The first Dow stock with a supercharged yield that’s begging to be bought is semiconductor giant Intel (INTC). Though Intel has bounced a bit off of its recent low, its 4.9% yield is well above its historic average.

Like pretty much all chipmakers, Intel is being weighed down by the growing likelihood of a recession in the U.S., as well as ongoing supply chain constraints, which have hurt demand. Intel has also lost some of its market share to rival Advanced Micro Devices (AMD). This combination of factors recently pushed Intel stock to its lowest level in more than eight years. But that pain can be your gain. 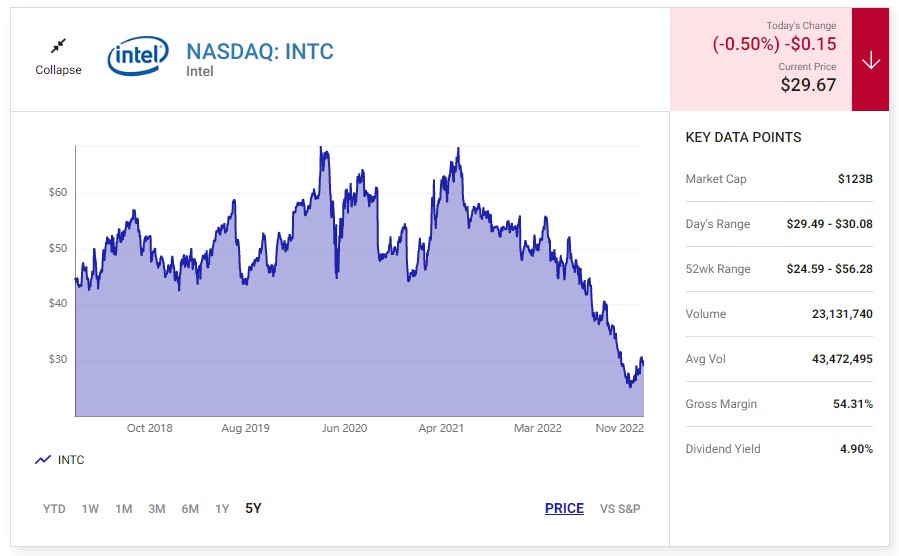 According to a report by management consulting firm McKinsey & Co., the global semiconductor industry should surpass $1 trillion in value by 2030. This suggests a compound annual growth rate of 6% to 8% over the next eight years. While that might not be a jaw-dropping growth rate, it supports the idea that more products are becoming tech dependent as time passes. As the largest provider of central processing units (CPUs), Intel is well positioned to benefit.

To address the elephant in the room, Intel has, indeed, been losing some of its market share to AMD. But the magnitude of this loss appears overblown. For personal computers, mobile, and data center servers, Intel is still the unquestioned share leader by a significant amount. Translation: Intel’s competitive advantage is securing abundant future cash flow, which the company can use to reward shareholders or reinvest in high-growth initiatives.

One of the most exciting ways Intel is putting money to work right now is happening in Ohio. The company recently broke ground on two chip manufacturing plants (a more than $20 billion expense) that are set to open in 2024. Considering that the recently passed CHIPS and Science Act is designed to subsidize domestic chip manufacturing plant construction, Intel is incented to grow its foundry ambitions.

And don’t forget about autonomous vehicle company Mobileye Global (MBLY), which went public on Oct. 26. Intel acquired Mobileye in 2017 and has been the company’s fastest-growing operating segment.

Although Intel’s business isn’t going to turn on a dime, it’s well positioned to bounce back and reward patient investors. 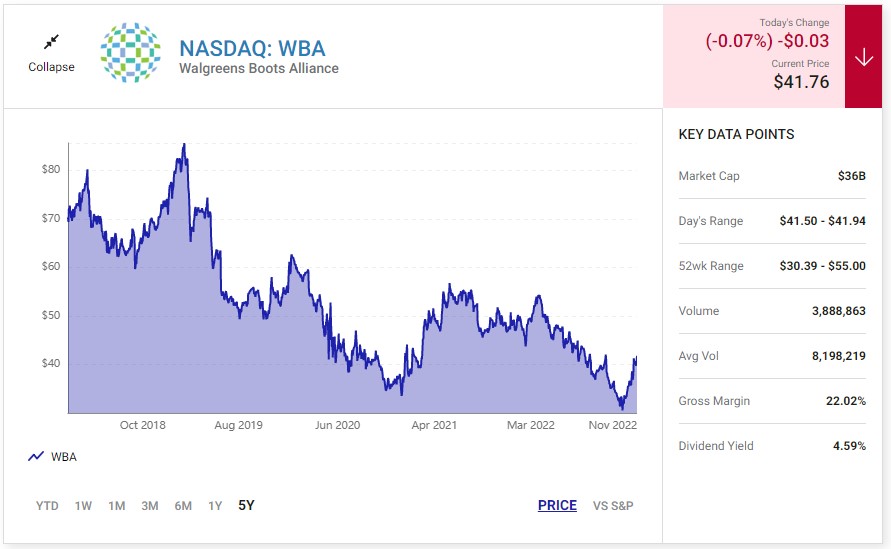 As I’ve pointed out, healthcare stocks are usually exempted from recessionary fears. Since we can’t control when we get sick or what ailment(s) we develop, there’s always demand for prescription drugs, medical devices, and healthcare services. But because Walgreens is so reliant on its physical stores, the COVID-19 pandemic made it an exception to this rule. Lockdowns put a short-term hurt on the company’s bottom line.

But there’s also good news. The worst of the pandemic looks to be in the rearview mirror, and Walgreens Boots Alliance has implemented a laundry list of changes designed to boost its operating efficiency, organic growth rate, and customer loyalty.

Unsurprisingly, cost cutting has been part of the plan. The company managed to reduce its annual operating expenses by more than $2 billion, a full year ahead of schedule. This cost cutting, coupled with the sale of its wholesale drug operations to AmerisourceBergen (ABC) in 2021 for about $6.5 billion, has helped the company lower its outstanding debt and improve its operating efficiency.

Just as important as cutting costs is noting where Walgreens is deploying its capital. It’s invested heavily in a variety of digitization initiatives designed to encourage online sales and drive-thru pickup. Despite remaining a brick-and-mortar-reliant company, Walgreens should be able to sustain double-digit digital sales growth for the foreseeable future.

Further, Walgreens Boots Alliance is working with VillageMD to open up to 1,000 full-service health clinics co-located at its stores in more than 30 U.S. markets. The duo aims to reach this total by the end of 2027. Being physician staffed is a true differentiator that should help drive repeat business and improve engagement at the local level.

With an improving balance sheet and a pathway to sustainably higher organic growth, Walgreens Boots Alliance looks like an amazing deal at roughly 9 times forecast earnings in fiscal 2023.

Whereas most tech stocks have thrived for more than a decade, Verizon has been a chronic underperformer. The company’s relatively slow growth rate and high debt load enticed investors to put their money to work in faster-growing companies. But with interest rates rising and access to cheap capital cut off, the cash-flow stability and superior yield Verizon offers makes it a stock to buy.

Like Intel, Verizon has macro headwinds working to its advantage. Over time, having wireless access and owning a smartphone have effectively become necessities. No matter how poorly the U.S. economy or stock market perform, churn rates for the company’s bread-and-butter wireless segment have remained near historic lows. 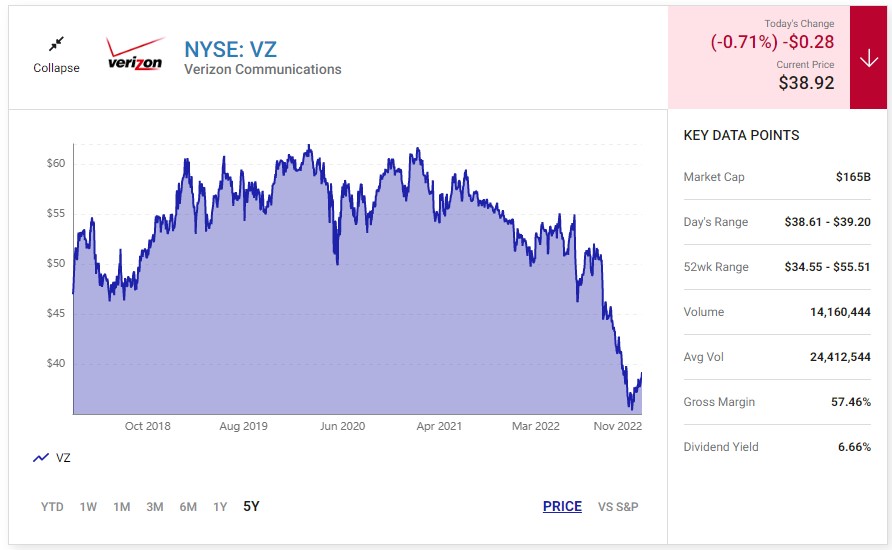 To add to this point, companies that provide basic necessity goods and services usually have exceptional pricing power. In June, Verizon was able to pass along a modest price increase to many of its consumer and business plans without any notable impact to its churn rate.

Verizon should also benefit from the 5G revolution for years to come. Prior to Verizon and its peers rolling out 5G wireless infrastructure upgrades, it had been around a decade since wireless download speeds were last meaningfully improved. This pent-up demand should entice businesses and consumers to upgrade their devices and consume more data. In short, Verizon’s costly 5G infrastructure upgrades should prove well worth it as high-margin data usage moves its profit needle higher.

Another reason Verizon’s organic growth rate can enjoy an uptick in the coming years is the company’s aggressive investment in C-Band spectrum. Last year, it spent nearly $53 billion to purchase (and more than double) its C-Band spectrum. The goal for Verizon is to reach 14 million businesses and 50 million households with 5G broadband services by the end of 2025. Broadband sales can generate consistent cash flow, as well as boost the company’s operating margin if bundled with other services.

Despite being a relatively slow-growing company, Verizon’s 6.8% yield and sustained organic catalysts give it a solid opportunity to deliver for long-term investors.